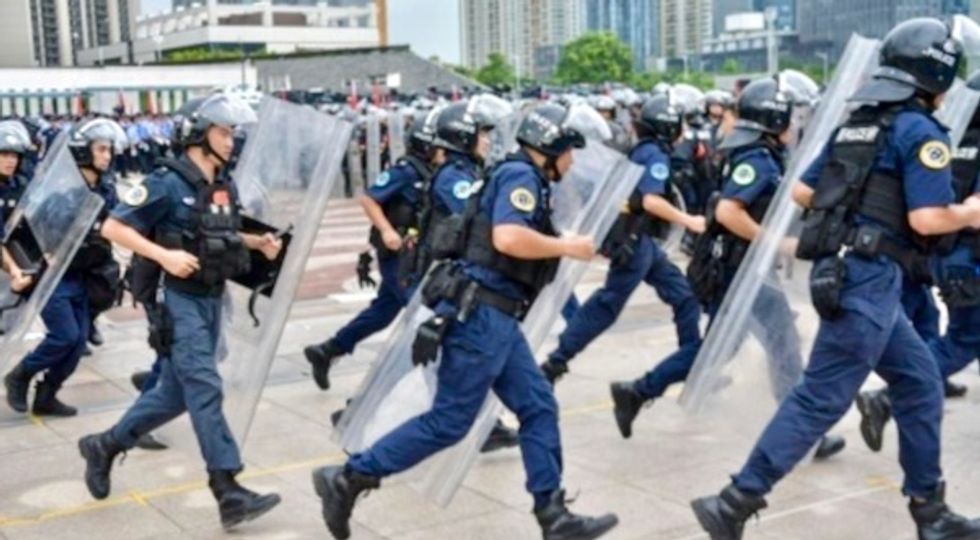 Thousands of Chinese riot police staged a drill just across the border from Hong Kong, in what appeared to be a thinly veiled warning from Beijing about its ability to end two months of protests in the global financial hub.

The exercise, which took place Tuesday in Shenzhen -- a city in southern China that borders the semi-autonomous city -- instantly attracted online attention given the close resemblance between the drill and the ongoing clashes in adjacent Hong Kong.

The footage showed squads of police facing down "protesters" dressed in construction hats and facemasks -- reminiscent of demonstrators in Hong Kong.

As the crowd attacked police with long, wooden poles, officers pushed back with riot shields and deployed tear gas.

"All police forces in Shenzhen are always ready!" Shenzhen police wrote in an online post about Tuesday's drills, which it said involved 12,000 police officers.

It is the second video in less than a week where Chinese security forces are shown cracking down on protesters -- fuelling speculation about a possible intervention by the military or mainland police in Hong Kong.

And though Shenzhen police said the anti-riot drills were organised as public security measures ahead of the 70th anniversary celebrations in October of the People's Republic of China, that hasn't stopped netizens from commenting on the similarities with Hong Kong.

Hong Kong has been plunged into its worst crisis in recent history after millions of demonstrators took to the streets -- and sporadic violent confrontations between police and pockets of hardcore protesters.

The demonstrations were triggered by a controversial bill which would have allowed extraditions to mainland China but have evolved into a call for wider democratic reforms.

On Tuesday, China's central government issued its harshest warning yet to Hong Kong protesters, and said "those who play with fire will perish by it."

The PLA has maintained a garrison in Hong Kong since the former British colony was returned to China in 1997, but its troops generally keep a low profile and are rarely seen in uniform in public.

According to Hong Kong's Basic Law, troops from mainland China can operate in the city if local authorities request it.

Hong Kong authorities may, "when necessary", ask the central government for assistance from the garrison "in the maintenance of public order and in disaster relief", according to Article 14.

Mainland police are not allowed to operate in the semi-autonomous city.

But Article 18 of that document allows the central government to effectively suspend Hong Kong's laws if there is a "state of war" or "turmoil" which "endangers national security or unity".