Christian conservative explains 'deal with devil' between Trump and evangelicals 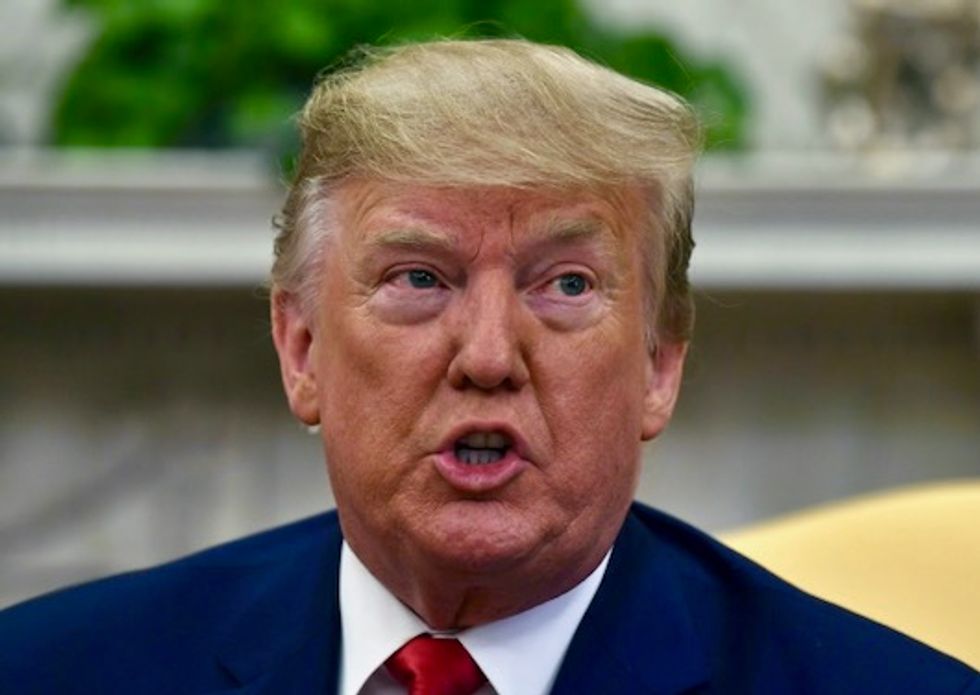 Evangelical Christians have been President Donald Trump's most loyal base of support. But the president offended their sensibilities at a rally in Greenville, North Carolina, during which he allowed the crowd to chant "Send her back!" after he falsely accused Rep. Ilhan Omar (D-MN) of anti-semitism.

But as The Politico reported, they weren't mad about the president goading his supporters into shouting about throwing a U.S. citizen out of the country. They were offended because Trump said, "Goddam" and used other profanities.

Raw Story spoke with Ben Howe, the author of The Immoral Majority: Why Evangelicals Chose Political Power over Christian Values. Howe, who identifies as a Christian conservative, explores how a movement that's supposed to elevate good character, morality and propriety, could back Trump.

Raw Story: So you highlighted the shocking statistic that a whopping 68 percent of White Protestants said the U.S. has no responsibility for refugees. Which doesn't seem very...Christian. How do they square that with traditional Christian values?

Ben Howe: I think it's a symptom of the merging of the political sphere and Evangelicalism. This has obviously gone on for decades. But in previous presidencies, let's say George W. Bush's presidency ... he, from the perspective of a Christian, and the policies that he was offering, like 'compassionate conservatism' and things like that, it might have been easier to comport their Christian values to what he was doing and saying.

Of course, there were other things like the Iraq war, but we have a long history of being to rationalize war when we choose.

When Trump not only ran for president but once he got elected, the merging of Republicanism and Evangelicalism was so complete that there's a team player aspect to it. But ultimately why does that union exist in the first place?It exists because just like anyone Christians are capable of being self-absorbed, selfish. Carrying more about their own stuff, their own lives. Which could be fine, if it's not at the expense of others, which is what the Bible asks them to keep in mind.

But, they want to win. They certainly don't want to lose on specific policy issues that are important to them. And that creates a rhetoric and rationalization that spreads throughout the community, it takes hold. So I think these people just have adopted what is in a lot of ways standard Republican line at this point. And they're choosing to view it as compartmentalization. So, to them it's a political issue, or a foreign policy issue, we don't have to bring our religion into it. But that goes against the typical teaching of putting God first, even ahead of those kinds of concerns.

Raw Story: So it strikes me based on your work this is race-based. You point out that they were more amenable to Syrian refugees than refugees from Latin America?

Ben Howe: I'm not sure I would agree that it's race-based. This is why. When ... it's more culturally based. OK, this, at least, is the argument that they would make. They're not complaining about people coming from Norway or Finland or something like that. The argument is fear-based. And they view ... and obviously Trump has fostered this. They have a fear as relates to these tumultuous areas that people are fleeing from. And in their view, there is a danger in letting anyone in. Now, that's not to say that there's no racial component. I'm on record saying there are a ton of racial components on the Right. And there are a ton of issues with people I'd call overtly racist and then other people who are truly convinced they aren't ... but do all of the things a racist would do anyway. So that problem persists. But the reason that I feel it's inadequate to address the situation ... is that they don't hear it. They have their rationalizations ready to go. And they deflect the racism. And they deflect the charge of racism to such a degree that when it comes to Evangelicals it should be easier to identify forget your reason for not wanting to do this. You have a Biblical reason for wanting to do this, for wanting to help, for wanting to accept refugees who are running from a frightening regime or a scary situation. So, between Syria and Mexico...I would say there's a proximity issue as well. But primarily it's that when we're talking about Syrian refugees, it's not framed as a crisis at the border. For them, refugees coming from the South are more tied to that.

Ben Howe: Yeah it's the difference between sovereignty and hoarding ... you know, like 'America has wealth, possessions, land, jobs and there's, you know, there is technically a limited amount of all of those things. And anybody who comes in they see as infringing on that. A lot of them are fine with legal immigration. But many who say they're fine with legal immigration also repeat rhetoric that makes it clear they're not fine with legal immigration. So it's one of the reasons I find it difficult sometimes to identify the specific motive. Because they don't like to us, they lie to themselves. And it makes it hard sometimes to nail it down and make a convincing argument that they should change because they don't believe they're doing the thing you're saying they're doing.

That's like pretty philosophical, that's how I see it.

Raw Story: So, a few weeks ago it came out that Trump had parted with Jeffrey Epstein. What is this deal with the devil Evangelicals are doing where like why would they support someone whose values are so contrary to Christian values?

Ben Howe: In the beginning of my book, I talk about when Jerry Falwell Jr. posed in front of a Playboy magazine to give a thumbs up with Trump. And you know at the time it was shocking to me. I'd gone to his dad's church as a kid, where his father was leading the charge against pornography basically.

And so when I offered my thought is that, Trump can be whoever he wants. The question for Falwell Jr. is, does posing in front of Playboy with Trump does this align with your father's legacy is supposedly about?

When Clinton was revealed for his various antics, the economy was good. We living under a peace dividend. The Soviet Union fell. Yet, Dobson, and Falwell Sr., Ralph Reed, Pat Robertson, all these guys came out and said, 'Let's not let these factors like the economy make us lose sight of the fact that the character of the president is important. And then of course with Trump it was the reverse!

They had a new tactic, which was 'God can change a person! And redemption!' All that good Biblical stuff, which is all true from my point of view. Except that there's normally there's some indication that's what actually happened. And if you were to compare ... I'm not going to compare what Clinton's done to what Trump has done directly and try to figure out which one is worse ... But I will say that Clinton ... if we were to just compare the two in terms of a redemption story why ... .is Clinton still considered a scumbag?

Raw Story: Well he does have a rape accusation against him. Which he's never apologized for.

Ben Howe: Well, no. And the Central Part Five also is something that he hasn't apologized for even though they were innocent.

Raw Story: Oh ha I meant Clinton, the Juanita Broaddrick allegations. But yes, Trump too has credible rape accusations against him.

Ben Howe: That's really sad that when you said 'He has credible rape charges against him' it applied to both presidents. But right. He's got this record as well. But, in the very least, you know, he's apologized. You could call it fake, but he did. With Trump, he hasn't even offered that. He has a story without any redemptive arc that I'm aware of that he's ever expressed. So you know ... why have they made this deal? They've made this deal because in the end while they care about abortion and religious liberty and so on, the polling shows that their interests are actually not quite the way they present it. They don't hold their nose at people like Trump or any Republican in the hopes that they'll get their way on abortion or religious liberty.

Their top priorities are the economy, terrorism, immigration and typical Republican issues that mostly relate to their own lives -- what matters to them personally. Which ... again would be fine if it wasn't at the cost of other things, especially if those are the things that they claim they're doing this for. So, it's a transactional relationship. They describe it as transactional. But there's no transaction. He just keep being exactly who he is and doing exactly what he's done, and they just keep giving him their undying devotion. So I don't know what the transaction is, it sounds more like a sale.

They call themselves the Moral Majority. They were claiming that these issues were their top consideration and they were so important that they had to go to Washington to make sure they were as important to people in Washington as they were to them. But by the time Trump came along, they were kind of like "eh." Let's get tax cuts, and you know, that's fine. Whatever, we don't care about the character stuff anymore, as long as we get what we want.