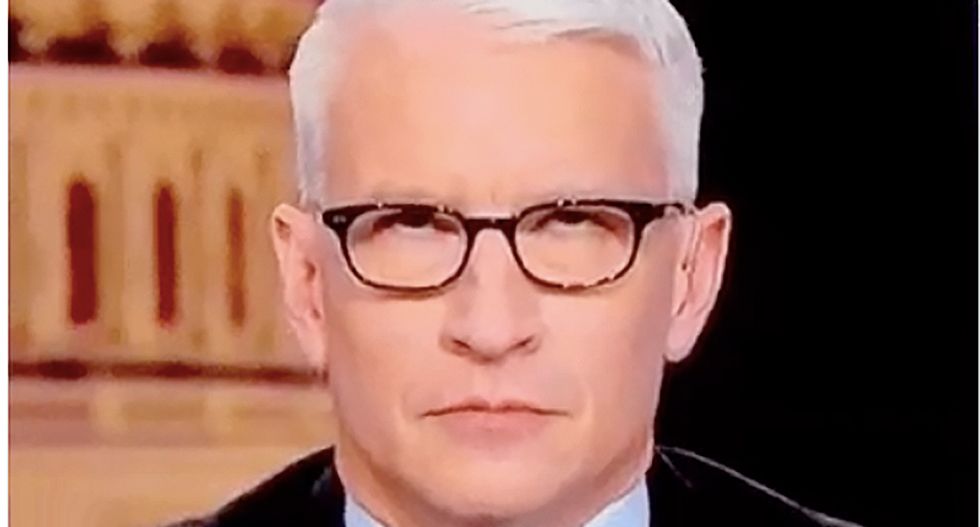 "I want to play you this clip from yesterday, because of how well it shows where his head still seems to be nearly three years after election night," said Cooper. "It was in response to a question about banning high-capacity magazines. First, he quickly changed the subject to mental health, and then, well, take a look."

"The concept of mental institution has to be looked at," said Trump in the clip. "Unrelated to that, I believe that the concept also of voter identification has to be looked at because you can't have great security for the voter. People that vote, you can't have that national security unless you can have voter identification. It's something people have to look at very strongly."

"What does that have to do with guns? Nothing," said Cooper. "He said the worst segue ever, a segue to clearly what he wanted to talk about, which is voter fraud, that says has nothing to do what I was talking about. Voter fraud is not a thing, as the president continued to claim it is, but still keeps hammering away at it," said Cooper. "Today he tweeted 'Wow, Report Just Out! Google manipulated from 2.6 million to 16 million votes for Hillary Clinton in 2016 Election! This was put out by a Clinton supporter, not a Trump Supporter! Google should be sued. My victory was even bigger than thought!'"

"So this takes a little bit of explaining, but the bottom line is, the thing he's saying is not accurate," said Cooper. "CNN fact-checker Daniel Dale spoke with the researcher, Robert Epstein, behind the work the president was referring to. He said the president was wrong in saying that Google manipulated votes or even search results. And his study — which we should add is highly disputed, not peer reviewed — claims that Google search algorithms have been influencing voters. In Senate testimony, Epstein said the search results were 'biased to favor Hillary Clinton' over the course of 25 days that he studied. Problem is, he never says what 'biased in favor of Hillary Clinton' actually means, or how he extrapolates that it could have influenced at least 2.6 million votes for Hillary Clinton in 2016."

"So the whole thing is flimsy at best, but it was certainly enough for the president to hop on one of his favorite hobby horses, which is voter fraud," said Cooper. "I just want to quickly follow the hoof marks for you. First, he trotted out the unfounded claims that millions of illegal immigrants voted for Clinton. Then he went for a canter with a voter fraud commission to establish that that had happened, which subsequently fell apart because there was no evidence to find. By last week, nearly three years after the election, after which we said he won was back on the horse at full gallop."

"New Hampshire should be have been won, but we had a lot of people come in at the last moment which was a rather strange situation," said Trump in the clip. "Thousands and thousands of people coming in from locations unknown, but I knew where the location was."

"Okay. I don't know what that means," said Cooper. "'Locations unknown. I knew where the locations were.' It's made up and doesn't make actual sense, but something the president said. And I know it seems normal and we think 'That's how presidents talk,' but just for the record it's not."