CNN's Chris Cuomo gets emotional interviewing shooting survivor: ‘If I could trade my life...’ 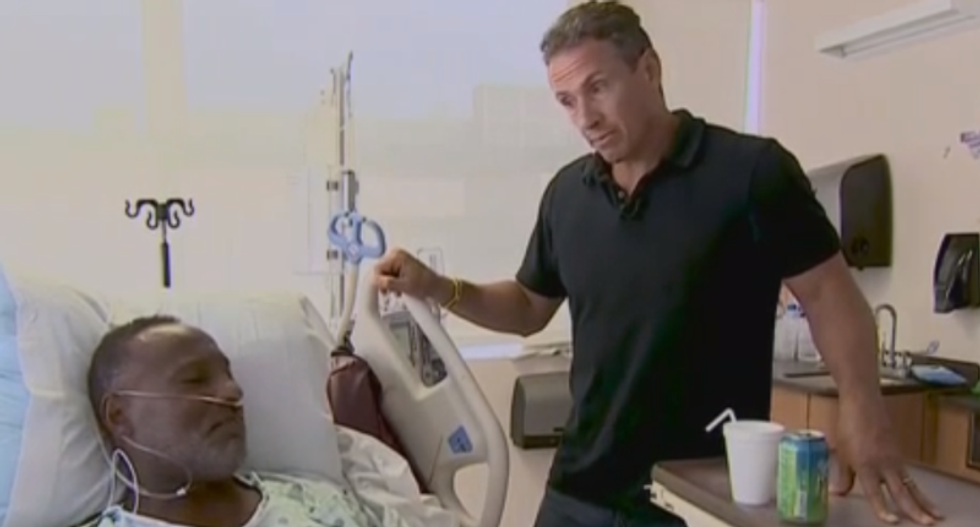 On Monday, CNN's Chris Cuomo teared up as he spoke to Christopher Grant, a survivor of the El Paso shooting who took a bullet to try to help others get out safely, from his hospital bed.

"You saw this man firing at people and you threw things at him to get his attention, and knowing he was going to fire at you," said Cuomo. "You could have run away."

"I think a lot of men would have done that," said Grant.

"But what does it say about you that you did it?" said Cuomo.

"It says my father raised me that way, he was in the Air Force and he was a great man," said Grant. "If I could be half the man that my dad was, then I would be a great man too, but I’m not."

"I got to disagree with you, pal," said Cuomo, visibly struggling to contain his emotions.

"I can’t believe anybody who loves you wouldn’t be proud," said Cuomo. "What you did, Chris, I’m telling you—"

"It’s what some men do," Cuomo corrected him. "You signify what we are at the best in the worst moment. And there’s so many people who owe you a—"

"I did what any good man would have done. That’s all. That’s it," said Grant. "I can’t take credit for anything. Because 21 people — 22 people died. If I would — if I could trade my life for that little girl’s life that I saw killed, I would do it in a second. I would do it in a second. Because she had her whole life ahead of her. She was there buying — she had school supplies. I’m 50 years old. My life is almost over. I would have traded my life for that life any day of the week. Any day of the week. And I should hope that in our society that people are here to protect each other, man."

"That’s what you were there for," said Cuomo.

"We’re all here to protect each other, save each other and to just be decent people, said Grant."

"It is so easy to fall in love with Christopher Grant, that he has such sweetness and love in his heart after what he lived through," said Cuomo after the segment, his face visibly tear-streaked. "But what you really need to connect to is what was forced on him here. Why should this man have to think to himself, I wish I had been killed so these kids didn't have to be? Why does this have to happen? Why do we have to demand from our fellow citizens, these moments of heroism. And in the face of all of them, one basic question, is there anything that we could do that would make this less likely? And we know the answer is yes."