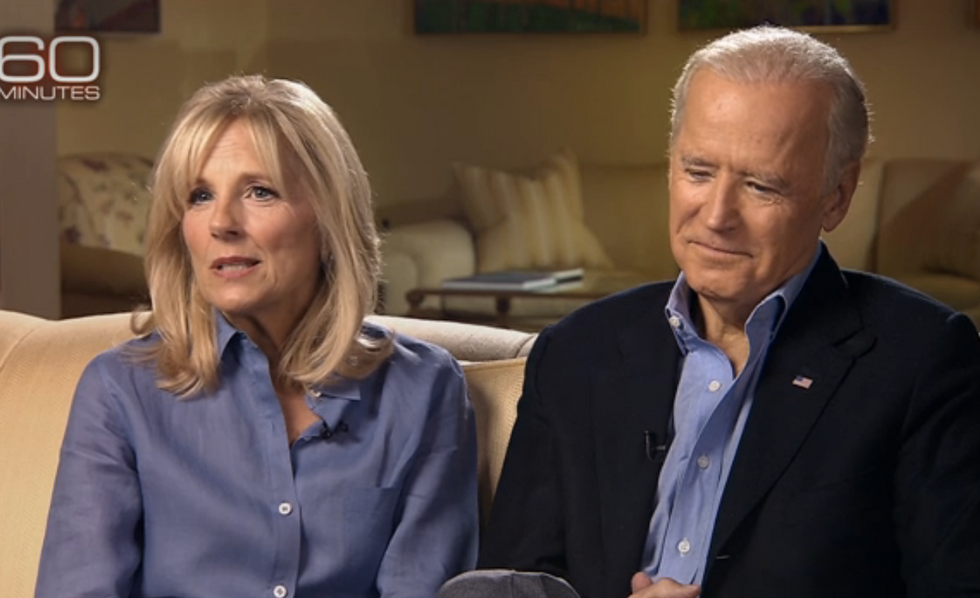 "Jill Biden may have settled for her husband, but I'm not sure why anyone else should."

Critics are responding harshly to comments made by Dr. Jill Biden Monday in which she claimed that even if Democratic primary voters prefer the policies of other 2020 candidates over those of her husband, former Vice President Joe Biden, they should vote for Biden anyway because he's more electable.

Dr. Biden made comments to that effect on Monday in a campaign appearance in Manchester, N.H., reported first by NBC News.

"Your candidate might be better on, I don't know, healthcare than Joe is," Dr. Biden said, "but you've got to look at who's going to win this election, and maybe you have to swallow a little bit and say, 'Okay, I personally like so and so better,' but your bottom line has to be that we have to beat Trump."

Since the start of Biden's campaign, his people have been pushing the line that he's the only one who can beat Trump, even though some polls have shown most of the frontrunners would take the President in a head-to-head. That line allows Biden to lean on a milquetoast platform that offers little-to-no progress, beyond getting a bonafide enemy out of the White House, even though much of Biden’s poll dominance reflects more on his name recognition than it does on his real-life performance. If you like him, I won't stop you from voting for him, but if you'd prefer a candidate who "might be better on healthcare than Joe is,"—and there are several of those to choose from, in varying degrees—now is absolutely not the time to swallow that at all.

Nevertheless, the former vice president has a commanding lead in national polls and in three early primary states Iowa, South Carolina, and Nevada. Sen. Bernie Sanders (I-Vt.) leads Biden in New Hampshire. But the first contest, in Iowa, is still months away. And with a field of 23 candidates, Biden's lead is far from a sure thing.

In her remarks, Dr. Biden acknowledged the depth of the field but nonetheless claimed her husband was best set to take on President Donald Trump.

"I know that not all of you are committed to my husband, and I respect that," said Dr. Biden, "but I want you to think about your candidate, his or her electability, and who’s going to win this race."

Dr. Biden's comments come in the midst of a difficult news cycle for the former vice president. After stumbling over his words at the end of a CNN debate on July 31, questions about Biden's mental fitness began to surface in media. Biden then mixed up the cities in which two mass shootings took place in early August, claimed he was in office during the Parkland shooting in 2017, and claimed that "poor kids are just  as bright and just as talented as white kids."

According to an August 15 report from The Hill, Biden's aides are trying to scale back the former vice president's appearances, claiming that Biden is being held to a high standard.

"Yes," tweeted The Intercept's Ryan Grim, "that higher standard of asking the candidate to speak in complete sentences."

As The Hill reported, Biden's gaffes are more likely later in the day:

Biden has a tendency to make the blunders late in the day, his allies say, particularly after a long swing on the road, like he had last week in Iowa.

A number of observers on social media pointed out that this is the definition of "sundowning," a symptom of dementia.

"If you need to do this, then maybe your guy just shouldn't be running," said Boston based activist Jonathan Cohn.

"A candidate who can’t keep up with the pace of a presidential campaign is not electable," Jentleson said.

Biden's also run into trouble with former President Barack Obama, whose record Biden is leaning on in the 2020 primary. August 16 reporting from The New York Times claims that the former president tried to dissuade Biden from running.

"You don't have to do this, Joe, you really don't," Obama reportedly said.

Yet Dr. Biden may have a point. A new CNN poll out Tuesday shows the former vice president is a riding double digit lead over his rivals. And national polling shows Biden with a strong lead over Trump as well.

"Jill Biden may have settled for her husband," tweeted Jones, "but I'm not sure why anyone else should."