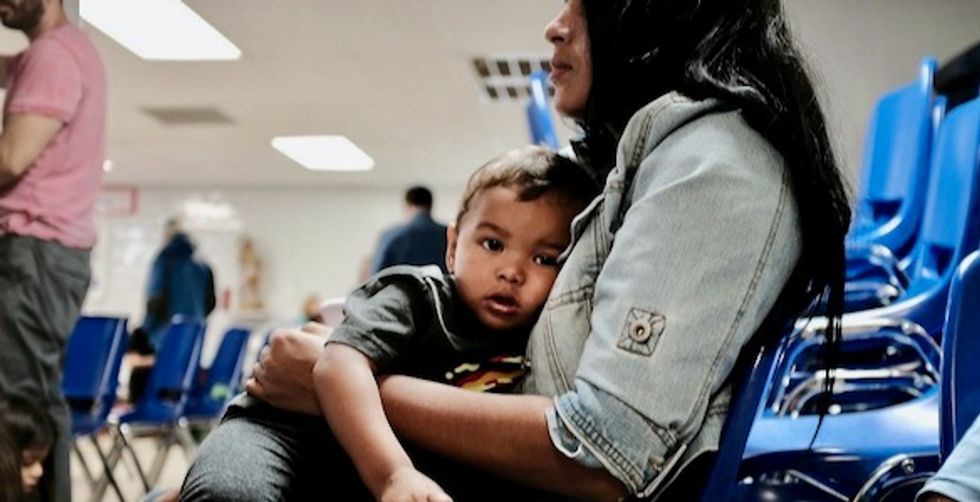 A woman sits with her son at the Catholic Charities Humanitarian Respite Center in McAllen, Texas, shortly after crossing the U.S.-Mexico border. (Photo: Spencer Platt/Getty Images)

"The Flores Settlement is crucially important for the humane treatment of immigrant children, and Trump is again trying to kill it."

President Donald Trump on Wednesday is reportedly planning to unveil a set of rules that would terminate an agreement limiting the amount of time the federal government can detain immigrant children and families, opening the door to indefinite detention.

The expected move, condemned by rights group RAICES as "cruel beyond imagination," would scrap the 20-day limit on detention of immigrant children established under the 1997 Flores Settlement Agreement (FSA).

"The Trump admin wants to indefinitely detain vulnerable families despite the irreparable trauma it will cause to children and babies."

"The Flores Settlement is crucially important for the humane treatment of immigrant children, and Trump is again trying to kill it," RAICES tweeted. "Please get the word out. We must #SaveFlores."

The Daily Beast reported Wednesday that the White House's plan to terminate the FSA "is President Donald Trump's most aggressive—and most legally suspect—attempt to circumvent legal protections for undocumented children since his disastrous 'zero tolerance' policy resulted in the separation of thousands of immigrant families."

"The FSA created stringent standards regarding the detention and release of undocumented children in U.S. government custody," according to The Daily Beast. "Most notably, the federal government is required to release children into the custody of licensed care programs within 20 days, as well as to place children in the least restrictive setting possible, with access to sanitary facilities, medical treatment, and contact with family members."

It’s appalling that the Trump Admin is trying to roll back the Flores agreement, which ensures independent oversigh… https://t.co/fpqhgndzwQ
— Hispanic Caucus (@Hispanic Caucus) 1566353014.0

The plan, reportedly a "top priority" of xenophobic Trump adviser Stephen Miller, is expected to come just days after a federal appeals court dismissed the Trump administration's argument that detained immigrant children are not necessarily entitled to soap, toothbrushes, and other basic hygiene items under the terms of the Flores Agreement.

Trump's rules are expected to face a flurry of legal challenges.