Dayton shooter was in band that promoted raping and killing women in songs: report 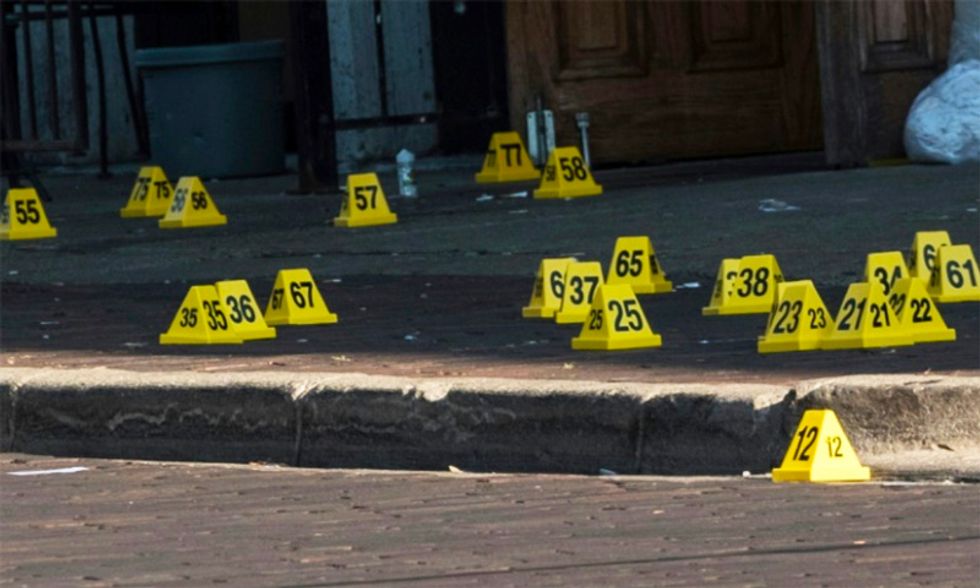 AFP / Megan JELINGER Police in Dayton, Ohio mark evidence at the scene of a mass shooting that left nine people dead and 27 wounded

More information is coming out about the misogyny of alleged Dayton massacre shooter Connor Betts, who was shot dead by police after 9 people were killed and 27 wounded early Sunday morning.

"Before he killed nine people in a mass shooting in Dayton, Ohio, early Sunday, Connor Betts was deeply involved in the misogynistic, male-dominated 'goregrind' or 'pornogrind' hardcore music scene. It has a regional following in the Midwest and is known for sexually violent, death-obsessed lyrics and dehumanizing imagery depicting women," Vice News reported Monday.

"Over the past year, the 24-year-old shooter occasionally performed live vocals in the band Menstrual Munchies, which released albums titled '6 Ways of Female Butchery' and 'Preeteen Daughter Pu$$y Slaughter,' with cover art showing the rape and massacre of female bodies. He also performed with a group called Putrid Liquid," Vice noted.

Jesse Creekbaum, who was in the band with Betts, is now taking down the group's music online.

“I feel sh*tty having let him be in the band, doing those lyrics,” Creekbaum said. “Because I know, like, whereas I saw it as a joke — like, ‘Let's play this and we’ll shock some people,’ and then the people that we know laugh — he didn't see it as a joke. He was like, ‘F*ck, yeah. We're gonna do this.’”