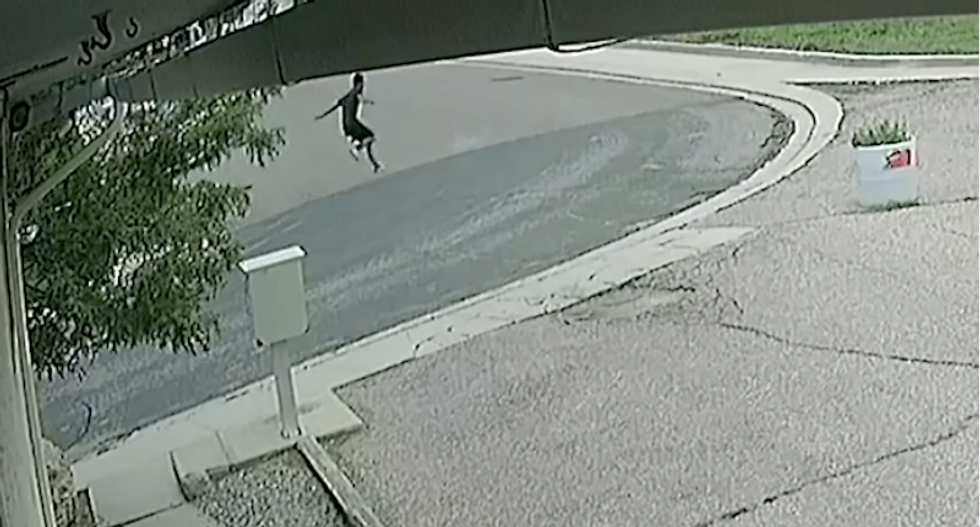 Surveillance footage in the police shooting death of a teenager has emerged, showing cops firing at the 19-year-old as he ran away from them, reports the Colorado Springs Gazette.

De’Von Bailey was allegedly fleeing the scene of a robbery. Two Colorado Springs Officers chased him. The footage shows him falling to the ground after getting shot. According to experts interviewed by the Gazette, the teen didn't appear to be wielding any type of weapon or threatening police.

“He appears to be shot in his back as he is running away, wearing gym shorts and a T-shirt,” John Burton, a 40-year lawyer and former board president of the National Police Accountability Project, told the Gazette. “And even if he is armed, that’s not enough to justify a shooting generally, unless the weapon is being used or threatened to be used, which I don’t see it (on the video). He is definitely not reaching in his waistband and about to shoot the officers.”

Last week, Senate Republicans filibustered the Freedom to Vote Act, refusing to allow it to reach the floor for debate, let alone an actual vote. Their goal was to prevent Black and brown people, as well as other Americans who support the Democratic Party, from participating in the polity as full citizens.

Moreover, the Republican filibuster of the Freedom to Vote Act — itself a compromise bill hatched by Sen. Joe Manchin of West Virginia, in the delusional belief it would attract bipartisan support — was effectively an endorsement of the ongoing coup against American democracy.

Warning: This article contains descriptions of individuals discussing self-harm and eating disorders and may be triggering for some readers. Raw Story has included only mild photos, as images of actual teens in crisis on TikTok cannot be published. Have tips about TikTok or internal documents about tech companies? Email techtips@rawstory.com.

ATLANTA — In August, Apple, the world's largest company by market capitalization, announced it would begin scanning uploaded photos for child pornography. The company also said it would warn teens who send nude photographs about the dangers of sharing sexually explicit images.