Donald Trump just gave 2020 Democrats a huge gift -- but will they use it? 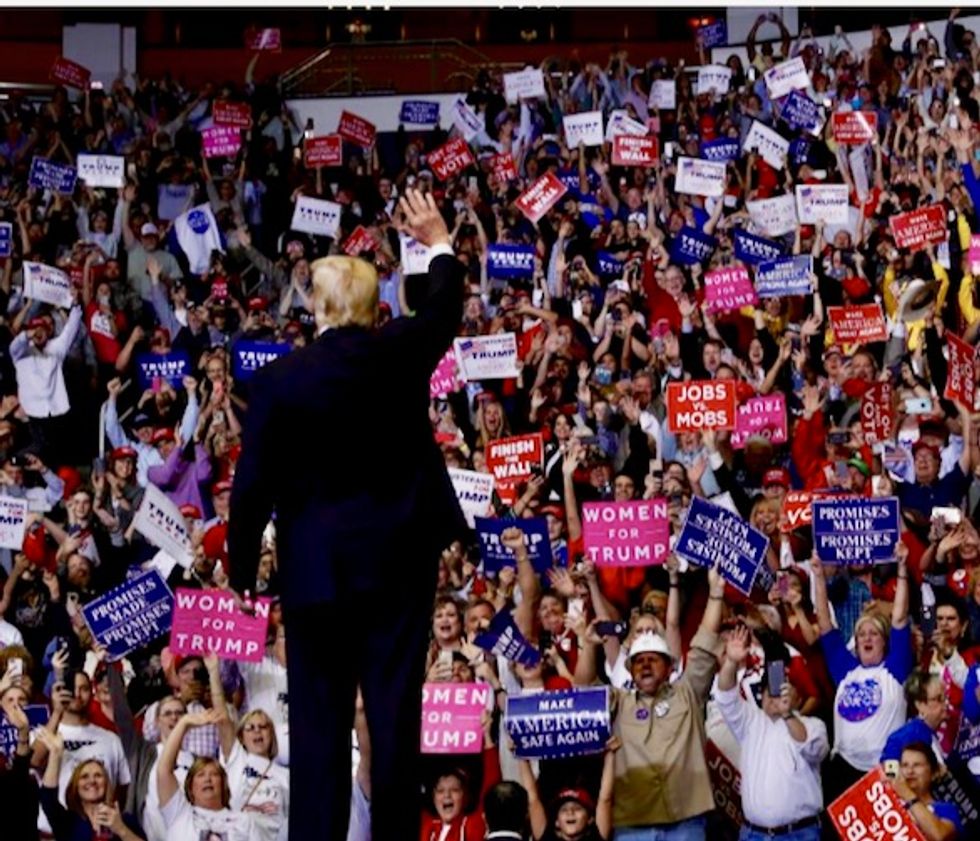 On Monday Donald Trump gave the Democrats a gift.

In response to a wave of terrorists attacks last week by white supremacists (and one by a young white man who by all indications is mentally deranged, his mind also warped by hostile sexism and extreme misogyny) Donald Trump said this from the White House: “In one voice, our nation must condemn racism, bigotry, and white supremacy. These sinister ideologies must be defeated.”

Trump's insincerity was obvious. He spoke like a hostage. Trump's body language betrayed his lack of interest and belief in his own words.

These comments by Trump were already shown to be flaccid and weak in their moral certitude by how earlier in the day he had de facto endorsed the white supremacist agenda of the El Paso terrorist (using the language of "immigration reform") when he said via Twitter that:

We cannot let those killed in El Paso, Texas, and Dayton, Ohio, die in vain. Likewise for those so seriously wounded. We can never forget them, and those many who came before them. Republicans and Democrats must come together and get strong background checks, perhaps marrying this legislation with desperately needed immigration reform. We must have something good, if not GREAT, come out of these two tragic events!

In this statement Donald Trump also showed himself, again, to be a self-styled mafia boss who is holding the American people hostage by linking efforts to stop mass murder by gun with his vanity project to build a wall — which is really a monument to racism and white supremacy — along the U.S.-Mexico border.

In the same series of tweets on Monday morning Donald Trump also continued to threaten reporters and journalists who do not cover him favorably, implicitly linking the dozens of murders committed by right-wing terrorists the week prior to his version of the Nazi's "Lugenpresse" — what he describes as"Fake News." Not coincidentally, the suspected El Paso mass murdering white supremacist right-wing terrorist also referenced "fake news" in the hateful rant he reportedly posted online:

The Media has a big responsibility to life and safety in our Country. Fake News has contributed greatly to the anger and rage that has built up over many years. News coverage has got to start being fair, balanced and unbiased, or these terrible problems will only get worse!

Trump's reluctance and discomfort at condemning racism and white supremacy are wholly understandable: What politician wants to risk alienating their most enthusiastic and loyal voters as well as other supporters?

Donald Trump claims to not have a "racist bone in his body" but this supposedly nonexistent racist bone was clearly causing him great pain and discomfort on Monday.

Trump's racist bone also holds great sway over him; for example, after he was forced to issue a halfhearted "condemnation" of white supremacist violence in the aftermath of the lethal Charlottesville hate riot in 2017, Trump made his infamous comments that white supremacists, Nazis and other racists are "very fine people."

Donald Trump is a racist and a white supremacist. He has repeatedly shown this to be true through his words, deeds, and policies. In a perfect world, by virtue of his own logic that "these sinister ideologies must be defeated," Donald Trump should either resign immediately or be voted out of office in 2020.

But in this world — the real world — Donald Trump's recent comments about white supremacist terrorism should be the basis of a series of campaign commercials by the Democrats which juxtapose his empty words with the racism, including acts of right-wing political violence and other hooliganism, that Trump has inspired if not commanded through stochastic terrorism.

In total, these political campaign ads and their related talking points would reinforce and amplify the public sentiment against Donald Trump and his regime.

The American people know that Donald Trump is a racist whose words, deeds and policies inspire and echo those of the white supremacists and other right-wing paramilitaries who are rampaging throughout the United States under his regime.

Public opinion polls show that it is only Republicans — predictably — who are largely in denial of these facts. The American people are also frustrated by Donald Trump and the Republican Party's refusal to do anything substantive to stop mass shootings and other gun violence in America.

Donald Trump and the Republican Party are on the defensive in this moment. The Democrats should take advantage of this opportunity by pressing forward.

Clear messaging about how Donald Trump is an existential threat to the United States and its citizens and also a president whose policies have only helped the very rich while hurting regular Americans would be a start. This message should be coupled with direct, forward-looking proposals about health care, education, opportunities for their children and future generations, fixing America's infrastructure, and reducing economic and other forms of of social inequality. Most importantly, the Democrats must present an obvious contrast between themselves and how they want to improve America, and the option of Donald Trump and a Republican Party which is ruining America.

But instead of doing the smart and obvious thing the Democrats often choose to do the opposite. In recent years and decades the Democrats have repeatedly shown that they are plagued by self-sabotage, a gift for self-inflicted political harm, well-practiced skill at snatching defeat from the jaws of victory, and ultimately squandering every advantage given to them by Republicans.

Democrats are giving swing voters, sickened by Trump and begging for reasons to trust them, pause. Progressives explain they’re just avoiding the disaster of another Dukakis and Mondale, who lacked bold ideas. But who needs bold ideas when there’s a country hungry to be rid of the most dangerous president ever? It’s true that candidates should use their airtime to tell voters what new things they will do for them, but not to the exclusion of what Trump has done to them. Trump gloated Thursday that “Democrats spent more time attacking Obama than they did attacking me.”

Beyond self-inflicted wounds, the Democrats face other challenges as well in defeating Donald Trump and his Republican Party in the 2020 presidential election.

The Republican Party is the country's largest white identity organization. Donald Trump, the Republican Party's leader, is wrapped in a protective blanket of white racism and white supremacy. Donald Trump's weaponized white identity politics means that his voters will stay loyal to him no matter what. This is the basis of Trump's cult-like power. For all the starry eyed hopeful talk of Trump's racism and other foul behavior not playing well in the "suburbs" and with white "soccer moms," the reality is that white supremacy and racism are akin to political gravity wells that — as they did in 2016 with the much-discussed "Obama to Trump voters" — may suck in more white voters in 2020. Ultimately, one of the lessons of 2016 and 2020 will likely be that Donald Trump and his Republican Party's white supremacist coalition is much more enduring than many political observers would like to admit.

In one of their newest sojourns out into the hinterlands of Trumplandia, CNN profiled voters in Michigan. One of them shared the following thoughts about Donald Trump and his most recent fusillade of racist attacks against nonwhite people:

Gaither, who inspects goods like steel and aluminum before they are shipped overseas, is working seven days a week and can barely keep up with the demand for his services. That economic confidence has altered his opinion of Trump, leading him to brush off some of the controversies over Trump's race-baiting and anti-immigrant statements.

"These companies are willing to pay double, triple," the 30-year-old said during a recent interview outside a Home Depot in his hometown of Warren. "We can't hire enough people ... (Trump) just cut the red tape. It doesn't exist anymore."

Like many other voters here in Macomb County, which is 81% white — Gaither, an independent, shrugged off the recent controversy over Trump's suggestion that four minority congresswomen should "go back and help fix the totally broken and crime infested places from which they came."

Gaither underscored that he doesn't agree with everything Trump says. But "I'll take progress over a few shitty words that are said here and there," Gaither said. "The guy says stupid things, but as long as things are going good, I could give two shits."

"Until he says a literal N-word or something like that. Then yeah, I might be pissed, but that is beyond irrelevant to me," said Gaither, who is white, referring to the uproar over the President's comments about the congresswomen.

Here, narrow economic self-interest if not greed are more important than civic virtue and a belief in American democracy as something to be nurtured and protected. This sentiment is especially pronounced in a country where faith in the government as a force for good which can actually improve the lives of the average citizens has been decreasing for decades. Unfortunately, Gaither's voice is but one in a much larger chorus of agreement.

This crisis of faith was growing long before the rise of Trump and his American fascism. In many ways Trump is just an opportunist picking at the bones of weak and sick American polity. In a recent article in the journal Contemporary Sociology, Yale University sociologist Jeffrey Alexander warns that, "The making and unmaking of civil solidarity, its upgrading and downgrading, depend on specifying its idealistic discourse in relation to ongoing events and struggles in particular times and places. This is the work of civil institutions. . . . What is dangerous about Trumpism is not that it speaks the polarizing and binary language of civil backlash, but that it often seems hell-bent on destroying the autonomy of civil-sphere institutions along the way."

Will the Democrats and their allies squander this opportunity or will they instead use it to march on to victory over Donald Trump?