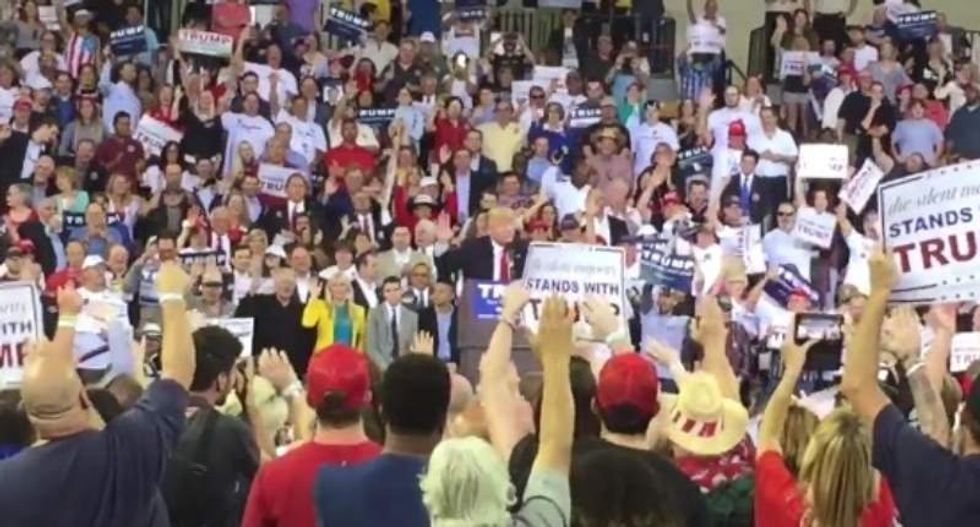 Patrick Crusius may have pulled the trigger and massacred 22 people in El Paso on Aug. 3, but the voices in his head that convinced him to carry out a racist rampage were Donald Trump and right-wing media.

The evidence is all there in Crusius’s manifesto, which is a distillation of Trump’s words and ideas, starting with, “This attack is a response to the Hispanic invasion of Texas.”

Crusius echoes Trump’s rants from last year calling Central American asylum-seekers headed to the U.S. border an “invasion.” Trump has kept up the racist drumbeat for months, particularly on Twitter. And his re-election campaign has paid for more than 2,000 Facebook ads that scream “immigrant invasion.”

In June, Trump called migrants “this onslaught, this invasion” during a high-profile FOX News interview in France on the 75th anniversary of the D-Day invasion of Nazi-occupied Europe. He also spoke sinisterly of what Mexico was doing to the United States, “They send in $500 billion worth of drugs, they kill 100,000 people, they ruin a million families every year if you look at that, that’s really an invasion without the guns.”

Crusius, who enlisted as a stormtrooper in the war on immigrants by early July, is no different than Trump apart from lacking his lurid imagination. He boiled downed Trump’s fascistic rhetoric to “all the problems these invaders cause and will cause” which justified his murder spree as “faultless.”

Crusius says his “motives for this attack” was “The Great Replacement,” a white nationalist conspiracy theory that shadowy elites (namely Jews) were replacing whites in Europe with people from the Global South, especially Muslims. The American version of the conspiracy is “white genocide,” with white nationalists pushing ethnic cleansing as the solution.

Trump began subtly promoting white genocide in early 2016 when his candidacy was still a pipe dream. He retweeted Nazi sympathizers fond of the term “white genocide,” along with scores of others who followed white genocide influencers. None of this was lost on racists like the editor of the Neo-Nazi site, The Daily Stormer, who said Trump is “giving us the old wink-wink.” One research group concluded that Trump is one of the top 10 influencers in the world among great replacement conspiracists.

Last year Trump upped the volume on white genocide. Tucker Carlson, one of Trump’s favorite FOX News hosts, “dedicates significant portions of his popular primetime show to segments that work as ‘great replacement’ propaganda,” according to GQ. Carlson’s insights include a “flood” of East African migrants is “going to overwhelm our country, and change it completely and forever.”

In August 2018, Carlson broadcast an error-laden white genocide conspiracy that the South African president was “seizing land from his own citizens because they are the wrong skin color.” A few months earlier Carlson interviewed a far-right South African extremist who claimed white farmers were being killed off in “barbaric and horrifying murders.”

That went straight to Trump’s brain, who tweeted, “I have asked Secretary of State @SecPompeo to closely study the South Africa land and farm seizures and expropriations and the large scale killing of farmers. ‘South African Government is now seizing land from white farmers,’” crediting Carlson and FOX News. Disturbingly, prior to Trump and Carlson’s fear-mongering, Stormfront circulated “a petition calling on Trump to give immigration priority to white South African farmers fleeing “violent confiscation of their lands.’” And in June Carlson continued spreading the Black-South-Africa-is-killing-white-farmers lie.

Crusius’s manifesto is a study in great replacement paranoia. He says, “I support the Christchurch shooter and his manifesto.” He’s referring to Brenton Tarrant, the New Zealand mass murderer who killed 51 people at two mosques in March 2019 and titled his manifesto “The Great Replacement.”

Crusius, like Tarrant, is obsessed with demographics: baby boomers are dying off, both legal and illegal immigrants are “flood[ing] into the United States,” and these “Invaders … also have close to the highest birthrate of all ethnicities in America.”

In short, whites are being replaced by immigrants, particularly Hispanics. If nothing is done Hispanics will take control of Texas and turn it “into an instrument of a political coup which will hasten the destruction of our country.”

Crusius believes, “America will soon become a one party-state” controlled by the Democratic Party. The Democrats will do this through “open borders, free healthcare for illegals, citizenship and more to enact a political coup by importing and then legalizing millions of new voters. With policies like these, the Hispanic support for Democrats will likely become nearly unanimous in the future.”

There is little light between Trump and Crusius. They both support ethnic cleansing. Trump uses the levers of power, whether it’s the Muslim ban, barring all refugees, illegal asylum policies, attacking the entire legal immigration system, or imprisoning immigrants in concentration camps.

Lacking legal powers, Crusius wrote that “myself and many other patriotic Americans will provide … the right incentive” to make Hispanics return to their home countries. That incentive was a massacre.