His name is Stephen Ross. He's reportedly worth over $7 billion.

He owns the Miami Dolphins. Hard Rock Stadium. A multi-billion dollar real estate development firm called The Related Companies. Equinox Fitness health clubs, along with SoulCycle, PURE Yoga, Blink Fitness, and The Yorkville Club. He lives in Manhattan's Time Warner Center, which his company developed. His real estate company is one of two developers in charge of the redevelopment of 28 acres in and around Manhattan's Chelsea neighborhood, known as the Hudson Yards project. And he owns RSE Ventures, a sports, entertainment, media, and marketing firm.

In 2008 Jared Kushner's NYC-based newspaper The Observer published a list of "The 100 Most Powerful People in New York Real Estate." It named Ross number three.

Kushner would go on to become Senior Advisor to the President and Donald Trump's son-in-law.

Ross this weekend is holding what will be a multi-million dollar fundraiser for President Donald Trump.

And many are furious the billionaire is supporting a president more and more Americans are saying is racist, a white nationalist, and a white supremacist.

Entry to the uber-exclusive fundraiser in The Hamptons starts at $5,600. Tickets go up to $250,000. Those willing and able to pony up a quarter million dollars to donate to the re-election of modern America's most racist president will be able to memorialize their support of white supremacy with "a photo and a private roundtable with the president," The Washington Post reports.

The LGBTQ community is calling for a boycott of Ross' elite business, especially Equinox Fitness and Soul Cycle, which are popular among some gay people.

"Heads up, gym bunnies. Yet another brand we consume in our vast, daily practice of capitalism has been implicated into the problematic views of billionaires," OUT Magazine's Fran Tirado reported Wednesday afternoon. "Time to think about ethical consumption, fitness gays!"

The Advocate's Daniel Reynolds reports that news outlet's Facebook page in under an hour "had filled with dozens of calls for a boycott of the elite exercise brands" after their report was posted.

The social media pages of Equinox and SoulCycle are also bearing the backlash.

"My membership and my husband’s are DONE here in Chicago if this fundraiser goes on. No way I’m paying all that money towards that monster or anyone who supports him," one Facebook user wrote on Equinox's page.

"You’re about to lose another member 😡 shame!" wrote another.

"Dear Equinox," yet another user writes, "The fundraiser on Friday in the Hamptons for Trump must be canceled. Trump is a racist who spreads hate. Support for him is unacceptable. If the fundraiser proceeds, I will cancel my membership."

There are many more: 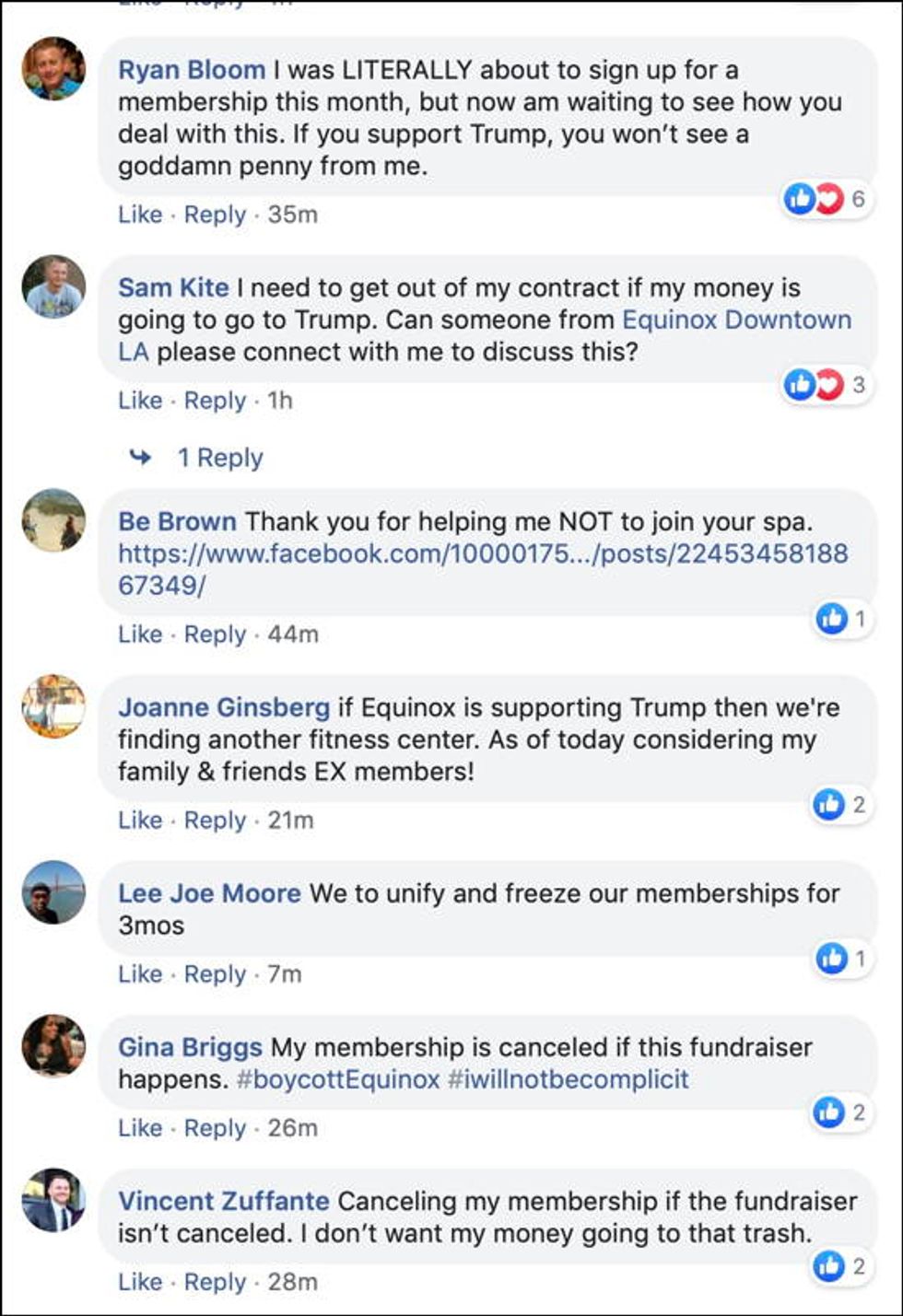 @shannoncoulter This is very concerning @soulcycle I take at least 4 classes a week. I’ll go to @BarrysBootcamp until you address this
— Mark (@Mark)1565191710.0

@wallerABC7 @Equinox @soulcycle To the #lgbtq community and allies: see above. How many of you will have the courag… https://t.co/uruGZ2wDT4
— jimmy williams (@jimmy williams)1565175714.0

The note I just sent @soulcycle after reading its parent company’s CEO is hosting a fundraiser for @realDonaldTrump: https://t.co/LKEcRqS8HD
— JackiSchechner (@JackiSchechner)1565197149.0

Hmmm. The @Equinox and @soulcycle owner is hosting a Trump fundraiser. Seems like a bad move given how much of thei… https://t.co/RoBHOwLN4Q
— Christian Azer (@Christian Azer)1565146017.0