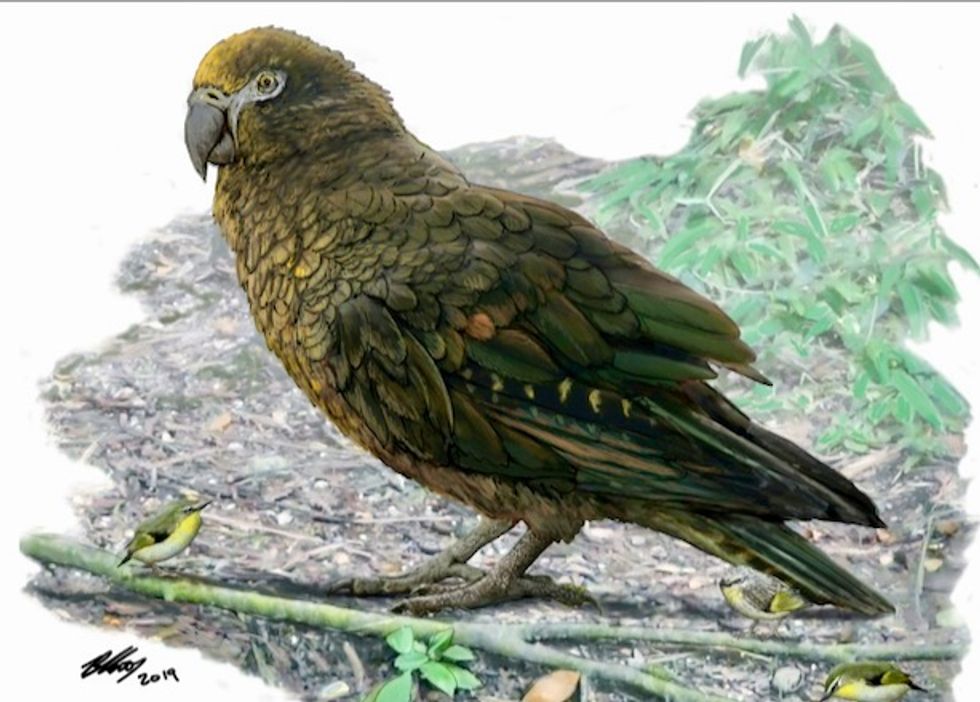 The bird would have stood about 1.0 metre (39 inches) tall and weighed up to 7.0 kilograms (15.5 pounds) FLINDERS UNIVERSITY/AFP / Brian Choo

The remains of a super-sized parrot that stood more than half the height of an average human and roamed the earth 19 million years ago have been discovered in New Zealand.

Judging by the size of the leg bones, the bird would have stood about one metre (39 inches) tall and weighed up to seven kilograms (15.5 pounds), according to a report by an international team of palaeontologists published in the latest edition of Biology Letters.

"It could have flown but we're putting our money on it being flightless," Paul Scofield, the senior curator of natural history at Canterbury Museum, told AFP Wednesday.

When the bones were found in 2008 no one was certain what they were, and they spent 11 years gathering dust on a shelf until the team looked at them again earlier this year.

"The thought they were from a giant parrot did not enter our minds. We thought it could be some type of eagle until we went back and looked at it again," Scofield said.

The parrot has been named Heracles inexpectatus to reflect its Herculean size and strength -- and the unexpected nature of the discovery.

"Heracles, as the largest parrot ever, no doubt with a massive parrot beak that could crack wide open anything it fancied, may well have dined on more than conventional parrot foods, perhaps even other parrots," Mike Archer, from the University of NSW Palaeontology research centre, said.

The bird was approximately the size of the giant "dodo" pigeon and twice the size of the critically endangered flightless New Zealand kakapo, previously the largest known parrot.

Evidence of the parrot was unearthed in fossils near St Bathans in southern New Zealand, an area that has proved a rich source of fossils from the Miocene period which extends from about five million to 23 million years ago.

New Zealand, home to the now-extinct flightless bird moa which was up to 3.6 metres tall with neck outstretched, is well known for its giant birds.

"But until now, no-one has ever found an extinct giant parrot –- anywhere," associate professor Trevor Worthy from Flinders University said.

"We have been excavating these fossil deposits for 20 years, and each year reveals new birds and other animals... no doubt there are many more unexpected species yet to be discovered in this most interesting deposit."

Last year, scientists found the remains of a giant burrowing bat that lived millions of years ago in the same region.

From the teeth and bones of the animal, which lived 16 to 19 million years ago, it is estimated to be three times the size of an average modern bat and weighed 40 grammes (1.4 ounces).