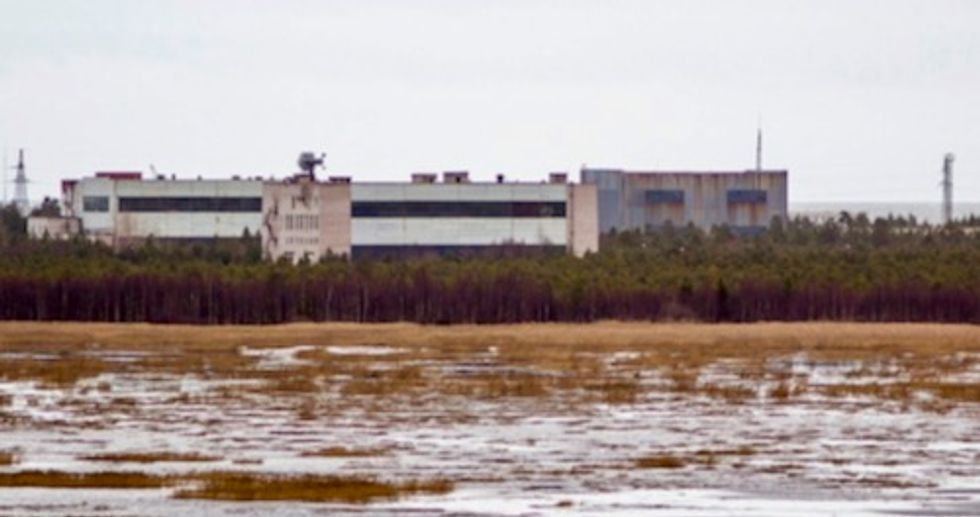 The military base and testing centre, pictured here in 2011, was used by the Soviet Union to test its nuclear arsenal AFP

Russia said Saturday an explosion at an Arctic missile testing site killed five nuclear agency staff and involved radioactive isotopes after a nearby city reported a spike in radiation levels.

In a statement, Russia's nuclear agency Rosatom said the accident on Thursday at a secret military facility also left three staff with burns and other injuries.

The military had not previously described the accident as involving nuclear fuel and said radiation levels were normal afterwards.

But officials in the nearby city of Severodvinsk reported that radiation levels were briefly raised after the accident.

The accident occurred in the far northern Arkhangelsk region during testing of a liquid propellant jet engine. An explosion sparked a fire, killing two, the defense ministry said in a brief statement.

Rosatom said its staff were providing engineering and technical support for the "isotope power source" of the engine being tested.

The authorities have released few details of the accident at the Nyonoksa test site on the White Sea, used for testing missiles deployed in nuclear submarines and ships since the Soviet era.

It was not immediately clear whether the death toll reported by Rosatom included the fatalities announced earlier by the defense ministry.

The authorities in Severodvinsk, 30 kilometers (19 miles) from the test site, said on their website on Thursday that automatic radiation detection sensors in the city "recorded a brief rise in radiation levels" around noon that day.

The post was later taken down and the defense ministry said that radiation levels were normal after the accident.

An official responsible for civil defense, Valentin Magomedov, told TASS state news agency on Thursday that radiation levels rose to 2.0 microsieverts per hour for half an hour from 11:50 am (0850 GMT), before falling sharply.

He said this exceeded the permitted limit of 0.6 microsieverts, TASS reported.

Greenpeace Russia published a letter from officials at a Moscow nuclear research centre giving the same figure, but saying higher radiation levels lasted for an hour. The officials said this did not present any significant risk to public health.

Russian online media published unattributed video that journalists said showed a line of ambulances speeding through Moscow to take the injured to a centre that specializes in the treatment of radiation victims.

Rosatom said that the injured were being treated at a "specialized medical centre".

An expert from Moscow's Institute for Nuclear Research, Boris Zhuikov, told RBK independent news site that isotope power sources are mainly used in spacecraft and are not usually dangerous for people working with them.

"If they are damaged, people who are nearby could be hurt. Isotope sources use various types of fuel: plutonium, promethium or cerium," Zhuikov said.

The radioactivity levels involved are "absolutely not comparable with those during serious accidents at reactors," he added.

The news of the accident prompted residents of Severodvinsk to rush to pharmacies on Thursday to stock up on iodine, which can be taken to stop the thyroid gland absorbing radiation.

"People started to panic. Within a matter of an hour all the iodine and iodine-containing drugs were sold out," pharmacist Yelena Varinskaya told AFP.

The Soviet Union saw the world's worst nuclear accident at Chernobyl in 1986, when the authorities sought to cover up the seriousness of the disaster.