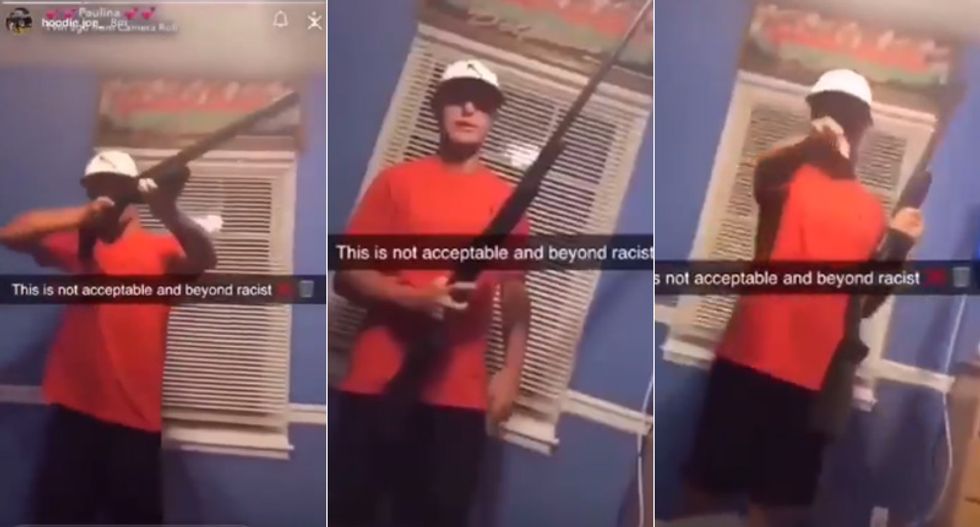 Residents in Bay County, Florida are concerned and upset after a local Mosley High School student was filmed making racist threats. But school and law enforcement officials have refused to take action.

The teen was recently filmed threatening to shoot home intruders while wielding a firearm. "Boom! N**ger dead," the teen says in the viral video. "F*cking KKK this sh*t, bro."

Officials at Bay District Schools said the teen will not face punishment because he did not threaten students or school personnel.

The school officials referred the video to the Bay County Sheriff’s Office, which also declined to punish the teen, saying that "in spite of the deeply offensive comments made by the teenager, no crime has been committed."

"It was despicable, disgusting, and deeply offensive," Bay County NAACP President Dr. Rufus Wood told WJHG. "As a person of color, I feel frightened and threatened."

"Across the country and across the state, they are arresting kids for things that are far, far less significant than this," added local citizen Tony Bostick.

"He did a comparison to shooting ducks and saying I’m killing a N either way," local resident and civil rights advocate Greg Dossie told WMBB.

It is not the first racist incident connected to the school.

Earlier this year, a student posted an image of herself with the caption: "I'm a n**ger now lmao."

In 2018, an African American student found a doll hanging from a noose near a drama classroom. According to her mother, the students joked about the noose and put it around her daughter's neck.

“That’s not something that is a joke to me. At all. It really hurts me to think about my daughter in that situation,” the student's mother said.