Fox's Lou Dobbs: Man who plowed truck into ICE protesters is the real victim -- and 'well within his rights' 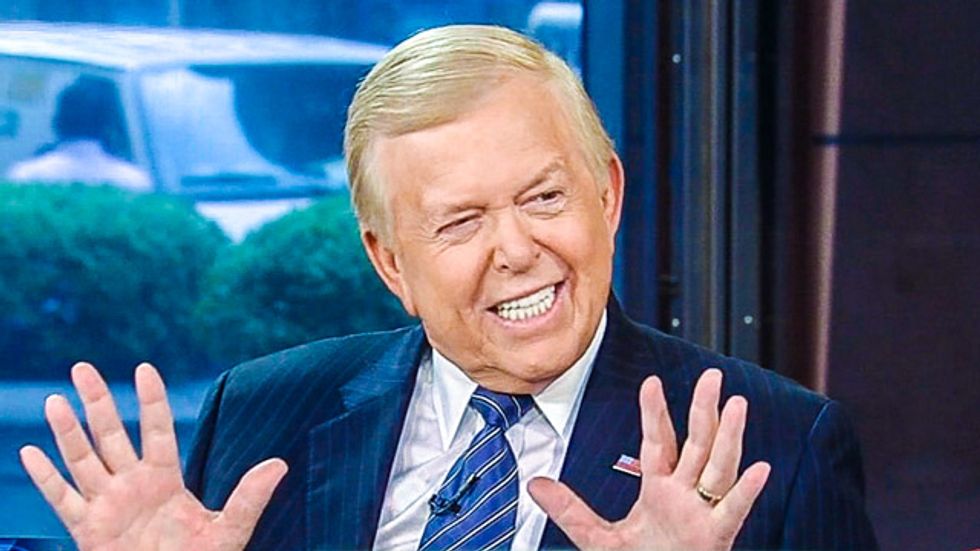 Fox Business host Lou Dobbs praised a corrections officer who intentionally plowed his truck into a crowd of protesters outside a Rhode Island ICE facility, saying the attack was justified.

A correctional officer at the Donald W. Wyatt Detention Facility in Central Falls, Rhode Island, intentionally drove his pickup truck into protesters demonstrating against the detention of migrants by ICE on Wednesday, the Providence Journal reported. Capt. Thomas Woodworth was placed on administrative leave after protest organizers said a 64-year-old protester suffered internal bleeding and a broken leg in the attack and another protester was injured as well. Fellow corrections officers sprayed protesters with pepper spray, sending three other people to the hospital.

The protesters were part of the “Never Again” movement, a Jewish protest group that likens ICE detention facilities to the treatment of Jews during the Holocaust. The protesters had been organizing outside the Rhode Island facility since early July.

Video of the protests shows the black pickup truck accelerate toward protesters and stop suddenly just before hitting anyone. After demonstrators began to bang on the hood of his truck, the vehicle pushed forward again.

Dobbs played an edited clip that cut out the part where Woodworth drove at the protesters and praised his actions.

“Protesters in Rhode Island harassing a federal detention worker last night,” said Dobbs, an ally and adviser of President Trump. “These demonstrators blocking an entrance to a facility holding illegal immigrants when the driver tried to pull into the parking lot, the protesters surrounded him, yelling, banging on the hood of the truck, blocking his entrance.”

Dobbs claimed the protesters “committed assault” by banging on the truck after Woodworth drove toward them.

Speaking to former acting ICE director Tom Homan, Dobbs said, “I know that it must just gladden your heart to see a bunch of demonstrators at an Immigration Customs Enforcement facility blocking the path of a guard and then complaining about the fact that he sought to do what is within his rights, which is to proceed to park his vehicle and go to work.”

Homan also attacked the protesters, wondering whether any of them “even got a job.”

Homan previously worked in the Trump administration and Dobbs has frequently consulted with the president. The Daily Beast reported last year that Dobbs has been “involved with some of the administration’s more sensitive discussions.” Trump has even put Dobbs on speakerphone during multiple Oval Office meetings so the Fox host could weigh in, according to the report, which added that Trump will occasionally “cut off an official so the Fox Business host can jump in.”

Dobbs is in some ways the godfather of what is now called Trumpism.

“He was Trump before Trump,” former White House chief strategist Steve Bannon told the Washington Post. “He has always sort of epitomized the intellectual foundation of the Trump movement on trade and immigration, even if he doesn’t get enough attention. He was more Breitbart than Breitbart, going back years.”

“Lou Dobbs just justified and promoted the car ramming that that caused one of our peaceful protesters to have serious injuries,” the group said. “This was an attack that could have (and has, as in Charlottesville) killed someone. Fox News is inciting violence.”