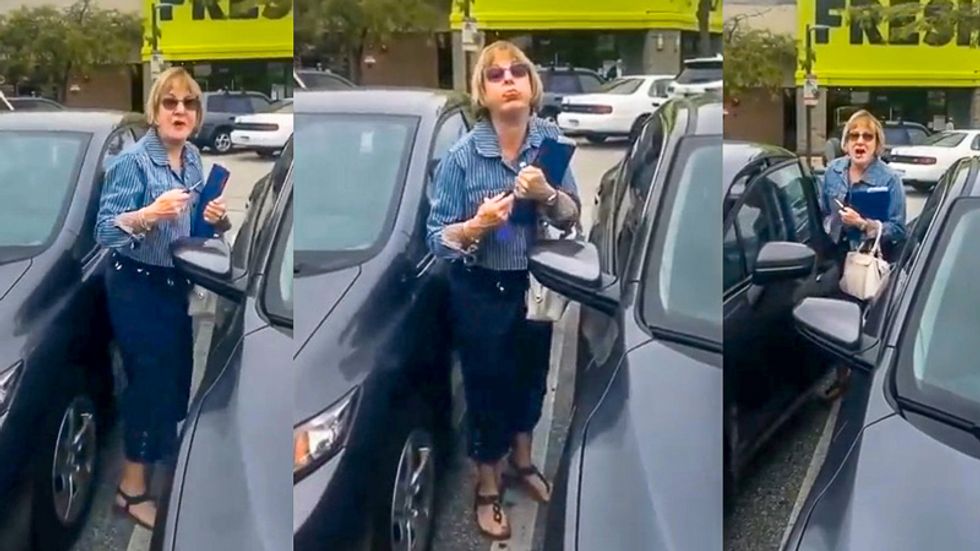 A racist white woman who was identified as Carla Waldman unleashed a rant on a Asian woman over parking conditions at a Canadian shopping center.

In a video that went viral over the weekend, Waldman can be seen complaining about Xu's parking even though Waldman's car has crossed over the line.

"We don't want you here because you can't drive," Waldman says in the video, sticking her tongue out at Xu.

"You crossed the line," Xu points out as the camera pans down to show the two cars touching.

"You don't know a damn thing!" Waldman shouts. "Go back to China where you belong. You f*cking asshole."

"F*ck you, f*cking c*nt," the white woman adds before leaving.

According to CBC, Richmond police are investigating the incident.

"In order to ensure the integrity of the investigation and privacy of the individuals involved, we are asking the public to respect the investigative process and refrain from posting any comments on social media" Inspector Sunny Parmar said in a statement.

Xu explained to CBC that she recorded the conversation because Waldman hit her car. She said that she waited in the parking lot for the driver to return when Waldman showed up.

"She just denied and asked where I'm from," Xu said. "I said, 'This is not the point, the thing is that we've got an accident here.'"

Waldman told CNBC that she did not regret using racist language.

"I do not regret anything I said to her because she was a very mean person," Waldman said. "I don't care what they're calling me. I am not a racist person."

Incident happened in Richmond BC Canada. The person holding the camera said she was parked in the spot first and was going to go shopping but noticed the lady pull in and hit her car. Sad that in 2019, this type of racism still occurs.