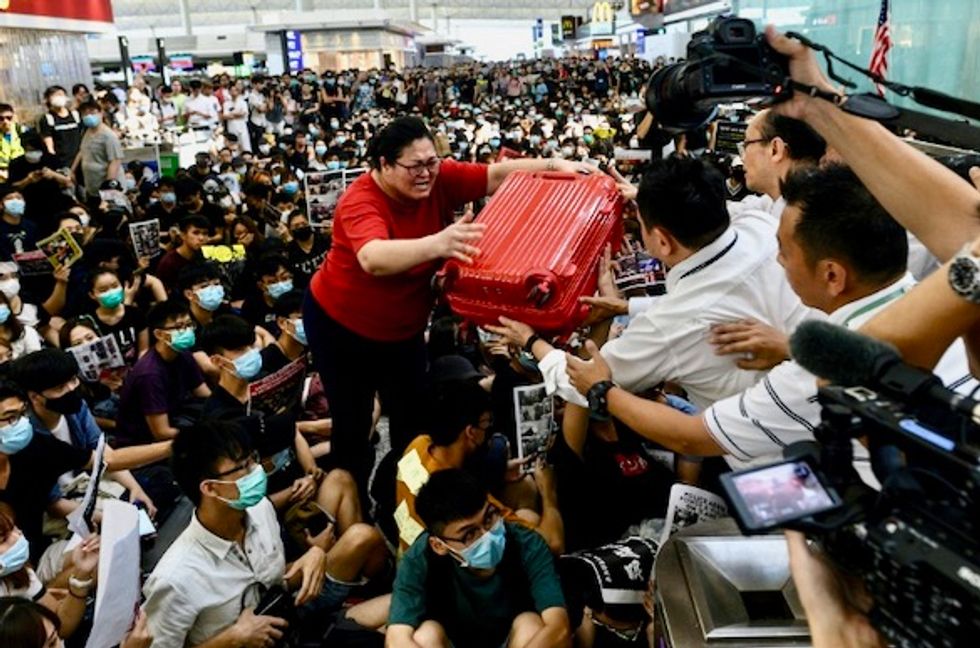 Hong Kong's airport cancelled all remaining departing flights for the second day as protesters staged new rallies on Tuesday, hours after the territory’s embattled leader warned them against heading down “a path of no return”.

The airport authority announced that check-in services for departing flights were suspended but that it did not expect arriving flights to be affected.

Some flights were able to depart and land earlier on Tuesday, a day after more than 200 flights were cancelled.

The airport's arrival and departure halls were blocked by thousands of protesters who were gathered in the hub for the fifth consecutive day to press their calls for democratic reforms and an independent inquiry into alleged police brutality.

The new gathering came as Beijing sent more ominous signals that the 10 weeks of unrest must end, with state-run media showing videos of security forces gathering across the border.

The crisis, which has seen millions of people take to Hong Kong's streets, has become the biggest challenge to Chinese rule of the semi-autonomous city since its 1997 handover from Britain.

Hong Kong's pro-Beijing leader, Carrie Lam, gave an at-times emotional press conference on Tuesday morning in which she warned of dangerous consequences if escalating violence was not curbed.

"Violence, no matter if it's using violence or condoning violence, will push Hong Kong down a path of no return, will plunge Hong Kong society into a very worrying and dangerous situation," Lam said.

"The situation in Hong Kong in the past week has made me very worried that we have reached this dangerous situation."

Lam, who faced fierce questioning from local reporters and at one point appeared to be on the verge of tears, appealed for calm.

"Take a minute to think, look at our city, our home, do you all really want to see it pushed into an abyss," Lam said, although she again refused to make any concessions to the protesters.

On Monday thousands of protesters filled Hong Kong's airport to denounce what they said were violent tactics by police in trying to quell weekend rallies.

They chanted: "stand with Hong Kong, stand for freedom," as passengers scrambling to catch rescheduled and delayed flights wheeled their luggage through the airport.

Protesters had also put up posters and daubed graffiti that included the term "an eye for an eye".

This was in reference to a serious facial injury that reportedly caused a woman to lose the vision in one eye at a demonstration that turned violent on Sunday night.

The demonstrators accused police of causing the injury by firing a bean-bag round.

The disruptions caused headaches for travellers, but many said they sympathised with the protesters.

"The protesters are the loveliest people in the world," said Pete Knox, a 65-year-old Brit on his way to Vietnam.

"I understand the basics of the protest and they've got a point: it's about freedom and democracy and it's incredibly important."

The protests began in opposition to a bill that would have allowed extraditions to the mainland, but quickly evolved into a broader bid to reverse a slide of rights and freedoms in the southern Chinese city.

Authorities in Beijing on Monday slammed violent protesters who threw petrol bombs at police officers, linking them to "terrorism".

On Tuesday state media upped the ante, calling protesters "mobsters", warning they must never be appeased and raising the spectre of mainland security forces intervening to quash them.

The official state news agency Xinhua warned in a commentary Tuesday that "violent radicals" were pushing Hong Kong into an "abyss".

In a video posted on its Weibo channel, a CCTV anchor warned viewers: "When dealing with terrorism, there is no soft hand."

The stern words came as videos were promoted by state media of Chinese military and armoured vehicles appearing to gather in the southern city of Shenzhen, which borders Hong Kong.

A senior US administration official on Monday urged "all sides" to avoid violence.

"Societies are best served when diverse political views are respected and can be freely and peacefully expressed," the official said on condition of anonymity.