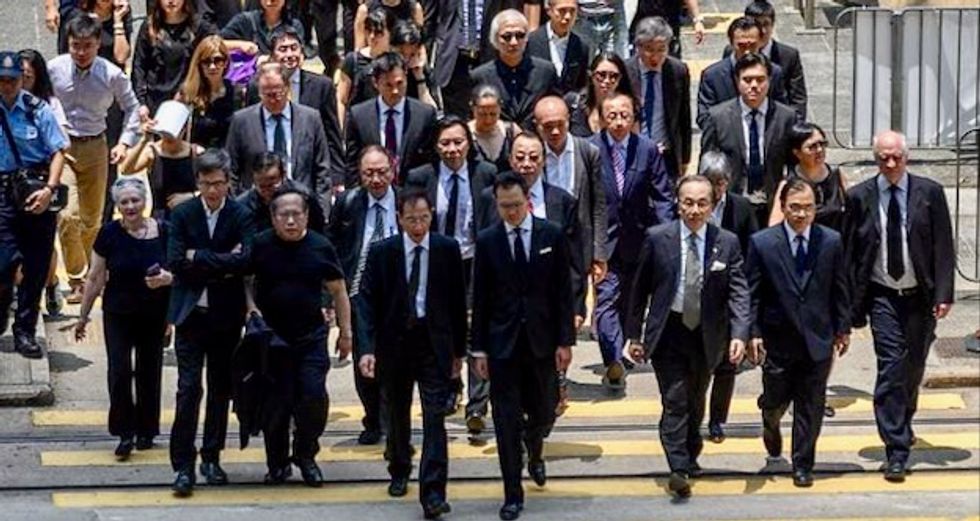 Hundreds of lawyers dressed in black marched under the scorching sun from the city's highest court to the justice secretary's office.

The rally came as daily demonstrations have become increasingly violent and China ramped up its warnings to protesters, saying on Tuesday that "those who play with fire will perish by it".

They are backing the protest movement's demand for an independent inquiry into law enforcement tactics but they also said they were marching against politically motivated prosecutions from the city's Department of Justice.

"They carry out prosecutions selectively... How would people still have confidence in the government?" she added, referring to the perceived different treatment given by police to protesters and their opponents, pro-government thugs with suspected triad links.

Hong Kong police have arrested more than 500 protesters and charged dozens with rioting -- which carries a maximum 10 years in jail.

But they have so far only arrested 19 men for last month's attacks on democracy protesters that hospitalised 45 people -- and only on the less serious charge of unlawful assembly.

Protesters accuse the police of using excessive violence against their movement and turning a blind eye to triad gangs -- accusations the force strongly denies.

They have also vowed to keep the movement going until their core demands are met, such as an independent inquiry into police tactics, a permanent withdrawal of the bill, amnesty for those arrested, and universal suffrage.

"Law enforcement is an important element in law. If law enforcement is done poorly, how can we tell others that Hong Kong has rule of law?" said 22-year-old law student Michelle Wong, who joined the march.

Tuesday march was a peaceful and now rare sight as Hong Kong buckles under increasingly violent clashes between protesters and police.

On Monday the city witnessed a rare general strike and the most widespread unrest in two months of demonstrations -- with police firing 800 rounds of tear gas in a single day at a dozen locations.

"It's very important to show that there can be peaceful and effective demonstrations," said 77-year-old lawyer Warwick Haldane.

"No one is going to throw anything, and I hope we're not going to get tear gassed or charged by anyone," he added.

Some expressed sympathy with the more hardcore protesters battling police.

One man, wearing a suit, donned the protest movement's signature goggles, mask and a construction helmet.

On the helmet he had written the words "Won't sever ties even in the event of a nuclear explosion" -- implying he would stand by the protesters no matter what.

Yip, the lawyer, said the broad consensus on the demand to set up an independent commission of inquiry should be respected as the city reels under its worst political crisis in decades with no exit ramp in sight.

"The only commonality appears to be holding a public inquiry. I know it may not be easy but (the government) needs to think about how to accomplish this," she said.