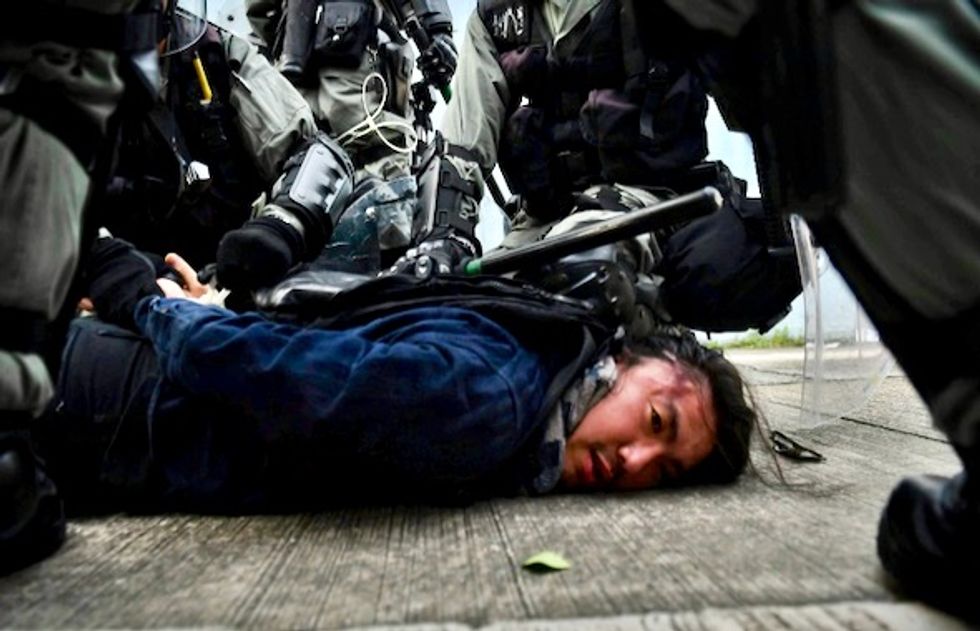 Hong Kong riot police on Saturday fired tear gas and baton-charged protesters who retaliated with a barrage of stones, bottles and bamboo poles, as a standoff in a working-class district descended into violence.

The city has been gripped by three months of street protests that started against a proposed extradition bill to China but have spun out into a wider pro-democracy movement.

An uneasy peace had descended this week but that was broken on Saturday as thousands of demonstrators -- many wearing hard hats and gas masks -- marched through the industrial Kwun Tong area, where they were blocked by dozens of officers with shields and batons outside a police station.

Frontline protesters pulled together a barricade of traffic barriers and bamboo construction poles, spray-painting walls with insults directed at the police.

AFP / Lillian SUWANRUMPHA Thousands of demonstrators marched through an industrial area, where they were blocked by dozens of riot police with shields and batons

As the afternoon wore on some fired stones from slingshots, prompting a charge from police wielding batons and pepper spray.

Tear gas swept across the road as protesters retreated, leaving a trail of broken bottles and at least one small fire in their wake.

Several of the black-clad protesters were detained as officers swept through, with police justifying their charge on "a large group of violent protesters" who had set fires and hurled bricks.

The city had appeared to have pulled back from a sharp nosedive into violence, with the last serious clashes taking place a week and a half ago just after protests paralysed the financial hub's airport.

AFP / Lillian SUWANRUMPHA Tear gas swept across the road as protesters retreated, leaving a trail of broken bottles and at least one small fire in their wake

Tension flickered throughout Saturday's march, where dozens of the most radical demonstrators known as "braves" had gathered, battle-hardened by a three-month street campaign.

"I understand being peaceful will not solve the problem," 19-year-old student protester Ryan told AFP, giving one name.

"The government won't respond to peaceful protest. If I am arrested it is because I come out to speak for justice."

Hundreds of thousands marched peacefully last Sunday, as a key protest group sought to regain the moral high ground in a city shocked at the level of violence.

But Saturday's face-off underscored the dangerous deadlock into which the city has sunk -- with the government unmoving in the face of protester demands, and demonstrators stubbornly refusing to leave the streets.

China has used a blend of intimidation, propaganda and economic muscle to constrict the protests in a strategy dubbed "white terror" by the movement.

Hong Kong-based airline Cathay Pacific has sacked staff over their political activities, while the MTR -- the city's metro operator -- has been pilloried for closing stations after Chinese state-media accused it of offering an 'exclusive' transport service to protesters.

Protests started against a bill that would have allowed extradition to China, but have bled into wider calls for democracy and police accountability in the semi-autonomous city.

Protesters say Hong Kong's unique freedoms are in jeopardy as Beijing tightens its political chokehold on the city.

Soaring living costs and few job opportunities have also driven many of the mainly young protesters to the streets.

Hong Kong's police force have become the target of the protesters' ire for their perceived heavy-handed response to the months of demonstrations.

As evening fell, scores of "braves" dug up bricks and tied metal barriers together a few hundred meters from the police as they appeared to dig in for more clashes.

One frontline protester explained his motivation for joining the street struggle.

"The government chose not to solve the problem through communicating with the protesters," Lueng told AFP.

"I don't see our future facing this regime, so gradually I stepped closer and closer to the front line."

AFP / Lillian SUWANRUMPHA Tension rippled across Saturday's march, where a number of frontline radical demonstrators known as 'braves' had gathered

Older Hong Kongers are divided on the motivation and tactics of the movement which has brought unprecedented chaos to a city once known for its safety and stability.

"The youngsters who come out have put their future at stake... they are doing this for Hong Kong," 65-year-old Dee Cheung told AFP earlier, before explaining why he joined the protests.

"There might be some things we don't agree with, like the 'braves' who tend to charge. But let's think about why they do that?"