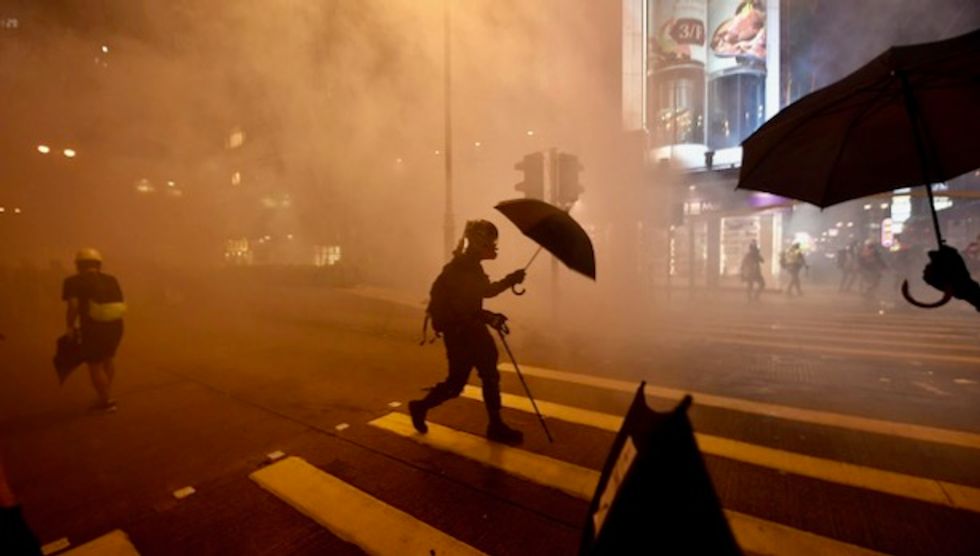 The semi-autonomous southern Chinese financial hub has seen two months of protests and clashes triggered by opposition to a planned extradition law that quickly evolved into a wider movement for democratic reforms.

Authorities in Hong Kong and Beijing this week signalled a hardening stance, including with the arrests of dozens of protesters, and the Chinese military saying it was ready to quell the "intolerable" unrest if requested.

But protesters have remained unyielding, vowing to hold multiple occupations and rallies in the coming days.

Officers with gas masks and shields charged at hundreds of protesters who had been besieging a nearby police station.

Masked demonstrators had smashed the windows of cars in the police parking lot and daubed nearby walls with graffiti. One team of protesters created a large slingshot -- held up by two members -- to launch bricks at the building.

Earlier in the day tens of thousands of protesters had marched through nearby streets, embracing their mantra "be water" -- a philosophy of unpredictability espoused by local martial arts legend Bruce Lee.

The seized roads, built barricades and even briefly blocked a cross-harbour tunnel.

"We will fight as guerrillas today and be water," a masked and helmeted 19-year-old, who gave her surname Lee, told AFP.

And there is no sign of the chaos abating.

Many of the chants and graffiti tags thrown up Saturday called for residents to join a planned city-wide strike on Monday.

Two marches are also planned for Sunday while the call for strike action appears to be gaining more traction than previous walkouts.

Under the terms of the 1997 handover deal with Britain, the city has rights and liberties unseen on the Chinese mainland, including an independent judiciary and freedom of speech.

But many say those rights are being curtailed, citing the disappearance into mainland custody of dissident booksellers, the disqualification of prominent politicians and the jailing of pro-democracy protest leaders.

Public anger has been compounded by rising inequality and the perception that the city's distinct language and culture are being threatened by ever-closer integration with the Chinese mainland.

Anger towards the police is at record levels with officers increasingly seen as Beijing's enforcers -- although police deny using excessive force and say they are facing increasingly hardcore protesters.

The past two weekends have seen a surge in violence by both protesters and police, who have repeatedly fired rubber bullets and tear gas to disperse projectile-throwing crowds.

Hong Kong chief executive Carrie Lam has made few concessions beyond agreeing to suspend the extradition bill and shied away from public appearances.

Protesters are demanding her resignation, an independent inquiry into police tactics, an amnesty for those arrested, a permanent withdrawal of the bill, and the right to elect their leaders.

Thousands of pro-government supporters also held a rally in a separate park on Saturday, many waving Chinese flags and chanting slogans in support of the police -- who have refuted allegations of using excessive force.

Beijing has increasingly pitched the anti-government protests as funded by the West.