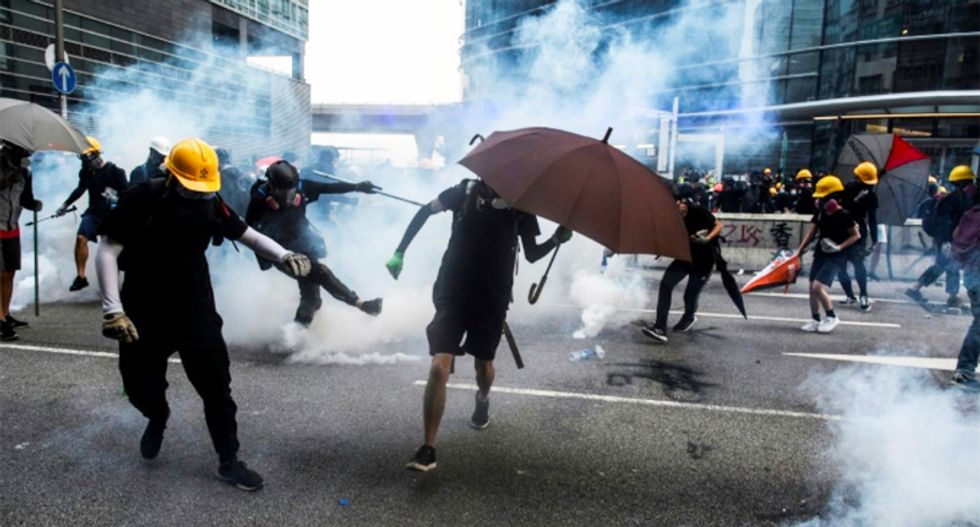 Hong Kong police on Sunday for the first time rolled out water cannon trucks in clashes with protesters, after months of escalating violence, but stopped short of using them.

The financial hub has been gripped by three months of street demonstrations that started against a proposed extradition bill to China, but have spun out into a wider pro-democracy movement.

As thousands of people who had gathered at a sports stadium marched in the pouring rain to Tsuen Wan, a town in the New Territories, a group of hardcore protesters erected makeshift roadblocks and dug up bricks from the pavements.

After firing tear gas to disperse the crowds, police rolled out water cannon vehicles into the streets, unfurling a warning sign that they would fire if protesters did not leave.

Police have previously said the vehicles, complete with real-time surveillance cameras and multiple spray nozzles, would only be used in the event of a "large-scale public disturbance".

Throughout the protests, Beijing has used a mix of intimidation, propaganda and economic muscle to constrict the protests in a strategy dubbed "white terror" by the movement.

The MTR -- the city's metro -- is the latest Hong Kong business to be rebuked by the public, after appearing to bend to Chinese state-media attacks accusing the transport system of being an "exclusive" service to ferry protesters to rallies.

On Sunday the MTR shut stations near the main demonstration area in Tsuen Wan, in the second day of station closures in a row.

A second rally of a few hundred, some of them family members of police, criticised the government for leaving officers to handle the brunt of the crisis, while also calling for an independent investigation into the police handling of the protests.

"I believe within these two months, police have got enough opprobrium," said a woman who asked not to be named and said she was a police officer's wife.

"I really want you to know even if the whole world spits on you, we as family members will not. Remember, your job is to serve Hong Kong residents, not be the enemies of Hong Kong."

The city's officers are often the focus of protesters' anger because of their perceived heavy handling of the rallies.

Ten people were left in hospital after Saturday's clashes -- two in a serious condition -- staff said, without detailing if they were police or protesters.

On Saturday police baton-charged protesters and fired tear gas, while demonstrators threw rocks and bottles later into the night in a working-class neighbourhood.

Protesters say Hong Kong's unique freedoms are in jeopardy as Beijing tightens its political chokehold on the semi-autonomous city.

The city had appeared to have pulled back from a sharp nosedive into violence, with the last serious confrontation taking place more than a week ago, shortly after protests paralysed the airport.