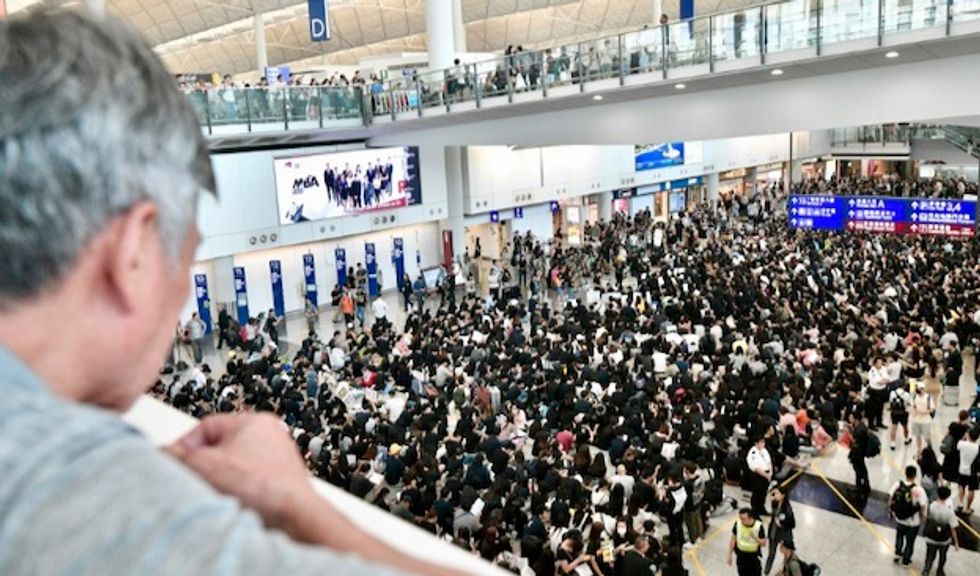 Hong Kong's pro-democracy movement faces a major test this weekend as it tries to muster another huge crowd following criticism over a recent violent airport protest and as concerns mount over Beijing's next move.

Ten weeks of protests have plunged the international finance hub into crisis with the communist mainland taking an increasingly hardline tone, including labelling the more violent protester actions "terrorist-like".

Chinese state media have put out images of military personnel and armoured personnel carriers across the border in Shenzhen, while the United States has warned Beijing against sending in troops, a move many analysts say would be a reputational and economic disaster for China.

The nationalistic Global Times newspaper said there would not be a repeat of the Tiananmen Square crackdown, in which hundreds -- or even thousands -- are believed to have been killed, if Beijing moves to quash the protests.

"The incident in Hong Kong won't be a repeat of the June 4th political incident in 1989," it said, insisting the country now had more sophisticated approaches.

It was a rare reference to the bloody events, which are taboo in China.

Hong Kong's protests were sparked by opposition to a plan to allow extraditions to the mainland, but have since morphed into a wider call for democratic rights in the semi-autonomous city.

Millions of people have hit the streets while clashes have broken out between police and small groups of hardcore protesters for ten consecutive weekends.

For most of that time, US President Donald Trump has taken a hands-off approach to the unrest but began speaking up this week, suggesting any potential trade deal with Beijing could be upended by a violent response from the mainland.

If Xi sat down with the protesters, Trump said, "I'll bet he'd work it out in 15 minutes."

Activists are now planning to hold a major rally on Sunday, which is being billed as a "rational, non-violent" protest designed to show the movement still maintains broad public support after suffering a setback earlier in the week.

On Tuesday, protesters blocked passengers from boarding flights at the city's airport and later assaulted two men they accused of being Chinese spies.

The shocking images damaged a movement that until then had largely only targeted the police or government institutions, and prompted some soul-searching among protesters.

China's propaganda apparatus seized on the violence, with state-media churning out a deluge of condemnatory articles, pictures and videos.

Sunday's rally is being put together by the Civil Human Rights Front, a protest group that advocates non-violence and has previously been the driving force behind record-breaking rallies in June and July that saw hundreds of thousands of people hit the streets.

But the likelihood of renewed clashes over the weekend remains high.

On Saturday, activists have vowed to gather in Hung Hom and To Kwa Wan -- two harbourside districts popular with mainland Chinese tourists -- despite police banning their proposed marches.

And while police have given permission for protesters on Sunday to rally in a major park on the island, they have forbidden demonstrators from marching through the city.

Previous bans in the last few weeks have simply been ignored by demonstrators, leading to running battles with riot police.

Authorities say they have been compelled to ban recent rallies because of increasing violence used by hardcore protesters, who have often targeted police stations alone their marching routes with bricks, slingshots and Molotov cocktails.

Hong Kong maintains freedoms unknown on the authoritarian mainland under a 50-year deal that came into effect when the former colony was handed back to China by Britain in 1997.

Many Hong Kongers say those liberties are being eroded and have hit the streets in huge numbers in recent years.

Yet their demands to elect their own leaders and halt sliding freedoms have fallen on deaf ears.

The current protests are the biggest threat to Beijing's authority since the handover and as violence has escalated, party leaders have only hardened their tone.

In a new editorial on Friday, the staunchly nationalist state-run Global Times said it was "imperative then for the central government to take direct actions" if the "riots intensify".

A Black man from Virginia called 911 seeking help but wound up getting shot by a police officer ten times despite being unarmed.

NBC Washington reports that 32-year-old Isiah Brown was given a ride back to his Spotsylvania County home by a sheriff's deputy this week after his car broke down at a nearby gas station.