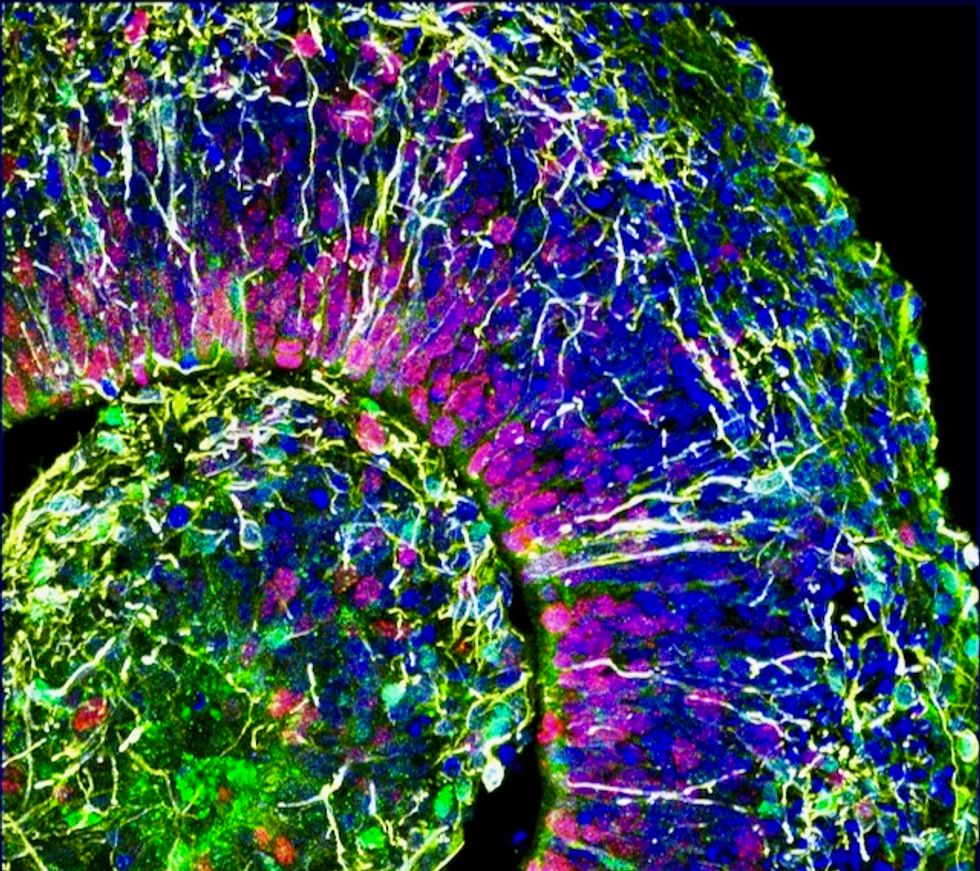 A cross-section of a brain organoid, showing the initial formation of a cortical plate, with each color marking a different type of brain cell Muotri Lab/AFP / HO

Scientists reported Thursday they had picked up human-like electrical activity in lab-grown brains for the first time, paving the way to model neurological conditions and answer fundamental questions on how our gray matter develops.

It's not clear whether the pea-sized brains are conscious: the team behind the breakthrough suspect they're not because the activity resembles that of preterm babies, but they cannot say for certain, opening up a new ethical dimension to this area of research.

So-called "cerebral organoids" derived from adult stem cells have been around for a decade or so but have never previously developed functional neural networks.

"If you had asked me five years ago 'Would you think that a brain organoid would ever have a sophisticated network able to generate a brain oscillation?' I would say no," Alysson Muotri, a biologist at the University of California San Diego, told AFP.

A paper published by Muotri and his colleagues in the journal Cell Press said that two factors were responsible for the breakthrough. The first was a better procedure to grow stem cells, including optimizing the culture medium formula.

The second was initially surprising, but also intuitive when the researchers thought about it: simply allowing the neurons adequate time to develop, just as babies' brains develop in the womb.

"The very early stages of human neurodevelopment are encoded in our genome," explained Muotri.

The team began to detect bursts of brain waves from organoids from about two months.

The signals were sparse at first and all at the same frequency, a pattern seen in very immature human brains. But as they grew, they produced waves at different frequencies, and the signals appeared more regularly, suggesting further development of their neural networks.

Researchers then compared the brain wave patterns with those of human brains in early development, by training a machine learning algorithm with the activity recorded from 39 prematurely born babies.

The program was successful in predicting how many weeks the organoids had been developing in their dishes, suggesting they shared a similar growth trajectory to brains in their natural setting.

The point at which newborn babies attain consciousness, and the definition of consciousness itself, are both contested among scientists.

A French study in 2013 that looked at the brain activity of babies found they began to think about images of faces they were shown from the age of five months, appearing to store the visuals in their temporary "working memory" -- a faculty they linked to perceptual consciousness.

Muotri Lab/AFP / HO Pea-size brain organoids at 10 months old; so-called "cerebral organoids" derived from adult stem cells have been around for a decade or so but have never previously developed functional neural networks

Earlier, less sophisticated organoids were used to model what happens when the brain is exposed to diseases like the Zika virus which causes physical malformations.

But there are also a host of neurological conditions such as autism, epilepsy, and even psychiatric conditions where problems arise from how the brain network is wired, not from malformations.

By creating brain organoids from the stem cells of individuals with these conditions, scientists could better model them and perhaps one day find cures.

They also hope to answer more fundamental questions. Muotri said the organoids development plateaued around nine to 10 months, for reasons that aren't yet clear.

"I'm curious about that. I wonder if it's because we don't have a vascularization system to allow the nutrients to get inside, or it could be that we are just lacking stimulation" in the form of sensory input.

He hopes to test both hypotheses.

About whether the brain organoids are conscious, Muotri said he suspects not because of its early stage of development.

"But if you ask me, 'How do you know?' I would say I have no evidence either way, because we don't even know how to detect consciousness in other systems," he said.

"As we get closer to the human brain, all of these ethical questions will appear," he admitted, proposing that the field be subject to agreed-upon limits and regulation.