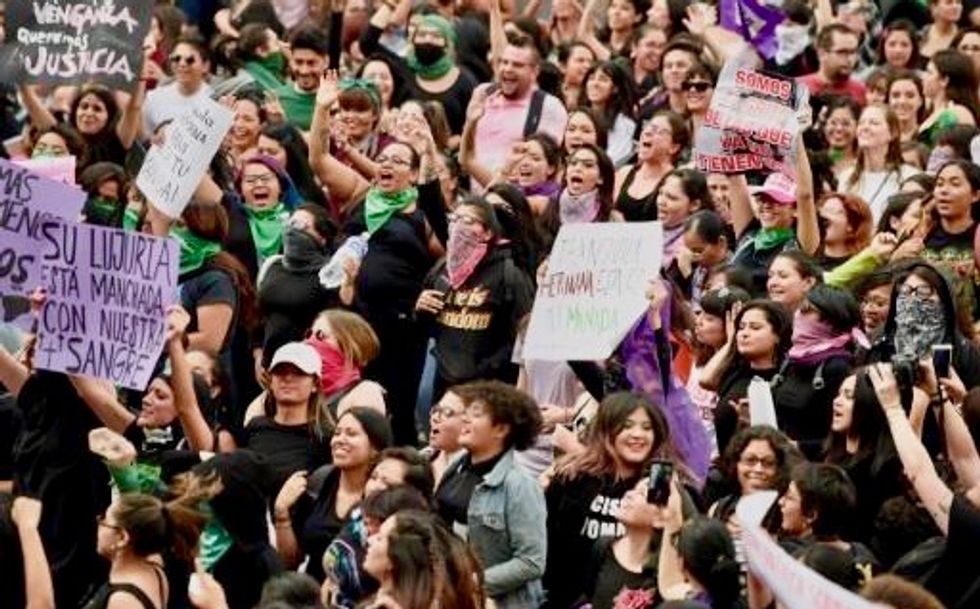 To shouts of "I do believe you!" and "My friends protect me, you don't," the initially peaceful rally ended with some participants lighting a fire on the second floor of a police building and vandalizing a bus station.

The protesters also sprayed graffiti on the capital's Independence Monument, adorning the base of the stone edifice with the slogan "damned pigs!"

Two reports of attacks on women this month have sparked outrage and bitter recriminations against the city's police force, with protesters mobilizing on social media through the hashtag #NoMeCuidanMeViolan, or "They don't protect me, they rape me."

A 17-year-old girl said four police officers assaulted her in a patrol car in the city's north.

An officer was accused of assaulting a 16-year-old in a museum just days later.

"I worry young women cannot go to school or return from a quiet party because someone will rape them, just because they can," said Melissa Ortiz, who attended the march.

The 40-year-old said there were few protections for women, especially when the men accused were the authorities "that should be protecting us."

The city has suspended six police officers as part of the investigation into the 17-year-old's alleged assault, but no arrests have been made. The prosecution has also said there were inconsistencies with the teenager's account of the incident.

A man was arrested last week in connection with the alleged attack on the 16-year-old.

Violence against women, in the form of femicide, abuse, harassment and sexual assaults, has intensified in the country in recent years. According to the United Nations, an average of nine women are murdered daily in Mexico.