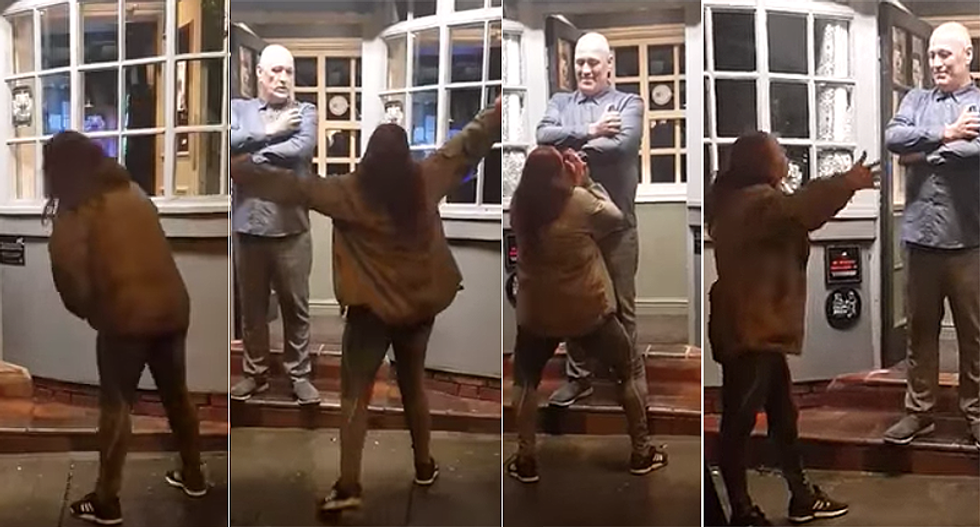 A gay man is being celebrated as a hilarious good Samaritan for handling an angry drunk woman, who was screaming homophobic slurs at him at the same time.

LGBTQNation found the video on Facebook showing the 52-year-old woman outside the Black Friar pub in Newcastle-under-Lyme. She picked a fight with the owner, Ryan Carrington, the site explained.

“You’re a gay bod and you don’t like women. That’s what your problem is,” the woman drunkenly says while accidently running into the wall. She then turns to call him a "f*cking fat f*ggot."

She then proceeded to make all sorts of strange noises while taunting him, but Carrington owned her.

“I’ve been insulted by better than you darling, by people with far more intelligence," he said.

She then taunted him more, calling him "a f*cking psycho" and waving her fingers in his face. She ultimately shoved him and it was clear he wasn't playing around anymore. He told her to stay away and she slapped him.

He later explained that being the owner of a pub means he has to handle any manner of situations and expects he'll likely be filmed while doing so.

“Being a publican [pub owner] I am well aware of cameras and have to act accordingly, yes my patience was tested but you have to think of pity for this woman,” he explained in a Facebook post. He also noted that the incident began before that video even started.

“I doubt it’s the life she would have chosen if she had a choice. Let’s not condemn her, let’s try to help and educate, far more rewarding," he said.