'Just the beginning': Massive protests in UK as thousands flood streets to #StoptheCoup 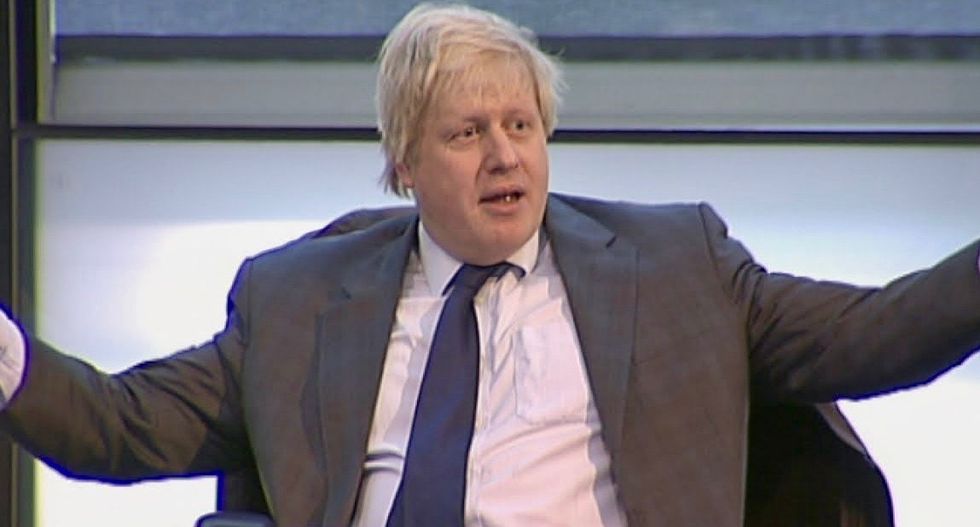 Many thousands of people took to the streets across the United Kingdom on Wednesday evening—including crowds in central London who surrounded the Palace of Westminster—demanding the end of efforts to suspend Parliament launched earlier in the day by Prime Minister Boris Johnson.

"If Boris Johnson thinks he can suspend parliament and force through no deal he has another think coming. We will build a mass movement to save democracy, and everyone who wants to stop this travesty must get ready to mobilize, demonstrate and resist." —Clive Lewis, UK Labour Party MP

As the thousands of protesters assembled in the streets in numerous cities, an online petition calling for a stop of the temporary prorogation of Parliament had gathered more than 1.1 million signatures, ten times the necessary amount to trigger an official response from MPs.

As this video dispatch from the Guardian newspaper shows, thousands of people flooded the streets outside Westminster—shouting "Stop the Coup! Stop the Coup!" and "Boris Johnson! Out, out, out!—as they denounced the move by the Tory-led government and the subservience of Queen Elizabeth who approved the proroguing of Parliament at Johnson's request:

"We're here because our democracy wasn't given to us as an act of generosity or charity by the people on top," said Owen Jones, a progressive activist and columnist for the newspaper, speaking as a protest particpant. "It was won through the struggle and sacrifice of our ancestors and it's not for an unelected prime minister to shut down the elected parliament to ram through a no deal [Brexit] for which he has not democratic mandate."

Jones repeated and expanded on the point in subsequent social media videos—in which he accused Johnson of starting a "war with our democracy"—and in more dramatic fashion during a speech given to the large gathered crowd:

Paul Mason—another journalist, book author, and political activist—was also at the demonstrations in London and said he was now calling for people across the U.K. to join those in the streets to put their bodies on the line against the orchestrated overthrow of the British government by Johnson and other right-wing elites.

Asked about his message for U.S. President Donald Trump, who earlier in the day had weighed in on the situation by backing Johnson's effort, Mason did not hold back.

"Fuck Trump is my response. Full stop. Exclamation mark. Underlined," Mason said. "The guy doesn't understand democracy. What right has he to dictate the outcome of a British political crisis."

Members of the opposition Labour Party—including a letter sent to the Queen by Leader Jeremy Corbyn requesting a meeting to discuss her approval of the proroguing of Parliament—said they would fight back against the anti-democratic "smash and grab" moves by Johnson with all their might.

"If Boris Johnson thinks he can suspend parliament and force through no deal he has another think coming," said Labour MP Clive Lewis, who serves as the shadow government's Treasury minister. "We will build a mass movement to save democracy, and everyone who wants to stop this travesty must get ready to mobilize, demonstrate and resist. MPs, too, will have to play their part. They'll have to drag me out of the chamber."

Even after night fell in London, huge crowds refused to leave the city's streets as the demonstration turned into an impromptu sit-in:

Deputy leader of the nation's Green Party, Amelia Womack, was also in the crowd. "We're here to stand against Boris Johnson's coup," she told the Guardian. "We have a representative democracy and by suspending parliament, you are removing people’s democratic right."

While many on the left in the UK had warned that Johnson might take such drastic measures to push through a no deal Brexit regardless of the consequences or his mandate, Womack said she "didn't think he would make such a brutal move that showed such a disregard for our parliamentary procedures."