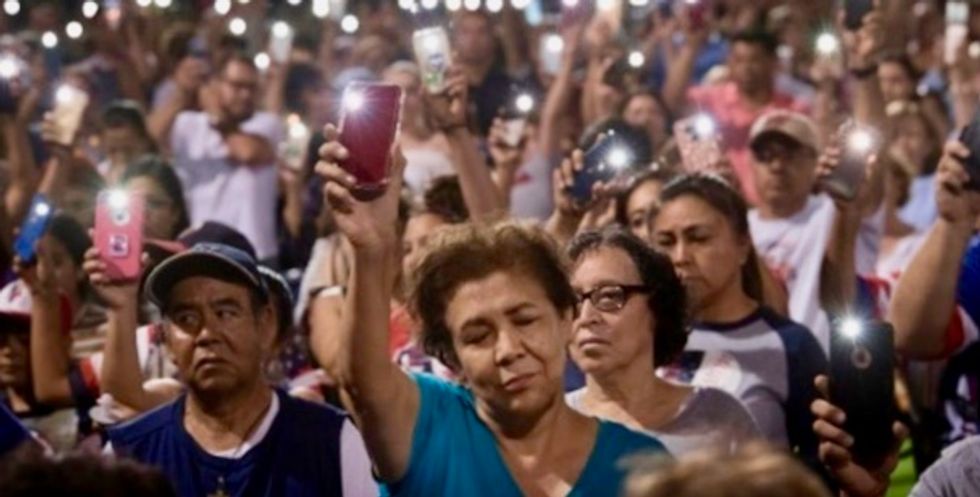 US-based Latinos voiced their fears Monday and pointed the finger squarely at President Donald Trump over a gun massacre that appears to be the deadliest hate crime ever committed against their community.

Many said they were still coming to terms with the murders of 22 people on Saturday at a Walmart store in El Paso, Texas, by a man who traveled some 650 miles (1050 kilometers), reportedly to shoot as many Mexicans as possible.

Eight Mexican nationals are among those killed in what authorities are investigating as a case of possible domestic terrorism. At least 25 people were also wounded.

For representatives of the Latino community, the mass shooting can be directly linked to the hateful rhetoric on minorities that has flourished since Trump's election in 2016.

"The president's rhetoric has fanned the flames of discord in this country," Angelica Salas, head of the Los Angeles-based Coalition for Humane Immigrant Rights (CHIRLA), told AFP.

"And as he prefers chaos, he most likely enjoys seeing conflict between communities rise."

Dominique Diaz, a resident of El Paso, said the fact that the shooter -- identified as 21-year-old Patrick Crusius and in custody -- had traveled so far to target a mostly Hispanic region reflected mounting racism and anti-immigrant sentiment in the country.

"It's pretty difficult to even comprehend," he said.

For Pablo Alvarado, executive director of the Los Angeles-based National Day Laborer Organizing Network, the shooting in El Paso, which lies right across the border from Mexico and has a large majority Latino population, amounts to a declaration of war against Hispanics.

"We have moved from being scapegoats to being targets of this kind of senseless racist violence," he told AFP. "This atrocious act of violence is a declaration of war against our community."

The tragedy in El Paso was one of three mass shootings in the United States in less than a week.

Nine people were killed and dozens were injured in Dayton, Ohio, hours after the El Paso massacre. Authorities have not determined a motive for the attack.

A week earlier, a 19-year-old gunman opened fire at a garlic festival in Gilroy, California, killing three people, including two children, and wounding a dozen others.

The gunman in Gilroy, who reportedly posted racist comments related to the festival on social media, died of a self-inflicted gunshot wound while the assailant in Dayton was gunned down by police.

Luz Gallegos, of TODEC legal center, an immigrant rights organization in Southern California, said the shootings had sown fear among Hispanics who no longer feel safe.

"The president has changed the law of the land and has empowered white supremacist groups... and given them the green light to act on their hate," Gallegos said.

Salas said there was no doubt in her mind that people with racist tendencies today felt emboldened, thanks to Trump, to attack people of color or anyone considered different.

"Trepidation has been a much more common feeling since President Trump came to office," she said.

Still, community leaders said they were encouraging Latinos to stand proud and not succumb to fear.

"The question for me is how we are going to respond, and we are not going to do so the same way because when we have fear and hatred in our heart we cannot defend ourselves rationally," Alvarado said. "We need to remove the fear and step up and call the attacks as they are -- evil and white supremacist."

As political rivals heaped scorn on Trump over repeated controversial remarks he has made against immigrants, the president on Monday expressed "horror" over the twin weekend attacks and urged the nation to unite.

"Our nation must condemn racism, bigotry, and white supremacy," Trump said, adding that mental illness was the main culprit for the violence, rather than the ready availability of firearms or extremist thinking.