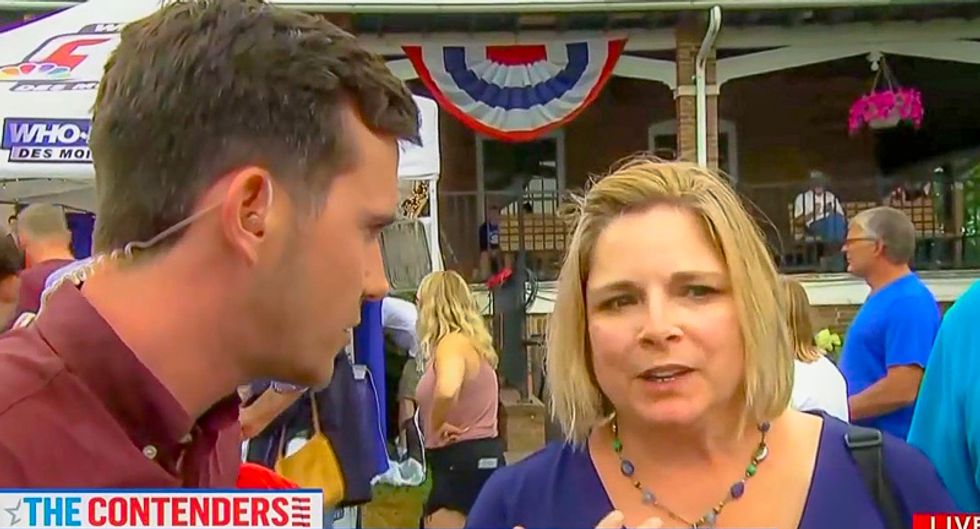 A self-identified "lifelong conservative" told MSNBC on Sunday that she is considering voting for a Democratic presidential candidate because she is disgusted with President Donald Trump.

In an interview at the Iowa State Fair, Kate Miller told MSNBC that she had chosen Kamala Harris in an unofficial fairground poll.

"I’m a lifelong conservative," Miller revealed. "I actually campaigned door to door for Chuck Grassley his first year as a Senate candidate. But I cannot vote for Donald Trump. He is not a conservative. I don’t think he’s a good man and when you watch a cabinet member after cabinet member fall away from him, I just can’t vote for him."

Miller said that she wanted a Democratic candidate who "is reasonable on borders."

"I’m an educator and we’ve got to do something about education so that’s the person that I’m looking for," she continued. "It’s really hard because there are all these stump speeches and I don’t know what they believe."

Miller's daughter, Taylor, was in agreement.

"I can’t vote for Donald Trump and if there was a better conservative, I would probably vote for them," Taylor Miller explained. "But he says so many things that are just absolutely disgusting and tweeting foreign policy is is not presidential enough."

She added: "I really want a Democratic candidate that I can get behind and support and like my mom said, isn’t completely crazy on immigration and really will make things like schools safer so that I can have a place here in my future and just make the country better."