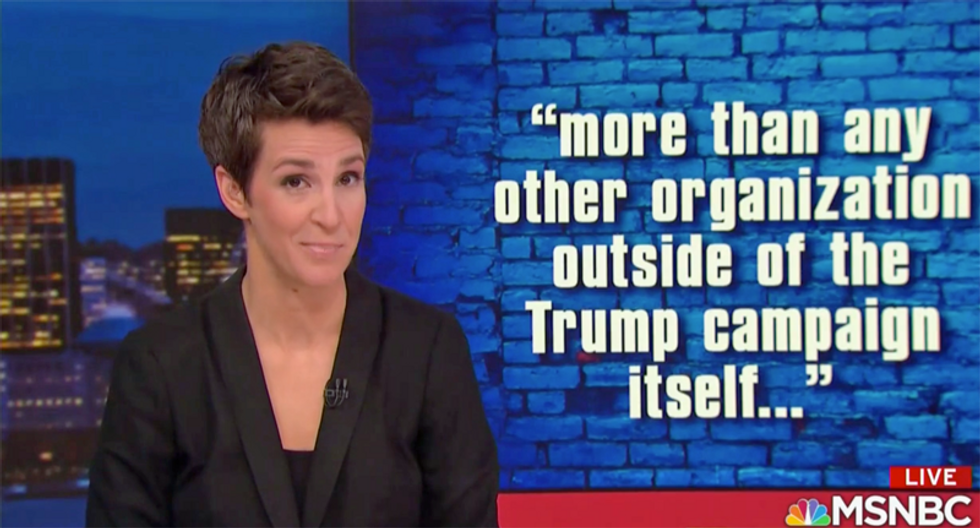 The protester was credentialed to cover the event for the Epoch Times, which is controlled by Falun Gong.

"Well, NBC News has a scoop out today about that group, about how that paper, the Epoch Times has transformed itself a lot in the Trump era. It’s a real revelation, this reporting from NBC News," Maddow said. "I mean, Epoch Times and its media group, they’ve made themselves into a whole new thing entirely and in a very big way."

She read a quote from the report, by Brandy Zadrozny and Ben Collins.

"By the numbers, there is no bigger advocate of President Donald Trump on Facebook than The Epoch Times. The small New York-based nonprofit news outlet has spent more than $1.5 million on about 11,000 pro-Trump advertisements in the last six months, according to data from Facebook’s advertising archive — more than any organization outside of the Trump campaign itself, and more than most Democratic presidential candidates have spent on their own campaigns," the report read.

"Before 2016, The Epoch Times generally stayed out of U.S. politics, unless they dovetailed with Chinese interests. The publication’s recent ad strategy, coupled with a broader campaign to embrace social media and conservative U.S. politics — Trump in particular — has doubled The Epoch Times’ revenue, according to the organization’s tax filings, and pushed it to greater prominence in the broader conservative media world," the story reported.

"When it comes to their revenue, what seems to be really driving things are parts of the epoch media group that are producing online-only content under an entity called the New Tang Dynasty," she continued.

"So the newspaper that until just recently promoted the interests of the dissident Chinese religious movement is now whole-hog on board both in its newspaper and its related media entities with all of the completely around-the-bend pro-Trump intergalactic conspiracy theory stuff," she explained.

"Literally about, you know, drinking the blood of sacrificed children and the Illuminati and their persistent terrifying bloodlines," Maddow continued. "Alongside all the explicitly pro-Trump stuff and this kind of stuff, there is also just, like, traditional Grade-A American paranoia brain rot stuff like how Ted Bundy the serial killer was groomed by the Deep State for politics, but he branched off into being a serial killer? Also how the deep state is hiding the true science of astrology, and as you might expect, naturally, there is the 9/11 stuff.