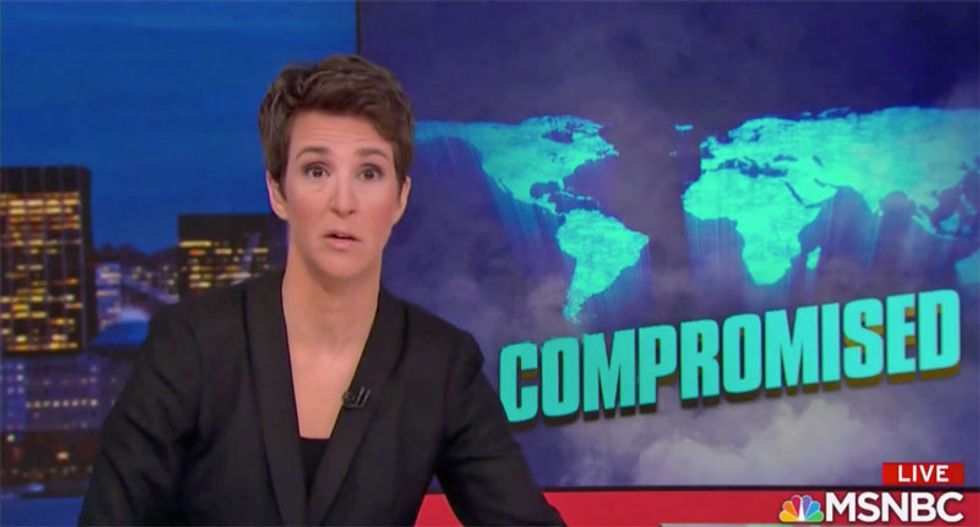 "The Chinese military, the peoples army just released a new video bragging about their mad skills, showing off their weapons, their long-range sniper skills," Maddow reported. "In this video they just released, they appear to be going out of their way showing how the Chinese army could be deployed to devastating effect against civilians, against rioters, protesters -- some of that involves water cannons, street maneuvers by uniformed soldiers using their shields, using their guns."

She showed a clip of soldiers in riot gear chanting, "fall back."

"Why would soldiers in the Chinese army need to shout 'fall back, fall back' in English as they confront people in the streets? The only place in China you’d ever have to do anything in English is Hong Kong, where lots of people speak English," she noted.

The host played video showing the crackdown in Hong Kong being conducted by police.

"Here at home, President Trump was asked about the situation in Hong Kong and he responded with one of his patented both-sidisms. He said I hope it works out for everybody, including China, by the way. I’m sure China is heartened to know that the American president is hoping this is all going to work out for them as they threaten overtly to use the People’s Liberation Army in the streets against Chinese unarmed civilians in Hong Kong," she explained.

"And so here’s this new thing that we’ve never really had to contend with before. While President Trump made those remarks today, while he spoke at the White House about China and the protests in Hong Kong, what China might do to those protesters, the president’s eldest son at that moment was in Indonesia launching a new Trump-branded real estate project," she explained.

"Of course, for the company the president still owns and still profits from, his eldest son was touting their latest integrated lifestyle resort and theme park," she said. "Theme park! Trumpland! It’s not Trump and -- it’s not like dystopian Disneyland -- but there is an amusement park that’s attached to this real estate development, to this new bunch of Trump-branded condos and hotel rooms."

"Here’s the thing. When we first learned the details of this new Indonesia project the president’s company is building, we learned as part of that the exciting news that the theme park part of this development, the part that presumably adds most of the value to the prospect of living in these Trump condos or representing these hotel rooms, the adjacent theme park for this development was to be built by the Metallurgical Corporation of China, a state-owned Chinese construction company," she explained.

"And the advancement of that project was being celebrated today literally at the same moment while the president was saying he hopes this unfolding maybe bloodbath in Hong Kong works out okay for China," she noted.

Maddow said, "even just looking at him and China alone, he and his family literally today celebrating a business deal that will mean the president will personally benefit potentially to the tune of hundreds of millions of dollars. We think maybe from Chinese government investment, while he at that moment is commenting at the White House on China’s threat to use military force against his own civilian what does a U.S. president have to say about that while they’re stuffing his pockets at the same time?" she asked.