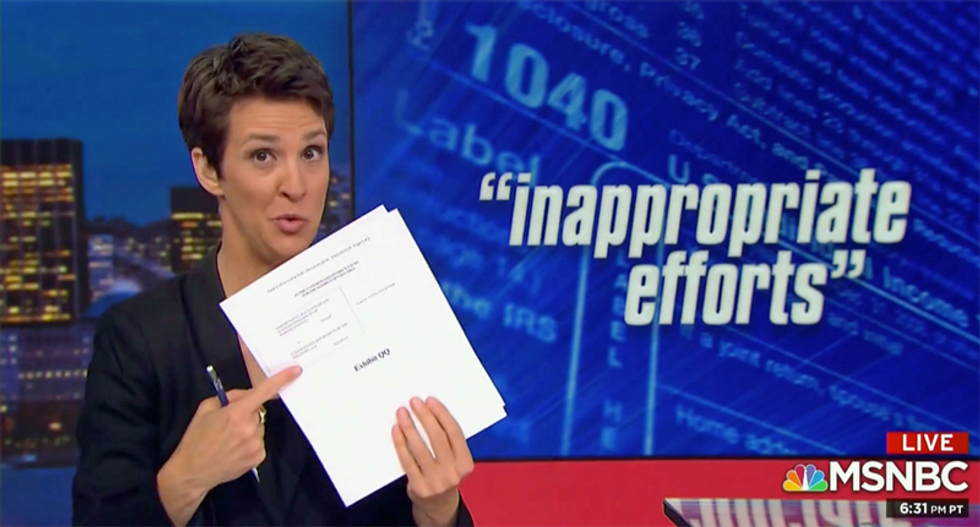 MSNBC's Rachel Maddow reported Thursday on the "confetti canon" of new filings in the legal battle between the Internal Revenue Service (IRS) and the House Ways and Means Committee over access to President Donald Trump's tax returns.

Maddow reported on Exhibit QQ in the latest filings, which is a letter from Ways and Means Chairman Richard Neal (D-MA) to Treasury Secretary Steven Mnuchin.

Maddow explained the significance of the revelation.

"Meaning the mandatory program that requires the audit of the income tax returns of a sitting president. What the committee is saying that they didn’t ask for it, but a whistle-blower came forward to them from inside the government to give them information, to give them credible allegations of something to do with the way the IRS is handling Trump’s taxes and the audit of Trump's taxes," she reported.

"Just another day in the president’s finances. Now it’s a federal judge being offered information from a congressional committee about an unsolicited whistle-blower who has come forward with credible allegations of inappropriate efforts to influence the handling of the president’s tax audit inside the IRS," Maddow concluded.