Maddow: You have to watch what the lying White House does -- and not what they say 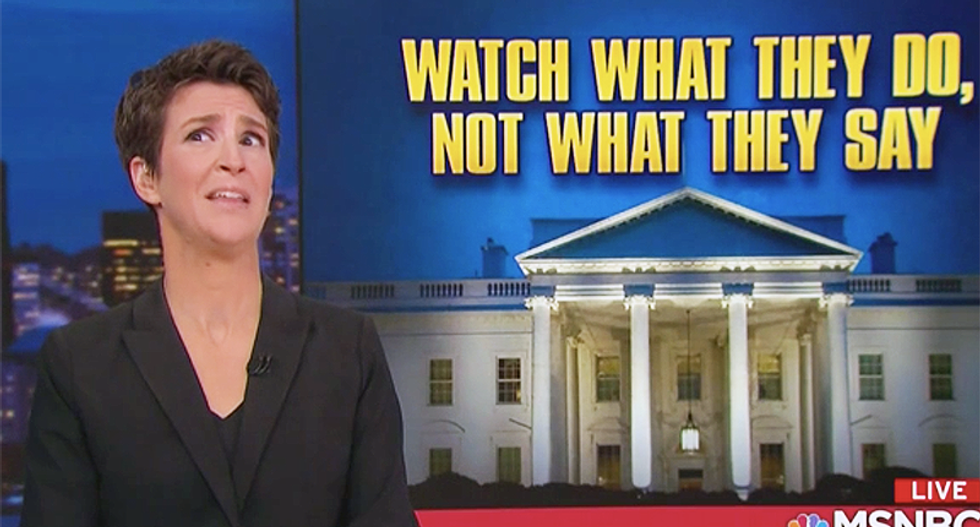 MSNBC host Rachel Maddow opened her show with a quick assessment of her thoughts on the ridiculous that the president of the United States regurgitated into the mouths of his supporters Wednesday.

She began by noting that they don't do press briefings at the White House anymore; instead, they've turned to talking to the president directly as he enters or exits the building to go off on his campaign trips or vacations.

"Today the president held a long one of these," she said. "One of the ones where he tried to push everyone's buttons, the president is denouncing the prime minister of our allied Denmark. He's calling her nasty. That will get some headlines. The president attacked American Jews for a second straight day today, saying they have dual loyalty because they're Jews. Americans of other religions don't have that dual loyalty or his suspicions of dual loyalty, Jewish-Americans do, because of their religion."

She noted that the president called himself "the chosen one" today.

"If the president's words are not at all a reliable indication of whether something that he's attesting to is in fact true, when his words even about his own opinions and his own plans and his own actions are likely to be rendered moot by the very next thing he says on the subject, the very next time he addresses," Maddow explained. "Because he's more likely than not to contradict himself entirely even when only talking about himself."

She wondered if the purpose of yelling at the reporters over the helicopter noise was really just to have their attention to things that would normally be ignored.

"When his words are conveyed to the American people, that results in the American people having less information and not more," she said. "Then, why do we do this? I mean, then, maybe it is time to go into auto-shutoff mode from the heat. From the hot air at least."

She noted that Politico had a headline about tuning out the White House, which can be a dangerous idea in a world where Trump is allowed to go unchecked. Instead, Maddow proposed, "watch what they do -- not what they say."

Watch her full opener below: