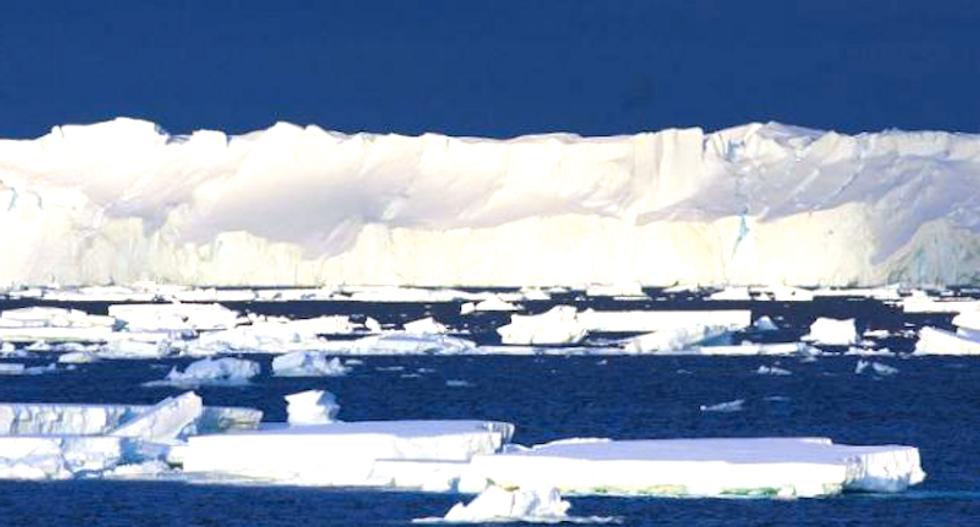 The Totten Glacier, the most rapidly thinning glacier in East Antarctica, is shown in this image from yhe Australian government's Antarctic Division taken in March 2015 (AFP)

As the planet's polar ice sheets destabilise amid rising temperatures, a landmark UN assessment of Earth's retreating frozen spaces is also set to spell out how melting mountain glaciers will impact humanity in the decades to come.

AFP has obtained an official draft summary of the forthcoming Intergovernmental Panel on Climate Change's report on oceans and the cryosphere.

It says that the Greenland and Antarctic ice sheets lost roughly 400 billion tonnes of mass annually in the decade to 2015, corresponding to a sea-level rise of around 1.2 millimeters each year.

But glaciers high up mountains also lost around 280 billion tonnes of ice each year during the same period, raising seas a further 0.77 millimeters annually.

He said that future sea-level rises from glacial melt alone would be limited to 30-50 centimeters as they contain a limited amount of ice.

"(Melting glaciers) contribute significantly to sea-level rise, it's just not this huge number that Greenland and Antarctica could contribute," added Levermann, who was not involved in the IPCC report.

There are roughly 200,000 glaciers -- vast, ancient reserves of ice -- on Earth and their relative smallness compared to the polar ice sheets makes them especially vulnerable to rising temperatures.

Their retreat is likely to impact inland communities the world over, for whom glaciers are a key water source.

The glaciers nestled high in the Himalayas provide water for 250 million people in nearby valleys and feed the rivers upon which a further 1.65 billion people rely for food, energy and income.

One study referenced in the IPCC report warns that Asian high mountain glaciers could lose more than a third of their ice, even if humans slash greenhouse gas emissions and limit global warming to 1.5 Celsius (2.6 Fahrenheit).

A continuation of "business-as-usual" in the coming decades with a global economy still powered mainly by fossil fuels could see two thirds lost.

The IPCC summary said that areas of the central and western Himalayas are already facing a noticeable fall in water for irrigation.

The summary also warned that in regions with little ice cover, including Central Europe, North Asia and Scandinavia, glaciers were projected to shrink 80 percent by 2100.

One study this year by scientists in Switzerland warned that unchecked emissions could see more than 90 percent of Alpine glaciers disappear by century's end.

Harry Zekollari, from Delft University of Technology in the Netherlands, said most people did not appreciate how crucial the giant ice structures were.

"A glacier is a reservoir. A healthy glacier will typically melt in summer and become a bit bigger in winter. That means that when people need water most, they get water from the glacier," Zekollari told AFP.

The citizens of La Paz, Bolivia's administrative capital, get as much as 30 percent of their water from Andean glaciers during the dry winter months.

"About 100 neighborhoods were without any water for more than a month, it was like a horror movie from the future," Marcos Andrade, director of the Laboratory of Atmospheric Physics at San Andres University, told AFP.

"People were fighting for their water."

Despite this stark example of what can happen when glacial water supply is disrupted, Andrade said there was a paradox in explaining how melting glaciers are bad news for agriculture.

"We have now more water from the glaciers because they are melting and farmers maybe don't realize that," he said.

"Things are going better for them at the moment. But once the water reaches a peak it will be scarce and it's going to be something we are probably going to fight over."

The IPCC says glacier run off is likely to continue to increase in the short term before declining late century, bringing increased instability and more landslides, avalanches and more polluted water.