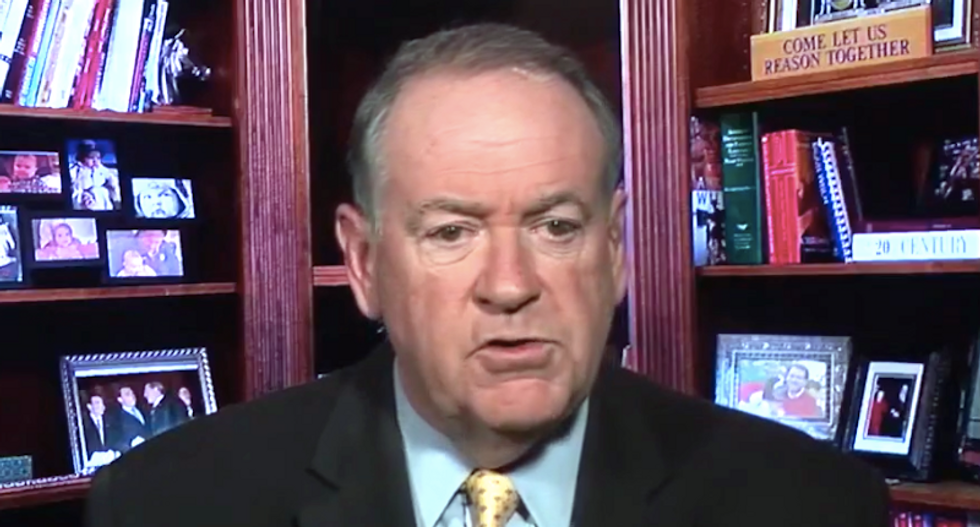 Mike Huckabee showed up on Fox News Monday morning to weigh in on the weekend’s two domestic terror mass shootings that have now left 31 people dead in Texas and Ohio. The twice-former GOP presidential candidate insisted the problem central to mass shootings is “the lack of thought and prayers,” and too little religion – not too many guns, or the racist, white supremacist beliefs of President Donald Trump and the president’s supporters.

“The common denominator in all of this is not the particular weapon,” the NRA-defending Huckabee, who last year after another mass shooting suggested a pencil is just as much an assault weapon as an AR-15, told host Bill Hemmer.

“It’s the hate inside the heart. It’s the loss of morality. It’s that disconnecting from a God who values all people, and who would never let me do that to another person, because I would be basically doing it to God and to myself, to just destroy another human life. That’s just not how we’re hardwired from the Father above,” the former Arkansas Republican governor said, as Media Matters reports.

Separately, on his website Huckabee wrote that “the lack of thought and prayers is probably the single biggest factor in what is behind them,” referring to the weekend’s two domestic terror mass shootings.

“I will keep ignoring the scoffers and saying prayers and urging everyone to join together and do the same,” the twice-former GOP presidential candidate and ordained Baptist minister concluded. “It’s not a meaningless gesture.  It’s the only thing that’s ever really going to help.”

Gov. Huckabee went on to tell Fox News that what “hurts” him “the most,” is not the loss of 31 lives, nor their families, nor the  survivors and their families whose lives are forever changed, but “that we’ve got a lot of our country that are utterly disconnected from any sense of identity with their Creator, and with His love for them, and His love for the people that they hate.”

Huckabee also wholly ignored his own daughter’s complicity in defending and promoting President Trump and his racist, white nationalist, and white supremacist beliefs and agenda. Trump is at the very least in part responsible for the rise in hate crime violence and white supremacist violence, including mass shootings.