#MoscowMitch showed us McConnell's shamelessness -- but his ruthless, right-wing court-packing is much worse 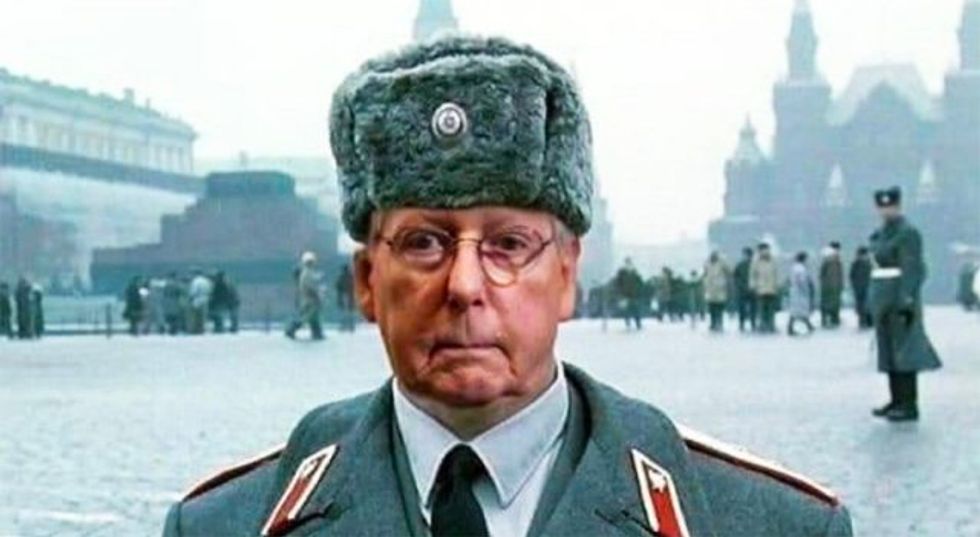 McConnell delivered Donald Trump the first major victory of his presidency months before Trump even took office. With his decision to block Merrick Garland — Barack Obama’s pick to succeed Antonin Scalia on the Supreme Court — for almost a year after Scalia's death, McConnell reshaped the future of the nation’s highest court. If Garland had been granted a fair hearings and eventually confirmed to the bench, liberals would have held a voting majority on the Supreme Court for the first time in decades. McConnell has called his unprecedented decision to block Garland, made within hours of Scalia's passing, the “most consequential” of his political career.

“I saved the Supreme Court for a generation by blocking President Obama’s nominees and led the way for Neil Gorsuch and Brett Kavanaugh,” McConnell recently bragged.

Even beyond than his refusal to fill a Supreme Court vacancy during the final year of Obama’s presidency, the majority leader’s biggest impact on the federal judiciary was his stonewalling of Obama’s lower bench appointments.

This is in large part thanks to significant rule changes ushered in by McConnell, such as diminishing debate time over district-level federal judges from 30 hours to two hours. Sen. Chuck Grassley, R-Iowa, who chaired the Senate Judiciary Committee for the first two years of the Trump administration, barred home-state senators from using their traditional "blue slip courtesy" to block judicial nominees. To no one's surprise, Trump stooge Sen. Lindsey Graham, R-S.C., who now chairs the committee, has continued this policy.

As a result, Trump has now surpassed Ronald Reagan, George H.W. Bush, George W. Bush and Barack Obama in getting federal judges confirmed by the August recess of his third year in office, according to Russell Wheeler, a visiting fellow at the Brookings Institution.

Scott Jennings, a longtime McConnell adviser, recently bragged that the Senate majority leader has “taken on this role as the principal enabler of the Trump agenda.” The Federalist Society’s Leonard Leo, who for decades has worked to get conservative judges on the federal bench — and was instrumental in the confirmations of Chief Justice John Roberts, along with Justices Samuel Alito, Gorsuch and Kavanaugh — described McConnell is “the most consequential majority leader, certainly, in modern history.”

With the notable exception of the Supreme Court, most federal judges have consistently rejected Trump’s unconstitutional policies especially but not exclusively on immigration. Now McConnell is trying to change the courts. The Kentuckian clearly understands which way the political winds are blowing: He's working overtime to fast-track a conservative judiciary that will protect moneyed interests and prevent any leftward legislative progress, even with a Democrat in the White House and a Democratic Senate.

Beyond their numbers, the records of McConnell’s right-wing judges is equally as horrifying.

This multi-generational shift in the federal judiciary has resulted in the least diverse bench in modern history, with not a single black, Latino or LGBT appointee. More than two-thirds of those confirmed are white men, with a median age is 47.5 years. Federal judges serve for life, ensuring that Trump’s legacy will be imprinted on the federal judiciary for the next three to four decades.

Several have exhibited open hostility to immigrant rights, reproductive freedom, voting rights and LGBTQ equality. Among the new circuit court judges is Steven Grasz, who defended a “partial-birth” abortion ban in front of the Supreme Court and was confirmed despite receiving a “not qualified” rating from the American Bar Association over concerns he would be “unable to separate his role as an advocate from that of a judge.” Another is Amy Coney Barrett, who was confirmed despite calling Roe v. Wade an “erroneous decision” and reportedly belonging to a private religious group where women are literally described as “handmaids.” John Bush, who once compared abortion to slavery on an anonymous blog, is also now a circuit court judge.

If Trump and McConnell are re-elected next year — the latter faces a potentially tough battle in the Bluegrass State — they will likely be able to appoint and confirm more than half of all sitting federal judges by 2024.

McConnell has blatantly been willing to let a hostile nation meddle in our elections, but he's so much more than #MoscowMitch. He has remade the federal judiciary to his own design, with the help of a corrupt and ignorant president. That will seal his legacy as the Senate’s master manipulator.