'My God, what has Mitch McConnell done?' Maddow calls out #MoscowMitch for refusing to stand up to Russia 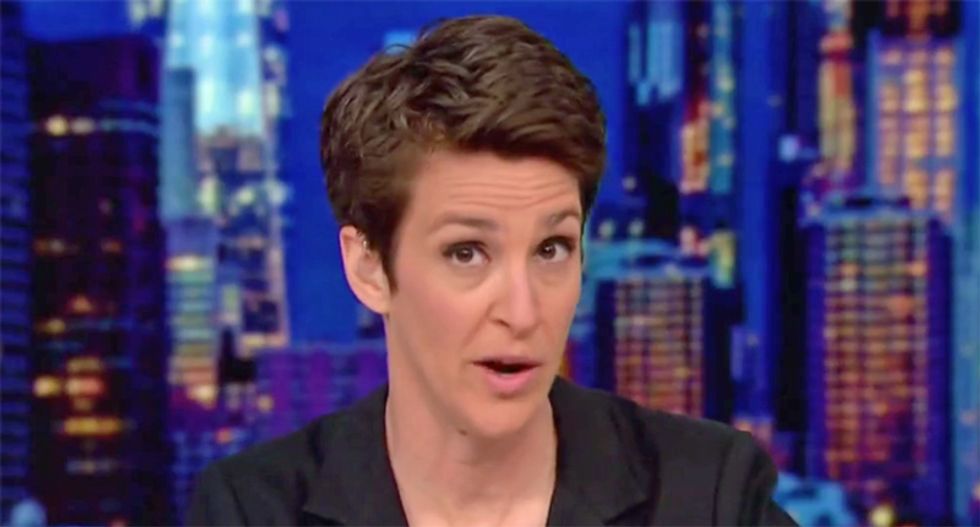 During the opener of her Wednesday show, MSNBC host Rachel Maddow flattened the one man who stopped a bipartisan effort to stand up to Russia in the name of American patriots everywhere. Instead, Senate Majority Leader Mitch McConnell (R-KY) took another route.

The self-described nerd explained that she was supposed to have a beach vacation, but tore a ligament in her ankle and ended up spending her vacation reading a Pentagon white paper instead.

She read aloud a piece of the report which revealed that the U.S. "lacks the capacity to resist and respond effectively to Russian aggression."

"But it's interesting. As worrying as it is, and as unpleasant as it is for us as a country to be so irredeemably polarized in our culture and politics right now, there actually hasn't been a 100 percent partisan divide on this issue of Russia coming after us," Maddow explained. "There's a partisan cast to how the two parties have responded, but even in this ramshackle and at times ridiculous U.S. Congress, you have had some Republican support."

She noted that there was bipartisan agreement that the country should spend increased funding on upping election security since Russia attacked our elections before and they fully intend to do so again in 2020. There was also a bipartisan effort to demand significant sanctions against Russia in retaliation for their attack on America. Yet, one man stopped the bill.

"Even back in 2016, when the attack was underway, President [Barack] Obama was willing, as president to brush back [Vladimir] Putin, tell him to cut out what he was doing," she recalled. "President Obama and his administration thought the better way to shut Putin up and honestly to make the American public less susceptible to what Russia was doing, make the American public more resilient against the types of attacks Putin was launching, that actually targeted the American people, the Obama Administration thought the best way to do that beyond President Obama doing what he did was that there should be a whole of government response, a bipartisan, bicameral, clap-back from the United States."

She said that it was intended to be not just the executive branch, not only intelligence agencies, but the whole of government standing up to an adversary attacking Americans.

"Our law enforcement and intelligence capability and it would also be the whole House and the whole Senate, both parties unanimously warning Putin, 'Back off,'" Maddow described. "'Get out of our elections, or you will face serious consequences.' The Obama Administration fully expected they could get that from the U.S. Congress when they gave Congress information about what at that point was an ongoing Russian attack on our election. I mean, why -- why wouldn't they think they could get that kind of a patriotic reaction?"

She noted that it is the type of thing that both parties come together on and have for centuries.

"That request was blocked by one man. One Republican. Kentucky Republican Senator Mitch McConnell. The leader of the Republicans in the Senate and still today," Maddow recalled. "Mcconnell said he wasn't sure if he believed the Russians were really doing what they were doing, and besides, he basically implied, 'what's the big deal?' So, thanks to Mitch McConnell, blocking what would have otherwise been a whole of government response against Russia during the campaign in the middle of their attack, that clap-back from the U.S. government didn't happen."

What has happened since, however, is that it turns out Kentucky stood to gain huge cash and jobs with a new aluminum company run by Oleg Deripaska's firm. It was reported in July that two ex-McConnell staffers lobbied their former boss on the company for Kentucky. The other piece of it is that this firm would never be possible if sanctions against Russia continued. So, McConnell put a stop to the bipartisan bill that would demand Russian sanctions continue.

So, McConnell's state scored a $200 million investment in Kentucky after blocking Russian sanctions in the Senate. Now, America is under attack again, and Maddow noted that McConnell is not only allowing it to happen, he's benefiting from it with one of the largest aluminum plants in the United States.