Neo-Nazi ‘Atomwaffen Division’ holding live-fire militia trainings at ‘The Base’ near Spokane: report 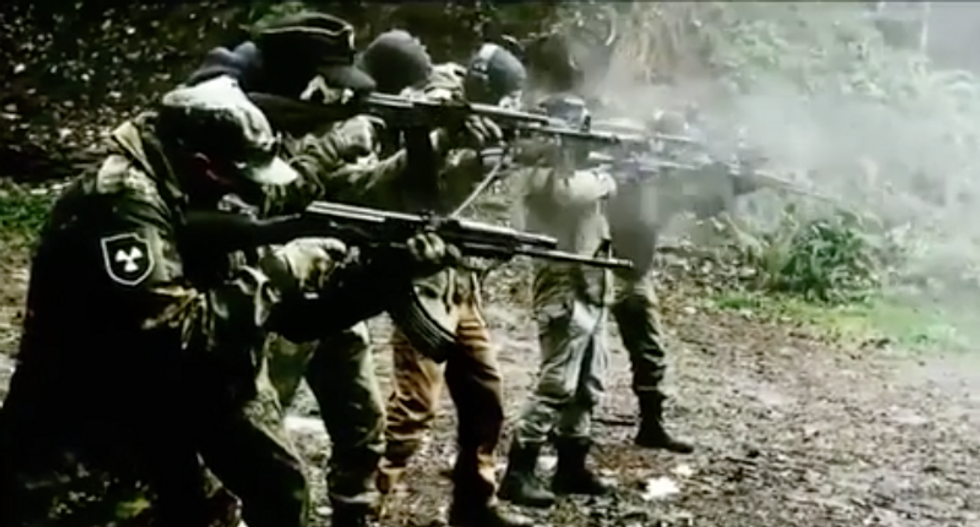 One sign of the growing white nationalist crisis in America is a new outreach effort for paramilitary training.

"A neo-Nazi group focused on providing paramilitary-style training to far-right extremists has been conducting a massive recruitment drive and claims to have already conducted live-fire training with its members," Vice News reports.

"The Base, which is connected to extreme-right groups the Atomwaffen Division and the Feuerkrieg Division, has been promoting its growth on social media with photos announcing its presence in major cities across North America, including New York, Los Angeles, and Seattle, and in Europe, South Africa, and Australia," Vice reported. "The images often include a small contingent (typically one to three) of masked, camo-clad men holding weapons standing in front of The Base's flag, a black flag with three white lines running down the centre."

"Attacks committed by far-right extremists expressing similar worldviews and ideologies are on the rise. Last week, an alleged Atomwaffen Division member was arrested for planning terrorist attacks on his local synagogue," Vice noted.

"The group is reportedly planning a 'hate camp,' a paramilitary-style training camp among militant neo-Nazis in Washington state, according to an anti-fascist group in Eugene, Oregon that has been investigating The Base. Coined by Atomwaffen Division, hate camps are intended to unify online fascists and provide them with information and skills to carry out violent attacks," Vice reported.

"The Base" is reportedly located in the Spokane area.

"The location has not been shared with me," Spokane police spokesperson Officer John O'Brien said. "The only connection to Spokane is the possibility that members of that group may fly into our airport to travel to their destination."

Joshua Fisher-Birch of the Counter Extremism Project warned of the escalation in tactics.

"The Base is particularly dangerous because of [its] focus on developing and sharing skills useful for terrorism and guerilla warfare, such as ambushes, weapons training, and making explosives," Fisher-Birch said. "This is a radical group that not only wants violence, but is preparing for it."