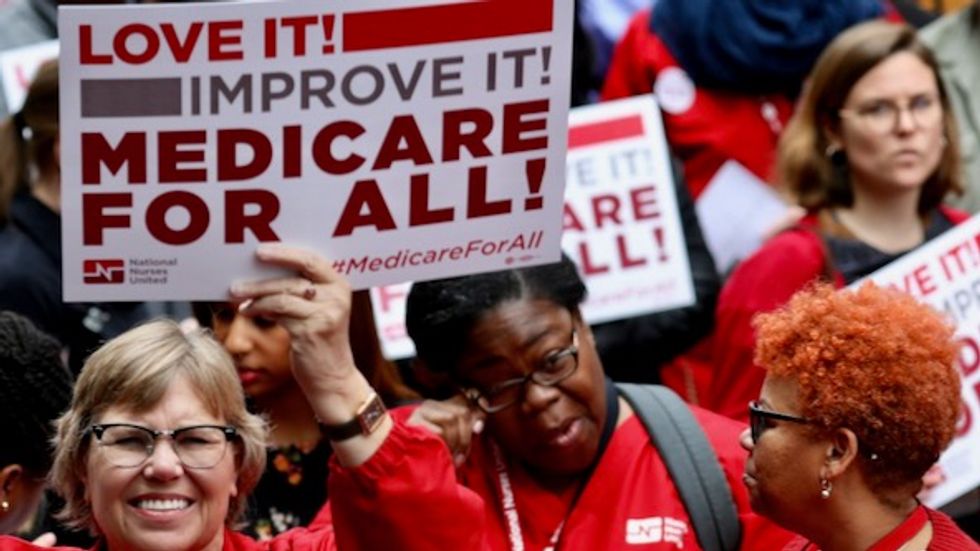 "In January, 57 percent of Democrats said they would be more likely to vote for a candidate who backs a Medicare for All health system over expanding the Affordable Care Act. That number has now risen to 65 percent."

Bolstering single-payer proponents' case that the U.S. public is hungry for transformative change to America's profit-driven and dysfunctional healthcare system, a new poll released Wednesdayfound that 65 percent of Democratic primary voters are more likely to support a 2020 presidential candidate who backs Medicare for All over incremental fixes to Obamacare.

The Politico/Morning Consult tracking survey (pdf) showed support for Medicare for All has grown substantially among Democratic voters since January of 2019, before the race for the Democratic presidential nomination began to intensify.

"Democrats are increasingly more inclined to back a 2020 candidate who supports Medicare for All versus revamping Obamacare," Tyler Sinclair, vice president of Morning Consult, told Politico. "In January, 57 percent of Democrats said they would be more likely to vote for a candidate who backs a Medicare for All health system over expanding the Affordable Care Act. That number has now risen to 65 percent."

Just 13 percent of Democratic primary voters said they would be less likely to support a candidate who backs Medicare for All, according to the poll.

"The survey suggests a level of public support for single-payer health care that could take some sting out of Republicans' plans to make Medicare for All a four-letter word they can wield against Democrats up and down the ballot in 2020," Politico reported.

Of the presidential candidates polling at the top of recent national surveys, only Sens. Bernie Sanders (I-Vt.) and Elizabeth Warren (D-Mass.) support Medicare for All. In July, former Vice President Joe Biden released a plan to expand the Affordable Care Act, and Sen. Kamala Harris (D-Calif.) unveiled a proposal that single-payer supporters denounced as Medicare for All in name only.

The survey comes just hours after Biden released an ad that used his family's history of loss to attack Medicare for All and push his own incremental proposal.

Critics accused Biden of equating Medicare for All—which would guarantee comprehensive healthcare to everyone in the U.S.—with GOP efforts to repeal Obamacare and strip insurance from tens of millions of Americans.

"Single-payer would equitably support all families through their darkest moments," tweeted writer Natalie Shure in response to Biden's ad. "Obamacare doesn't; nor would Biden's plan."

According to Biden's website, the former vice president's healthcare plan would insure an estimated 97 percent of Americans—leaving millions without health insurance.

As Common Dreams reported last month, Matt Bruenig of the People's Policy Project think tank said Biden's plan could result in the deaths of around 125,000 people over the first decade by leaving three percent of the U.S. population uninsured.

"Needless to say, this is not acceptable," said Bruenig. "No Democrat should be running on a health plan that does not provide universal coverage."