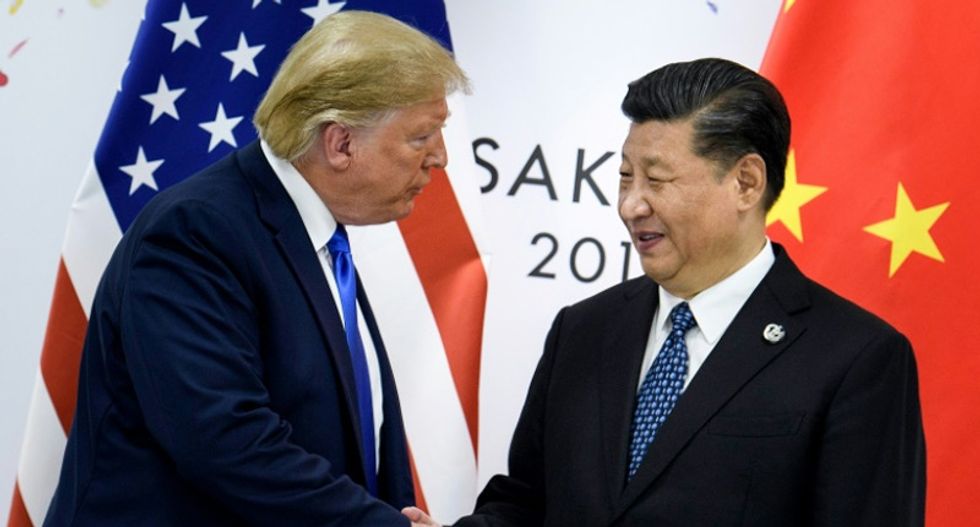 American consumers appear to be carrying the US economy in their shopping carts as manufacturing slumps amid President Donald Trump's trade conflict with China, and financial signals warn of a possible recession.

"The economy is phenomenal," Trump said Thursday. "We had a couple of bad days but we are going to have some very good days because we had to take on China."

But despite his cheerleading, a raft of new US data reports showed a mixed picture on the economy, leading Wall Street to post a modest recovery from its worst day of the year.

Longer term bond yields continued to fall with the 30-year US Treasury bond dropping below two percent for the first time ever, while the 10-year hit the lowest point in three years as investors sought safe havens to hedge against a possible downturn.

Trump continued to call on the Federal Reserve to cut interest rates, saying it made a "big mistake" by increasing too fast.

Fed Chairman Jerome Powell "should be cutting rates. Every country all over the world is cutting. We want to stay sort of even," Trump told reporters.

The US manufacturing sector, which declined in the first two quarters of the year, putting it in recession, slumped again in July and is now down 1.5 percent this year, the Federal Reserve reported.

That comes on the heels of other data showing the trade war has undermined business confidence and is curtailing investment amid the uncertainty.

"It is hard to avoid the conclusion that the industrial sector is being dragged down by overseas developments," analysts John Ryding and Conrad DeQuadros of RDQ Economics said.

Their analysis highlighted "the impact of tariffs on supply chains, and the effects of uncertainty about these policies may have had in subduing capital spending."

Although Trump has made boosting manufacturing a central focus of his economic policies, this sector makes up a dwindling share of the US economy.

Even before Trump gave retailers an early Christmas bonus by delaying tariffs on more than half the $300 billion in Chinese goods targeted for new 10 percent punitive duties, Americans' spending habits were buoying the economy.

That trend continued in July, the first month of the third quarter, as retail sales jumped 0.7 percent, far more than expected, driven by e-commerce and Amazon's 48-hour prime "day," according to new data from the Commerce Department.

"The United States is now, by far, the Biggest, Strongest and Most Powerful Economy in the World, it is not even close!" Trump tweeted. "As others falter, we will only get stronger. Consumers are in the best shape ever, plenty of cash."

Walmart -- which has been beefing up its online presence to compete with Amazon -- added to the good retail news, reporting better than expected profits in the latest quarter and boosting its forecast for the year.

"Households are in good shape with spending and that should continue as long as the labor market remains healthy," National Retail Federation chief economist Jack Kleinhenz said.

But he warned that financial market volatility and "increased trade tensions in recent weeks may put a wind of caution in consumer spending as we move forward in 2019."

Trump told reporters Thursday that talks with China set for September are "still on" -- less than a week after he said they might be canceled -- and trade negotiators also have been in contact by phone.

"We're talking and they're offering things that are very good," he said, but warned that the US still has at its disposal "the ultimate form of retaliation."

And in a speech to supporters late Thursday, Trump said China had no option but to cut a deal with US.

"I never said China was gonna be easy, but it's not tough and they wanna make a deal," he said.

By December 15 all goods imported from China will face stiff US tariffs, and markets are watching anxiously for signs of progress in the dispute.

China, which has been gradually reducing its holdings of US Treasury debt, for the first time since May 2017 is no longer the biggest US creditor, according to data released Thursday. Japan retook the top spot.