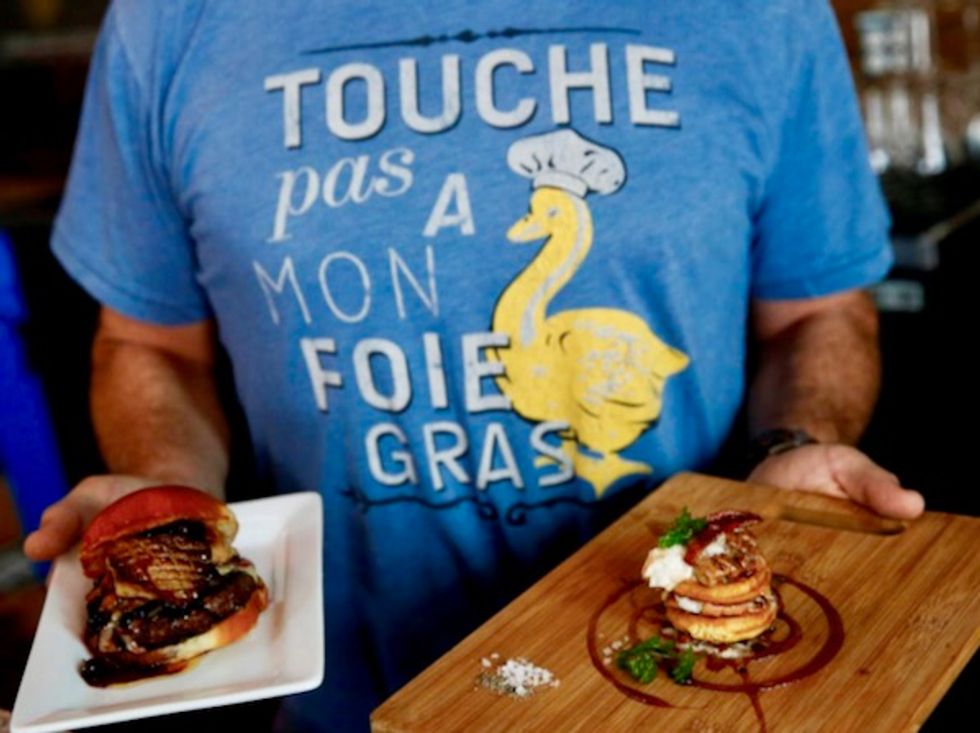 A New York City proposal to ban the sale of foie gras, the fattened liver of a duck or goose, has the backing of animal welfare advocates, but could mean trouble for farms outside the city that are the premier U.S. producers of the French delicacy.

A majority of city council members have signed on to a bill that would ban the sale of foie gras at restaurants, grocery stores or shops in the city on the grounds that the force-feeding needed to produce it constitutes cruelty to animals.

The proposed ban is viewed with alarm at Hudson Valley Foie Gras, a 200-acre (80-hectare) farm two hours north of the city in the Catskill Mountains that is the largest producer of foie gras in the U.S.

"There's a much greater than 50% chance that we wouldn't survive if we lose our New York City sales," said Marcus Henley, the farm's manager, noting that about one-third of the Hudson Valley product is sold in New York City. Another third was lost to a ban in California.

Hundreds of workers at Hudson Valley and at nearby La Belle Farm feed about 350,000 birds each year in a process that fattens the bird's liver up to 10 times its normal size.

A proposed ban on the sale of foie gras in New York City is supported by animal welfare advocates. But that could m… https://t.co/Bvdl6MH1vD
— SpazianiG (@SpazianiG) 1567128851.0

On a summer day, thousands of baby ducklings scamper through a spacious Hudson Valley barn - a giant, moving wave of fluffy yellow feathers. The force-feeding begins when the ducks are fully grown, about 12 weeks after they're born. They're fed every eight hours for three weeks, and then the birds are slaughtered.

Humans would gag at having a tube stuck down their throat, but birds don't have that reflex, Henley said. He notes that the process mimics something that happens in the wild, when ducks and geese overeat to store up extra nutrition for their long annual migration.

"In observing the behavior of our animals, we see no sign of stress or discomfort," Henley said.

Opponents of the practice strenuously disagree and say the force-feeding is barbaric.

"We are torturing an animal in order to alter it into a diseased state, so we can satisfy our addiction to taste," Dr. Andrew Kaplan, a veterinarian, told a City Council hearing in June.

The principal sponsor of the bill in the City Council agrees.

"I can think of nothing more common-sense than ending the egregious practice of selling a luxury food item made from the gruesome abuse of animals," says Carlina Rivera, a Manhattan Democrat.

City Council leaders have yet to schedule a vote on the bill.

Chicago banned foie gras in 2006, but the ordinance was repealed amid a backlash in 2008 after then-Mayor Richard Daley called it "the silliest law that they've ever passed."

California banned the delicacy in 2012, a step challenged in federal court by plaintiffs including Hudson Valley Foie Gras, which said it lost nearly one-third of its total sales when the ban took effect. A federal appeals court eventually upheld the ban.

If the New York bill passes, violators in the city's five boroughs could be penalized with a $1,000 fine and up to one year in prison.

Though foie gras was first eaten by ancient Egyptian pharaohs, the delicacy has long been associated with France, which is historically both its largest producer and consumer.

"Who are they to decide what we can eat, or cannot eat? If you decide that you're going to stop foie gras, where is it going to end?" asked Ariane Daguin, the chief executive of foie gras distributor D'Artagnan, adding that someone could decide people shouldn't eat factory-farmed chickens.

Henley, Hudson Valley Foie Gras' manager, said if the New York bill passes, the company might move to Canada, where he could save on overhead expenses by joining forces with other producers.