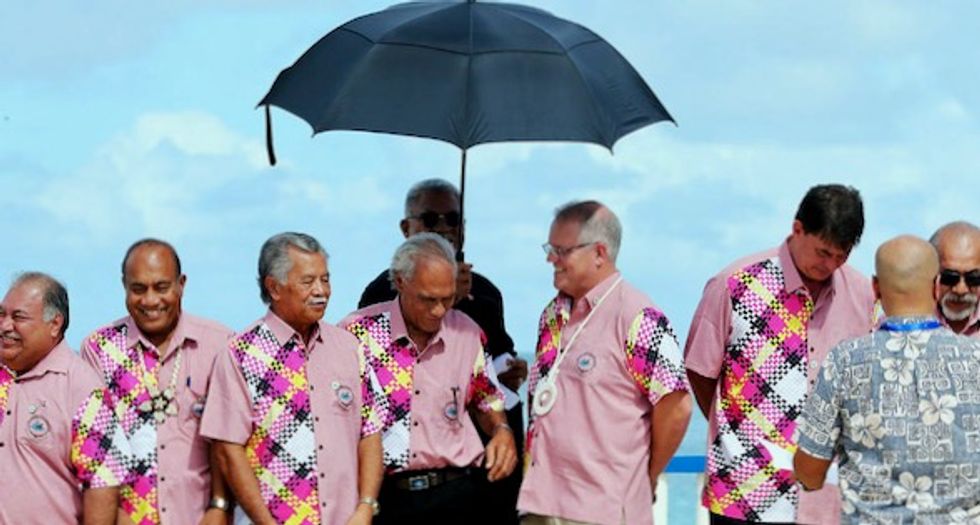 A Pacific summit has descended into tears, recriminations and shouting between pro-coal Australia and low-lying island nations facing an existential threat from climate change.

The annual Pacific Island Forum wrapped up in Tuvalu late Thursday with Australia and the group’s 17 other members sharply at odds, potentially undermining Canberra’s efforts to curb China’s growing influence in the region.

“There were serious arguments and even shouting, crying, people, leaders were shedding tears,” Tuvalu Prime Minister Enele Sopoaga told Australia’s national broadcaster ABC after the summit broke up with a communique with “watered down” language on global warming.

The group had gathered in Funafuti hoping to issue a compelling global call to action from nations on the frontline of climate change ahead of UN talks in New York next month.

But Sopoaga conceded that a climate statement and communique released in the early hours of Friday morning after 12 hours of tense negotiations fell short of expectations.

“I think we can say we should’ve done more work for our people,” he told reporters.

The joint statements refer to a climate crisis and reiterate previous warnings that global warming is the most serious threat facing the Pacific.

“The time to act is now,” the leaders said.

But there was no direct mention of ending coal-fired power, while calls to limit temperature rises to 1.5 degrees Celsius and achieve zero net carbon emissions by 2050 were couched as suggestions rather than demands.

“We came together in a nation that risks disappearing to the seas, but unfortunately, we settled for the status quo in our communique,” Fiji Prime Minister Frank Bainimarama tweeted.

#PIF2019: We came together in a nation that risks disappearing to the seas, but unfortunately, we settled for the s… https://t.co/BCuOnhF62H
— Frank Bainimarama (@Frank Bainimarama)1565877683.0

Morrison, who has long championed Australia’s lucrative coal industry, concedes climate change is real but insists it can be managed in a way that does not hurt the economy.

He denied differences with Pacific Island leaders over climate would damage Australia’s “Pacific step-up”, a push to restore Canberra’s leadership credentials in the region and push back against Beijing’s diplomatic inroads.

“We showed up, we’re stepping up, and it’s getting on,” the Australian leader said.

Australia, the largest and wealthiest Pacific Island Forum member, fears that China’s long-term plan is to establish a military base in the Pacific.

Samoa’s Prime Minister Tuilaepa Malielegaoi said this week that Pacific leaders would not turn away a generous aid donor.

“Their enemies (Australia and its allies) are not our enemies,” he said.