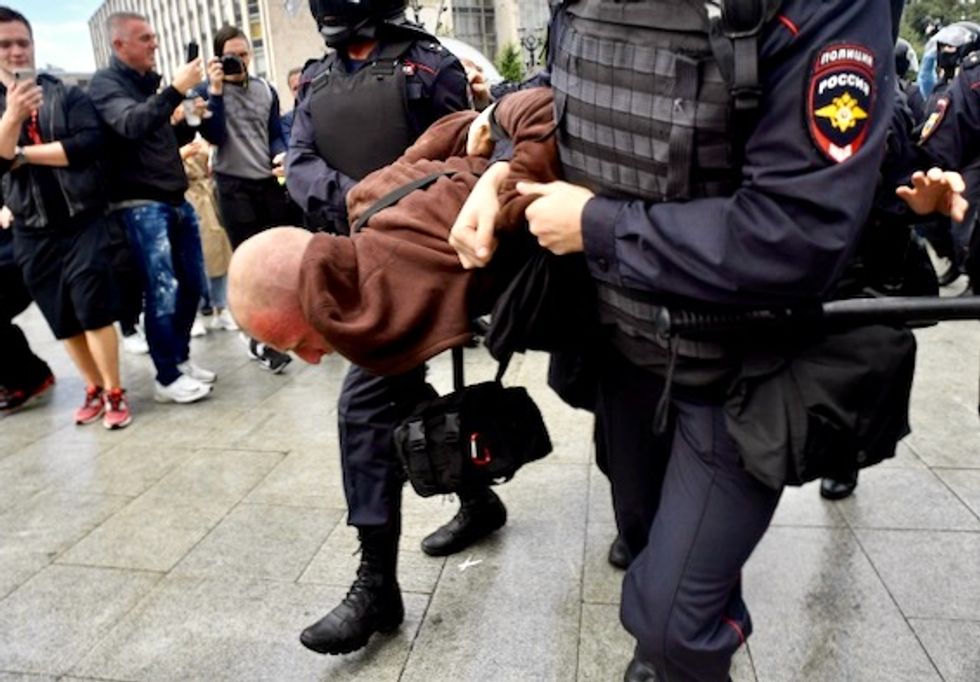 At least 89 were detained by police about an hour into the rally, according to OVD-Info, a non-governmental organisation that operates a hotline for detainees AFP / Alexander NEMENOV

Police detained hundreds of protesters at an unauthorised opposition gathering in Moscow on Saturday, as authorities upped the pressure on top Kremlin critic Alexei Navalny by launching a criminal probe into his anti-graft group.

Crowds of people marched in the capital's central boulevards for a protest "stroll" over the refusal by officials to let a number of opposition candidates run in September polls for city parliament seats.

Most of those candidates and opposition leaders, including Navalny, are being held by police following a protest rally last weekend, in which 1,400 demonstrators were detained -- one of the biggest crackdowns in years.

On Saturday, riot police were deployed in large numbers in central Moscow, some shops and cafes were shut, metal barriers were erected and the mobile internet was down for several hours.

At least 300 people were detained by police about two hours into the rally, according to OVD-Info, a non-governmental organisation that operates a hotline for detainees.

AFP correspondents also observed dozens of arrests along the route of the protest, as lines of police attempted to break up the flow of the crowd by blocking it with a human chain and grabbing people indiscriminately.

Lyubov Sobol, currently three weeks into a hunger strike after being barred from taking part in the local polls and an ally of key opposition leader Navalny, was dragged from a taxi and detained Saturday as she set off for the rally.

Many opposition leaders who attempted to run in the polls next month argue that the authorities have arbitrarily declared signatures they gathered to qualify invalid.

People in the crowd on Saturday said they just want the opposition to have a chance to run.

"I want there to be big changes... now there is an atmosphere of total control," Varvara, a 22-year-old artist, told AFP.

"I believe everyone should have a right to take part" in the polls," 39-year-old Robert said.

Riot police appeared to outnumber small groups of protesters who were walking along stretches of the leafy Boulevard Ring.

In the polls in September, the opposition hopes to end the monopoly of Kremlin loyalists in Moscow's parliament.

The body decides the city's multi-billion-dollar budget but lacks political independence from mayor Sergei Sobyanin, an ally of Putin.

Sobyanin has warned the opposition against "new provocations".

Navalny and other protest leaders argue corruption is rife in the capital. His anti-corruption foundation FBK this week published a new investigation into Sobyanin's deputy, accusing her of selling prime Moscow property to family members at rock-bottom prices.

On Saturday, FBK, which previously made other high-profile investigations into the questionable wealth of top officials, became a target of a new probe into "laundering" a billion rubles ($15.3 million).

Employees of the Foundation for Fighting Corruption (FBK) "received a large sum of money from third parties which they knew was procured illegally," investigators said.

"Accomplices" of FBK "gave a legal appearance" to the funds by transferring them to bank accounts and ultimately to the accounts of the FBK, they said.

The popular FBK collects money through donations, and Navalny's ally Leonid Volkov dismissed allegations of money laundering as an attempt to stamp out Navalny's national network of volunteers.

Navalny, currently in jail, was rushed to hospital last weekend in an incident his personal doctor blamed on possible poisoning with an unknown chemical substance.

A state toxicology lab said no traces were found.

President Vladimir Putin has yet to comment on the situation in Moscow.