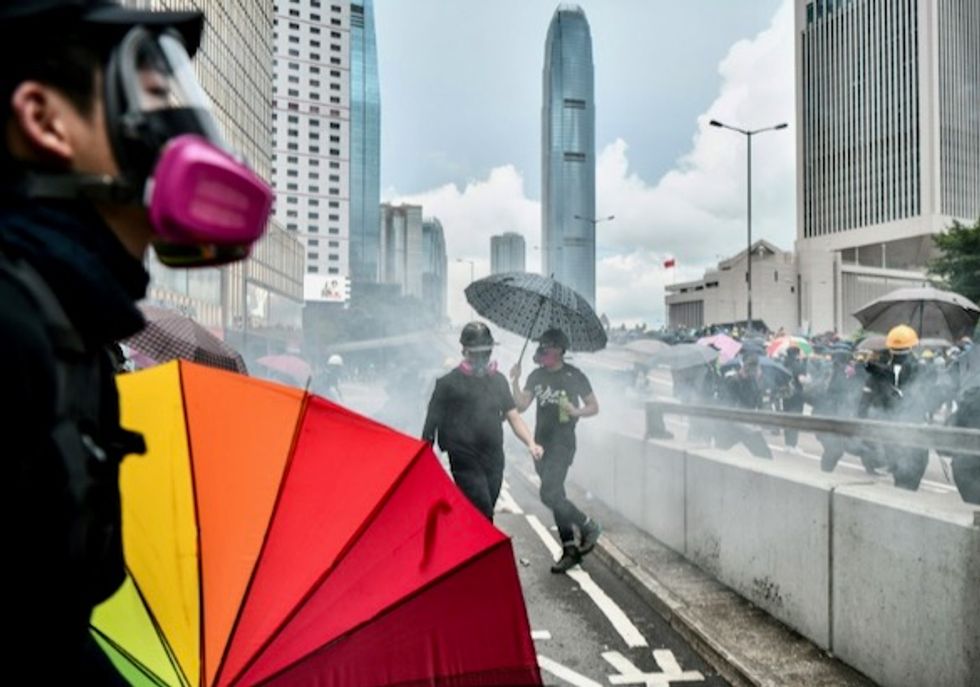 Chaos engulfed the financial heart of the city, with hardcore protesters throwing rocks, starting fires and shining laser pens at a rank of police behind a barricade at the city parliament AFP / Anthony WALLACE

Police fired water cannon and tear gas to clear Hong Kong pro-democracy protesters from outside the city's parliament on Saturday, as demonstrators defied a ban on rallying and the arrests of leading activists to take to the streets for a 13th straight weekend.

Police had banned the demonstration on security grounds, then organizers had cancelled it, after last weekend saw some of the most violent clashes in months of political turmoil.

But large crowds, many in their signature black T-shirts and under a colorful canopy of umbrellas, snaked through Hong Kong island anyway, blocking roads and chanting "reclaim Hong Kong, revolution of our times".

Chaos engulfed the financial heart of the city, with hardcore protesters throwing rocks, starting fires and shining laser pens at a rank of police behind a barricade at the city parliament known as the Legislative Council (LegCo).

Police fired a water cannon and rounds of tear gas to disperse protesters, who hit back with a barrage of molotov cocktails that left fires burning.

As dusk drew in, protesters smashed through the barrier outside the parliament building, but were repelled by tear gas and jets of blue-colored liquid fired from the water cannon.

The LegCo was stormed on July 1 -- the 22nd anniversary of the handover of Hong Kong from British to Chinese rule.

Earlier on Saturday protesters marched by the official residence of Hong Kong's embattled Beijing-backed leader Carrie Lam, who is the focal point of anger after trying to pass a bill which would have allowed extradition to China.

"I'm prepared for the consequences of coming out," said one protestor, who gave his name as Jay, adding "Hong Kongers have the right to assembly."

AFP / Lillian SUWANRUMPHA A man dressed as Moses with the 'Five Commandments' referring to protesters' demands, joined one demonstration

Opposition to the extradition bill -- now suspended but not permanently withdrawn -- has brought much of Hong Kong to the streets.

The protests have expanded into a wider pro-democracy call and a rejection of attempts by Beijing to curtail the freedoms of the semi-autonomous territory.

Protesters were in defiant mood throughout Saturday, which marked the fifth anniversary of Beijing's rejection of a call for universal suffrage for Hong Kong that sparked the 79-day "Umbrella Movement" in 2014.

"I'm not afraid to come out here today," said another 25-year-old protester who gave his surname as Ng.

Many protesters are determined not to let the new movement fizzle out as the Umbrella protests did.

"It's 'now or never' for Hong Kong," said a 33-year-old accountant who gave her surname as Wong.

"I'm a mother-of-two. They didn't come today but their grandmother did. We're defending the right of assembly for the next generation in Hong Kong."

At least five high-profile activists and three lawmakers were arrested on Friday in a sweep aimed at defanging Saturday's rally.

AFP / Laurence CHU Factfile on Joshua Wong, Agnes Chow and Andy Chan who have been arrested ahead of the 5th anniversary of Beijing's rejection of a call for Hong Kong universal suffrage

Two of the Umbrella Movement's leaders, Joshua Wong and Agnes Chow were among those arrested, charged and bailed for "inciting others to take part in unauthorized assembly".

The European Union's diplomatic chief Federica Mogherini said the developments were "extremely worrying", while US President Donald Trump said his economic pressure on China was forcing Beijing to take a more moderate line in Hong Kong.

In an attempt to sidestep Saturday's protest ban, crowds earlier carried Christian crosses and sang "Hallelujah" in religious gatherings -- which do not require the same stringent permission from authorities.

The demonstrators, who have earned a reputation for their creativity and unpredictability, also called for "mass shopping trips" in the city centre.

On Saturday morning, LIHKG, the Reddit-like forum used by protesters to communicate, reported via Twitter that its app had suffered the "largest attack it has ever seen".

Police on Friday confirmed three lawmakers -- and a district councillor -- had been arrested over their alleged actions in previous protests, but denied the sweep was timed specifically to weaken the weekend's protests.

More than 900 people have been arrested since June in connection to protests.

Hong Kong's crisis-hit government has refused to back down over the protests, which have seen millions march peacefully through the streets but also hardcore groups of radical protesters hurl bricks and petrol bombs at police armed with tear gas and rubber bullets.

The violence has damaged Hong Kong's reputation for stability and prosperity.

China has responded with a campaign of intimidation. State media on Friday reported that fresh military anti-riot drills were held across the border in Shenzhen.