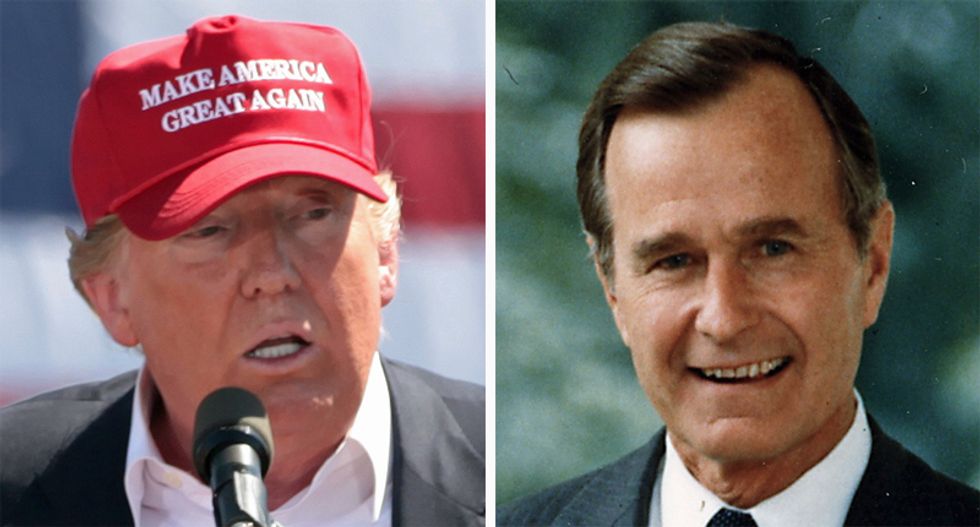 President Donald Trump may end up a one-term president, given he seems to be walking in President George H.W. Bush's footsteps says a former economics assistant professor in his column at Bloomberg Opinion.

Trump's tariffs, if they all go into effect, "will amount to a $200 billion annual tax increase," writes Karl Smith. "That’s larger than the $165 billion average annual reduction in 2017’s Tax Cut and Jobs Act."

As it is, most Americans say they didn't feel the Trump tax cuts, and that's likely because they were designed to greatly benefit the wealthy – despite Trump's lies to the contrary.

"If fully implemented, this next phase of Trump’s tariffs will cost the average household up to $1,795 per year — $495 more than the bank’s estimate of the average increase in disposable income from tax reform," Smith reveals.

"In his 1988 campaign, Bush famously asked the public to read his lips when he promised 'no new taxes,'" Smith writes.

"The final package included increases in both income and payroll taxes and went into effect in 1991. In the next year’s campaign, Bush had to deal with rising unemployment and withering criticism in both the primary and the general election over his decision to go back on his pledge."

"Bush’s brazen break with Republican orthodoxy, along with a sluggish economy and broken promises, made him a one-term president. If Trump’s not careful, he may join him," he observes.

Indeed, recession fears are spiking, it's clear – and economists tell us – the economy is already slowing down. And just last week Trump's own Dept. of Labor revealed the economy in 2018 produced 500,000 fewer jobs than originally thought.

Trump of course will never, ever acknowledge that he's effectively raising taxes, because he lies habitually, cannot ever admit mistakes, and repeatedly – and falsely – continues to claim that China is paying the tariffs, which most Americans now know is a load of malarkey.

"This combination of weak growth, a rising tax burden and broken promises echoes the 1992 election. In addition, Trump is already accumulating primary challengers who will no doubt criticize him for his failure to deliver. When the Democrats pile on, it will be that much harder for the president to make his case for re-election," Smith says.

He's right, and it will be expensive for most Americans. And perhaps, finally, something will cost President Trump the White House.