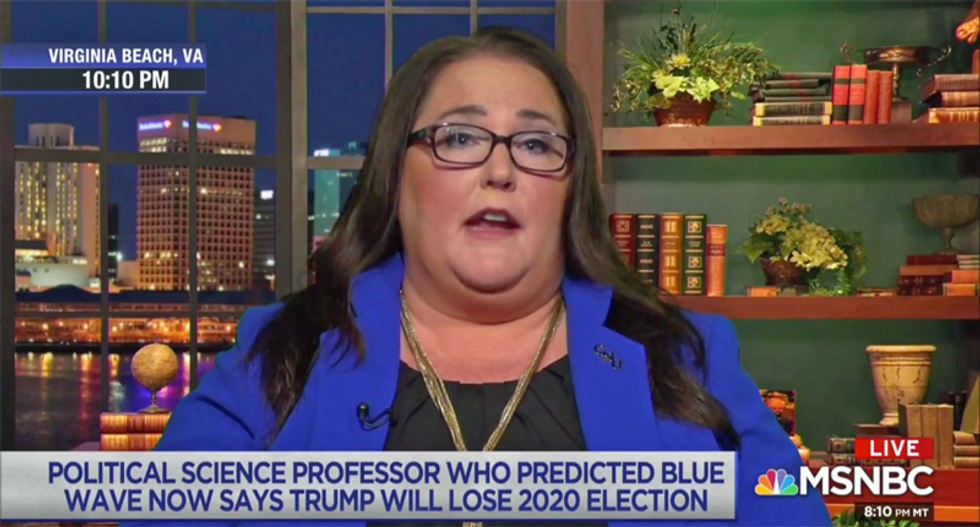 The political scientist who correctly predicted the 2018 elections says Democrats left seats on the table in the midterms -- and can win them in 2020.

"Could you explain to the viewers how it is you determine what it was that actually did win a given congressional district?" O'Donnell asked. "When there is this common belief that, oh, well, the Democrats ran because the Republicans threatened their health care and so some swing voters switched over from Republican voting to democratic voting."

"I’m really glad you asked that. I mean, what I’m arguing is not just a model, it’s a whole fundamental shift in how you understand elections and it’s two-fold," Bitecofer replied.

"Number one, I’m arguing the way to understand elections in terms of competitiveness now is really based on two things, partisan competition, which is basically a measure of polarization. So a district or a state has to have a certain level of competition that is doable," she explained.

"But the other thing that I identified is this realignment that’s going on in the electorate and the demographic that’s really a great indicator of that is college education. So for a long time, Republicans had the advantage with college-educated voters, but as you were just citing in that polling data, college education is now it’s an indication of Democratic vote support, not Republican," she noted. "And, you know, the obvious reasons for what you’ve been watch going on in the Republican Party over this last decade."

"So when I looked at my model, that’s what I was looking for is, not, you know, just do you have a compelling story like Amy McGrath, but do you have these district conditions that can produce this huge turnout surge that it can flip," she explained.

"And that’s why, you know, Democrats they did quite well in the midterms, but they left things on the table and I identify, you know, 18 races -- especially in Texas -- where Democrats just failed to understand, oh, high rates of college education, high rates of diversity in suburban areas around Dallas that they could have picked up in the last cycle and if they target it in 2020, they should be able to pick up in this cycle," she concluded.