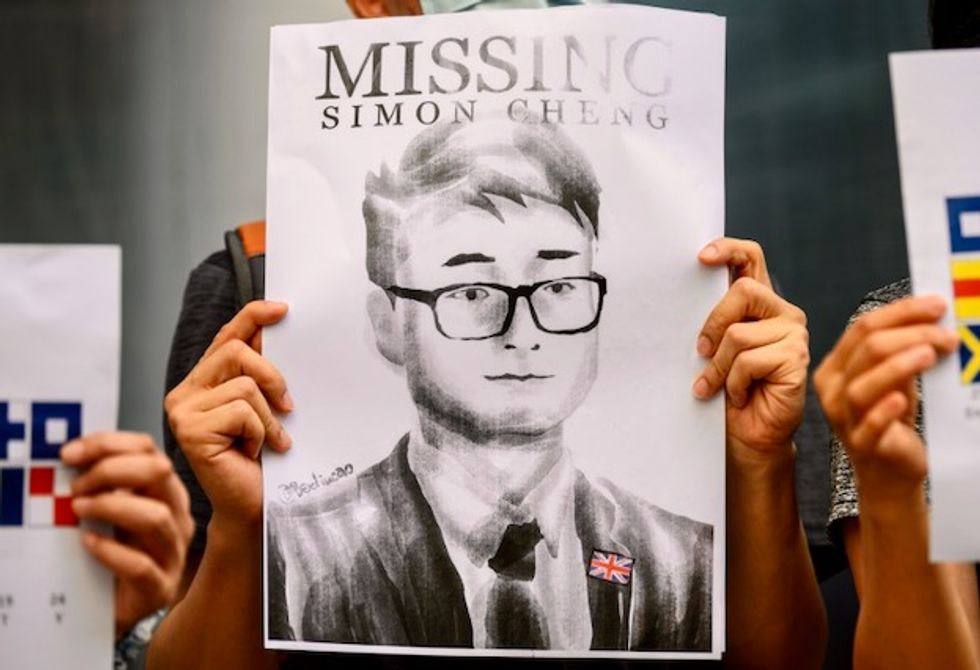 Activists in Hong Kong have been rallying in support of British consulate employee Simon Cheng, who has been detained by mainland authorities AFP / Anthony WALLACE

The family of a staffer at the UK consulate in Hong Kong have rejected a "made-up" report by Chinese state media that he was detained in the mainland for visiting prostitutes.

Simon Cheng disappeared after visiting the city of Shenzhen from the semi-autonomous city on August 8, and the Foreign Office in London said both British officials and relatives have been unable to speak to him since.

The Global Times, a tabloid state-run newspaper, said he had been detained for "soliciting prostitutes", citing police in Shenzhen, which lies on the China-Hong Kong border.

But a Facebook page run by Cheng's family dismissed the report.

"This is a made-up crime of soliciting prostitution, everyone should see it's a joke," the comment said.

Beijing confirmed on Wednesday that an employee of the British consulate had been "placed in administrative detention for 15 days as punishment" by police in Shenzhen for breaking a public security law.

The foreign ministry said he was "a Hong Kong citizen, he's not a UK citizen, which is also saying he's a Chinese person".

In an editorial on Friday, the tabloid said it was at Cheng's request that police did not contact his family and that "thanks to the British foreign ministry and media, which have been hyping it, the case is now fully exposed".

Cheng was in the process of returning via high-speed train on August 8 and sent messages to his girlfriend as he was about to go through customs.

He has not been seen or heard from since.

The family said it had hired a lawyer in Shenzhen who had been unable to find or speak to the detained consulate employee.

Police in Shenzhen did not reply to AFP's request for comment.

A photo of a man wearing square, black-framed glasses and a woman in a low-cut top was circulating widely in Twitter and Facebook posts which claim it shows Cheng with a sex worker.

The misleading posts said Western media had "wantonly attacked China" and "forced" China to report the case in detail.

The posts also include two photos of Cheng, which show him wearing square, black-framed glasses -- images which first appeared in the Global Times report that first published allegations that Cheng had been detained for "soliciting prostitutes".

But the photo of the man with the woman had circulated online long before Cheng's detention, in YouTube posts and on forums about privacy concerns in China.

The incident has further strained relations between Britain and China over what Beijing calls London's "interference" in pro-democracy protests that have wracked Hong Kong for three months.

"The so-called serious concern of the British side does not hold water and we have made stern representations to the UK side on its mistaken remarks on Hong Kong-related affairs many times," said Geng Shuang on Friday.

"We urge the British side to stop making irresponsible remarks, stop butting in to Hong Kong affairs and stop interfering in China's internal affairs."

A spokesperson for the British Foreign Office said Thursday that it was continuing "to urgently seek further information about Simon's case".