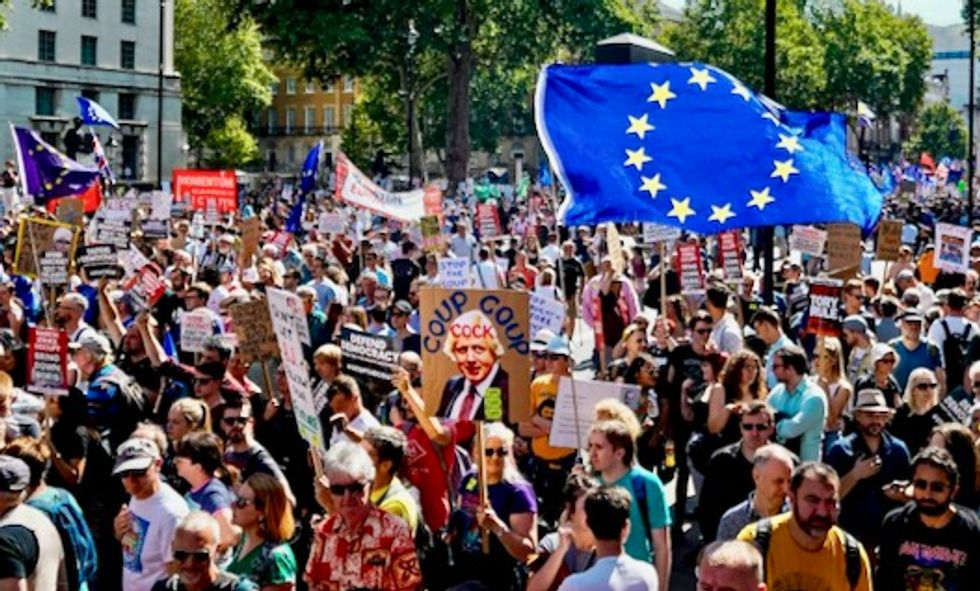 The protests come ahead of an intense political week in which Johnson’s opponents will seek to block the move in court and legislate against a no-deal departure from the EU and could even try to topple his government in a no-confidence vote.

Thousands of protesters took to the streets of various towns and cities from late morning, with organisers using the slogan #StopTheCoup saying they hoped hundreds of thousands would take part.

The left-wing group Momentum, closely allied with the main opposition Labour Party, called on its supporters to “occupy bridges and blockade roads” ahead of the protests.

Crowds gathered in Manchester, York and Newcastle in northern England, the Scottish capital Edinburgh and Belfast in Northern Ireland, with events planned in around 30 locations.

The biggest demonstrations were expected in London, where thousands of whistle-blowing, drum-banging people, many waving EU flags, had converged on Downing Street by lunchtime chanting “Boris Johnson shame on you!”

They also held hand-written signs reading “defend democracy: resist the parliament shutdown” and “wake Up UK! Or welcome to Germany 1933”.

“The decision about what happens to Brexit shouldn’t be a matter of what Boris Johnson decides,” said Bernard Hurley, 71, who turned out in Westminster.

“He’s taken the decision away from parliament which is undemocratic.”

Around a dozen shaven-headed men draped in Britain’s national flag walked through the crowds escorted by police shouting: “What do we want? Brexit! When do we want it? Now.”

Johnson, who only came to power a month ago following a Conservative Party leadership election, has promised to lead Britain out of the European Union on October 31 with or without an agreement with Brussels.

He has said he is ready to strike a deal as long as provisions for Britain to stay in the customs union even after Brexit are cut from an existing deal struck by his predecessor Theresa May.

But EU leaders have said they are still awaiting concrete proposals from London.

Johnson’s Brexit adviser David Frost is expected back in Brussels for talks next week.

Opposition MPs and some lawmakers from Johnson’s own Conservatives want him to delay Brexit beyond October 31 if he fails to strike an agreement with the EU.

The government meanwhile is ramping up preparations in case of no-deal.

Finance Minister Sajid Javid on Saturday defended parliament’s suspension, despite saying during the recent Conservative leadership contest when he stood against Johnson that “you don’t deliver democracy by trashing democracy”.

“It doesn’t usually sit for some time in September and early October,” he told BBC radio.

Johnson on Friday cautioned MPs against trying to hamper his plans, saying a decision to delay Brexit again would do “lasting damage” to public trust in politics.

He said the opposition’s efforts could in fact help lead to a no-deal Brexit as EU counterparts would be less likely to offer a compromise if they believed Brexit could be stopped.

The move was widely seen as a way of limiting the time Johnson’s opponents have to organise against him.

Labour has said it is also mulling a no-confidence vote in Johnson’s Conservative government, which commands a fragile 320 to 319 majority.

An online petition calling for the government to reverse its suspension has garnered more than 1.6 million signatures.

In the courts, a Scottish judge is expected to hear a legal challenge against the suspension on Tuesday the same day MPs return from their summer break for their shortened parliamentary session.

There will be a separate court hearing Thursday for another challenge that is being supported by John Major, a former Conservative prime minister and staunch opponent of Brexit.