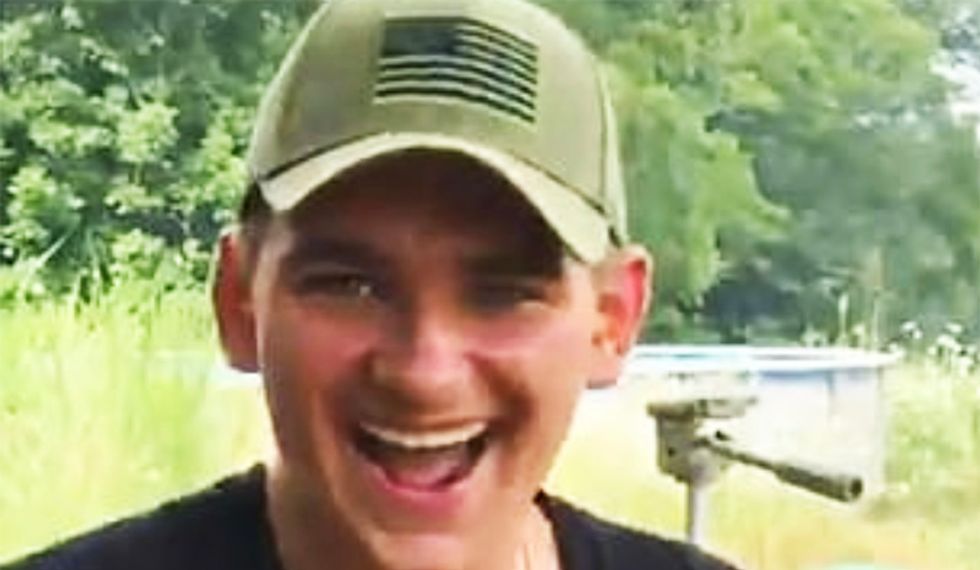 Dmitriy Andreychenko, the man who was arrested on Thursday after entering a Missouri Walmart while armed, says he did so as a "social experiment" to test his Second Amendment rights.

Andreychenko is reported to have told investigators, "I wanted to know if that Walmart honored the Second Amendment," according to CNN. He walked into the Springfield Walmart while wearing body armor and carrying a handgun and a rifle. The rifle was slung across his chest as he pushed a shopping cart and used his cell phone to record himself. No one was injured or attacked, and Andreychenko says that he shared his plans with his sister prior to the apparent stunt.

Although Andreychenko claims that he was protected by the Second Amendment, law enforcement officials disagree.

"Missouri protects the right to open carry a firearm, but that right does not allow an individual to act in a reckless and criminal manner, endangering other citizens. As Justice Oliver Wendell Holmes famously explained, 'The most stringent protection of free speech would not protect a man ... falsely shouting fire in a theater, causing a panic,'" prosecuting attorney Dan Patterson said in a statement.

Police Lt. Mike Lucas disputed the idea that Andreychenko's intentions were harmless, citing the recent series of public shootings and insisting that Andreychenko is "lucky to be alive still."

"All we know is the fact that he walked in here heavily armed with body armor on, in military fatigues and caused a great amount of panic inside the store. So, he certainly had the capability [and] the potential to harm people," Lucas said.He added, "And then obviously what's happened in Texas and Dayton and all that kind of stuff in the last seven days — that's on everybody's mind."

"This was a reckless act designed to scare people, disrupt our business and it put our associates and customers at risk. We applaud the quick actions of our associates to evacuate customers from our store, and we're thankful no one was injured," Walmart spokesperson LeMia Jenkins said in a statement, according to CBS News.

Another report indicates that Andreychenko cited regional politics as another factor in his decision to arm himself before entering the Walmart.

"This is Missouri. I understand if we were somewhere else like New York or California, people would freak out," Andreychenko told law enforcement, according to The Washington Post.

The Associated Press shed light on the background surrounding Andreychenko's stunt, with the man's wife and sister both stating that he told them of his plans and that they warned him against them.

His wife, Angelice Andreychenko, told investigators that she warned him it was not a good idea, adding that he was an immature boy.

His sister, Anastasia Andreychenko, said he had asked her if she would videotape him going into Walmart with a gun and she also told him it was a bad idea, according to the probable cause statement.

Missouri has not required a permit for individuals above the age of 19 to either openly or covertly carrying a firearm since January 2017.

The U.S. Supreme Court has just agreed to hear arguments in federal government's case against Texas' abortion ban, after the Dept. of Justice petitioned the Court to intervene. DOJ had asked the justices to uphold a district court's ruling that blocked the law but Friday afternoon conservatives on the nation's highest court refused to do so, allowing the near-total ban to remain the law of the land.

Contrary to several breaking news reports, the Supreme Court will not be hearing arguments on the "substance" of the federal government's case against the Texas abortion ban itself, known as SB 8, but merely "whether the US can sue 'the State, state court judges, state court clerks, other state officials, or all private parties to prohibit S.B. 8 from being enforced,'" University of Texas law professor Stephen Vladeck notes: