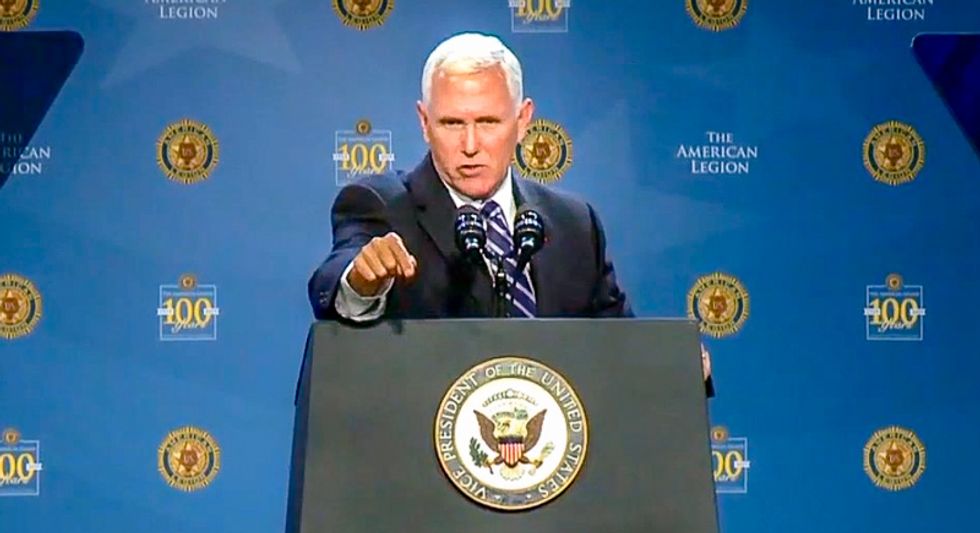 Vice President Mike Pence suggested on Wednesday that President Barack Obama is to blame for removing Bibles and other religious symbols from Veterans Affairs hospitals.

While speaking to the American Legion National Convention, Pence vowed to "make room for the spiritual needs" of veterans.

Pence complained about a U.S. Air Force veteran who sued to have a Bible removed from a memorial for missing service members.

"It's really no surprise," Pence continued. "Because under the last administration, VA hospitals were removing Bibles and even banning Christmas carols in an effort to be politically correct."

"But let me be clear," the vice president added. "Under this administration, VA hospitals will not be religion free zones."

Pence had a message for those who want to remove Christian symbols: "The Bible stays."

In fact, the policy against religious symbols at VA hospitals predates the Obama administration, according to The Florida Times-Union.

VA medical center administrator Brad Nelson told Snopes that there are no special restrictions on Christianity.

“There are no prohibitions on chaplains reading Scripture, talking about Jesus or praying in his name at chapel services, during ceremonies or when providing spiritual care to patient and families that identify with the Christian faith,” Nelson said.