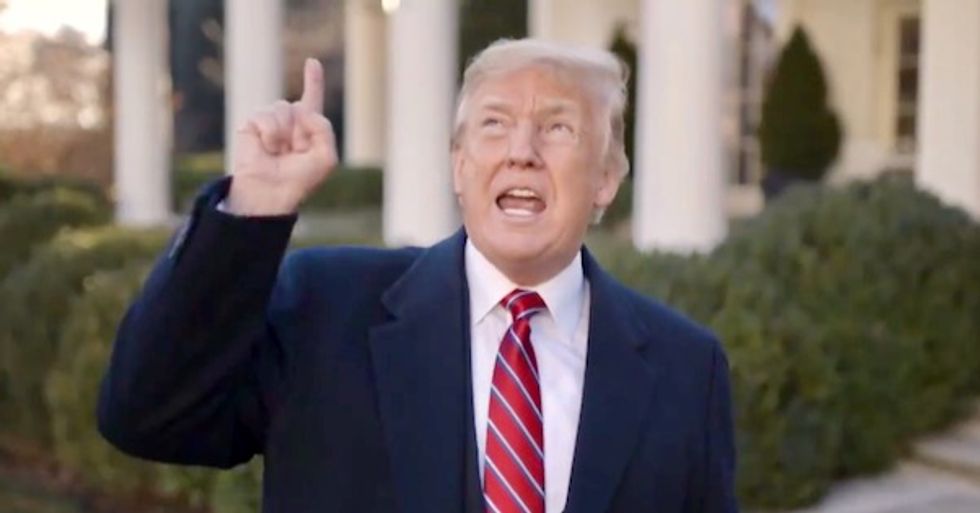 President Donald Trump is receiving some major ribbing for denying an overnight, well-sourced report that revealed he wanted to explode a nuclear bomb in the eye of a hurricane in a misguided attempt to destroy it.

“The story by Axios that President Trump wanted to blow up large hurricanes with nuclear weapons prior to reaching shore is ridiculous. I never said this. Just more FAKE NEWS!” Trump tweeted very early Monday morning.

Axios indeed reported the news, even getting a quote from an administration official praising the president for asking “tough questions” about nuking hurricanes.

“I got it. I got it. Why don’t we nuke them?” President Trump said during a hurricane briefing at the White House, Axios reports, citing a source who was there. “They start forming off the coast of Africa, as they’re moving across the Atlantic, we drop a bomb inside the eye of the hurricane and it disrupts it. Why can’t we do that?”

Trump replied by asking incredulously how many hurricanes the U.S. could handle and reiterating his suggestion that the government intervene before they make landfall.

The briefer “was knocked back on his heels,” the source in the room added. “You could hear a gnat fart in that meeting. People were astonished. After the meeting ended, we thought, ‘What the f—? What do we do with this?'”

This was not the only time Trump pushed the idiotic idea.

A 2017 NSC memo describes that second conversation, in which Trump asked whether the administration should bomb hurricanes to stop them from hitting the homeland. A source briefed on the NSC memo said it does not contain the word “nuclear”; it just says the president talked about bombing hurricanes.

Many are mercilessly mocking the president for many reasons over his desire to nuke hurricanes, not only because it wouldn’t work, but because the nuclear fallout would be spread across huge areas of the globe creating massive harm.

Axios’ Jonathan Swan is pushing back hard against Trump’s attack:

And here’s what some are saying about Trump’s denial:

@realDonaldTrump Says president who doesn’t believe in climate change, looked directly at a solar eclipse, and is a… https://t.co/CryIpXBplo
— Tony Posnanski (@Tony Posnanski) 1566811644.0

@realDonaldTrump Coming from the guy who looked straight into the solar eclipse and thinks windmills cause cancer... I believe it.
— Angela Belcamino (@Angela Belcamino) 1566811797.0

@realDonaldTrump They quoted your staff saying we like our president who asks the hard questions. Sounds realistic… https://t.co/2U813rxezu
— jmbler (@jmbler) 1566816308.0

Sarah's right, it's important to realize that Trump's talk about nuclear weapons is NOT A NEW THING. He's been fan… https://t.co/HImrQhOXRI
— Charles Johnson (@Charles Johnson) 1566780715.0

@realDonaldTrump Why is President Trump referring to himself in the third person? Hella Weird...
— Ryan Hill (@Ryan Hill) 1566811680.0

@realDonaldTrump You definitely said it. You are exactly the kind of moron who would attempt to start a nuclear war with the wind.
— James Felton (@James Felton) 1566811684.0